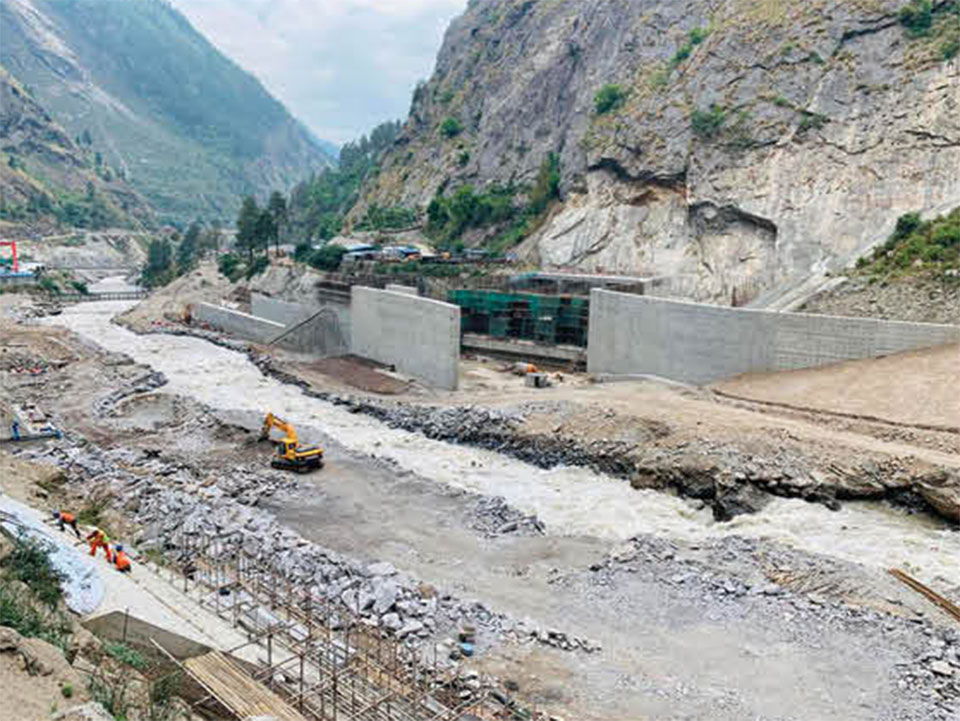 RASUWA, Aug 25: The under-construction Rasuwagadhi Hydropower Project at Timure of Gosainkunda Rural Municipality in Rasuwa district is all set to start generating power within the current fiscal year.

The project has completed 70 percent of its work, and aims to start generating power from its three units within mid-July 2020.

"Small disturbances like the flood that occurred on Sunday will not hamper the permanent structure of the project. Production will start within the stipulated time," said project head Chhabi Gaire.

"We are working in a way to complete the construction within the deadline," he added. "We are planning to add manpower to the project and schedule their duties in three shifts to expedite works."

The project is focusing on the underground structures at the moment, halting works in dam and surge shaft areas. According to Gaire, though work was not possible in the river area during monsoon, works in other areas were unaffected.

However, flood has damaged a bridge, and a study is being carried out whether it can be used or not.

The project has completed putting concrete on the intake of head box. Bharat Guragain, construction manager of the project, said work on the final spot is going on after finishing excavation of the 4,185-meter-long headrace tunnel. Under this, plastering of the floor is completed 60 percent, and the work of plastering the tunnel wall has been initiated.

Civil work has been completed in the second and third units of the project. These units are now ready for installation of stator frames. The base slab concreting has been completed in transformer cavern. China International Water and Electric Corporation (CWE), a company which is responsible for the construction of civil structures, has constructed the tunnel.

Gaire claimed that the project has made significant progress of late, after being hard hit by the 2015 earthquakes, Indian blockade, and floods and landslides that damaged and obstructed the construction works. The 111 megawatt project had started construction works in January 2014.

The plant will generate 613.87 GWh of energy annually, and will earn Rs 12.5 million per day after its starts generating power. The project that was earlier set to start generating in August 2018, could not be completed on time mainly due to earthquakes and blockade.

The Chinese company halted work for four months as landslides occurred in different places of the side. The project is being built with an investment of Rs 13.68 billion.

Chilime Hydropower Company Limited, a subsidiary of Nepal Electricity Authority (NEA), holds 33 percent stake in Rasuwagadhi Hydropower Company Limited. Likewise, depositors of Employment Provident Fund own 19 percent shares, while NEA employees and general public hold 18 percent and 15 percent of the shares in the company, respectively. The project-affected locals own 10 percent of the company's shares, while employees of promoter company and lender organizations own 3.5 percent and 1.5 percent of the shares, respectively.

RASUWA, Aug 27: The influx of visitors in tourist destinations of Rasuwa district has increased of late. The number of... Read More...

RASUWA, June 10: There has been no syndicate-type operation at the customs point in Rasuwagadhi along the northern border, according... Read More...

Hearing on case against Madhav Nepal, Speaker prolonged
15 hours ago