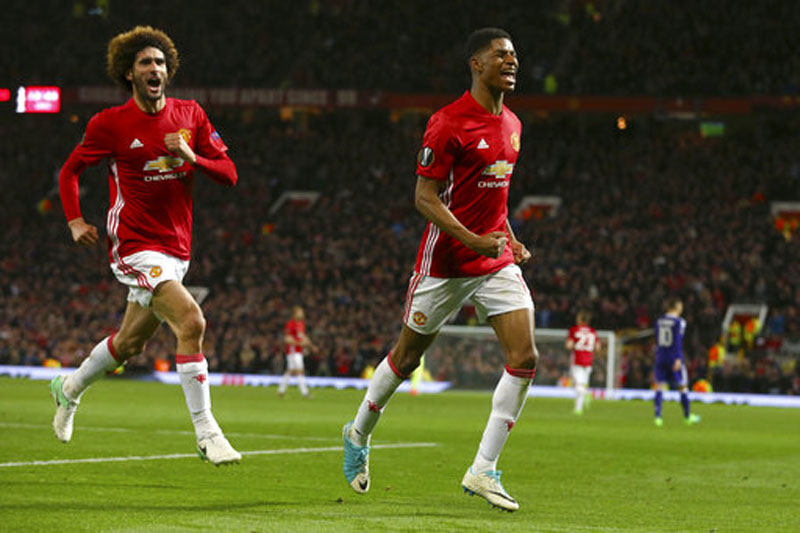 MANCHESTER, April 21: Teenage striker Marcus Rashford enhanced his reputation by stepping up in the absence of the injured Zlatan Ibrahimovic to steer Manchester United into the Europa League semifinals with an extra-time winner against Anderlecht.

Showing coolness beyond his years, Rashford deceived two defenders in the penalty area with a Cruyff turn and slotted home a shot in the 107th minute to give United a 2-1 win at Old Trafford.

United advanced 3-2 on aggregate to join Lyon, Ajax and Celta Vigo in the last four, after a tension-filled night of quarterfinal second legs in Europe's second-tier continental club competition.

The Europa League was the competition in which Rashford made his senior breakthrough last season, scoring twice on debut against FC Midtjylland as an 18-year-old unknown. He's now an England international and one of the hottest prospects in European soccer.

Rashford may have to take on the mantle of being United's chief striker for the last month of the season after Ibrahimovic hobbled off in the final minutes of normal time after hyperextending his right knee on landing, having chested down a long ball into the area.

The Swedish striker appeared to be in pain and held his head in his hands as he was being treated.

"Fairly negative," Mourinho said of injuries to Ibrahimovic and center back Marcos Rojo, who went off injured in the first half.

There is barely a month left in Ibrahimovic's first season at United, and he is yet to commit to another year.

With the teams level at 1-1 after the first leg in Belgium last week, Henrikh Mkhitaryan put United ahead on aggregate with a 10th-minute strike at Old Trafford only for Sofiane Hanni to equalize in the 31st.

The draw for the Europa League semifinals takes place Friday.

Here's a look at how the other quarterfinal matches turned out:

Lyon's players held their nerve to beat Besiktas in a tense penalty shootout.

The first 12 spot kicks were clinically struck, before Dusko Tosic had a penalty saved for Besiktas and right back Christophe Jallet blazed over for Lyon.

Besiktas center back Matej Mitrovic then missed for the home side, and Lyon made no mistake with its second chance to go through when club captain Maxime Gonalons converted.

In an exciting game played at a relentless pace, Brazilian forward Talisca scored twice either side of striker Alexandre Lacazette's brilliant finish.

Last week's match was marred by widespread fighting among rival fans inside and outside the stadium, leading to both teams being given suspended one-season bans from European competition. There was no repeat of the trouble in Istanbul.

Lyon advanced to its third European semifinal, after reaching the last four of the Champions League in 2010 and the now-defunct European Cup Winners' Cup in 1964.

This was the third quarterfinal to go to extra time, with Ajax advancing following late goals by Nick Viergever and Amin Younes and reaching it first European semifinal since 1997.

Trailing 2-0 after the first leg, Schalke scored twice in four minutes early in the second half through Leon Goretzka and Guido Burgstaller to take the game to extra time.

Daniel Caligiuri's header in the 101st put Schalke — the 1997 champion when the competition was called the UEFA Cup — in front, but Ajax finished stronger.

Celta stayed on course to extend Spain's domination of this competition by advancing to a semifinal of a top European club competition for the first time.

Sisto completed a driving run with a stunning strike to put Celta 1-0 up on the night and leave Genk needing two goals to advance on away goals.

Leandro Trossard scored one of them in the 68th but Celta held on.

Sevilla and Atletico Madrid have won the Europa League or UEFA Cup seven times in the past 11 years.

VIGO, May 5: Marcus Rashford was decisive again, scoring from a free kick in the second half for Manchester United... Read More...

MANCHESTER, May 12: Manchester United and Ajax advanced to the Europa League final on Thursday, bringing together two of the... Read More...

Chances of rain with thunder today
22 minutes ago