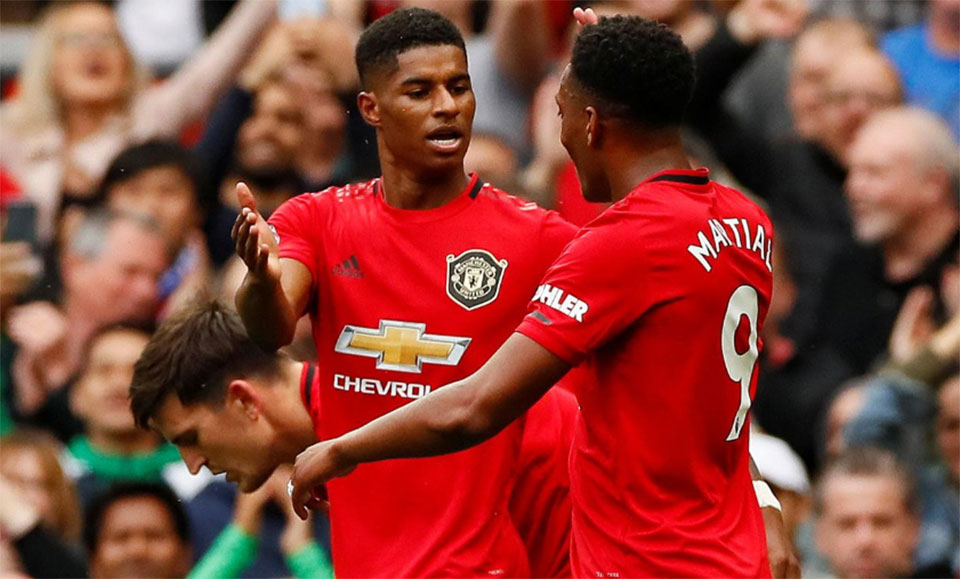 It was an awful start for the new Chelsea boss in his first competitive game on the bench for his old club who struck the woodwork twice in the first half but paid for their defensive frailties as Anthony Martial and Dan James also scored.

“Four mistakes for the goals. We have to be self-critical for that. We controlled the first half hour but made some poor decisions. We should be in the lead at the break,” said Lampard, who took over from Maurizio Sarri in the close season.

“They have pace and if you turn over the ball and allow them to run in behind you they can hurt you.

“We were comfortable in the first half. But there are lessons there. You can’t make mistakes at this level. But if you look at the game, it is not a 4-0 game,” added the former Chelsea and England midfielder.

It may indeed have been a harsh scoreline for the visitors but for Ole Gunnar Solskjaer’s United team with Harry Maguire, the world’s most expensive defender, and right back Aaron Wan-Bissaka making debuts, it was a dream start to the campaign.

The win was United’s biggest over Chelsea in a top-flight match since the same scoreline in March 1965 under Matt Busby.

Not only did Rashford strike twice but his attacking partner Martial also found the target after the break and the victory was rounded off by substitute James, a close-season signing from Swansea City, marking his United debut with the fourth.

GREAT START
“It is a great start for myself and the team. We rode our luck a bit first half but second we were much more ourselves,” said Maguire,” who joined United for 80 million pounds from Leicester City on Monday.

“It is the first game at Old Trafford so I think there were nerves. We gave the ball away in dangerous areas. We moved it nicely second half and our front three are so dangerous on the break,” added the centre-half.

But while the crowd celebrated their new-look side’s perfect start, it was evident until Martial made it 2-0 in the 65th that there is still much work to be done to get United anywhere near the level of title favourites Manchester City and Liverpool.

The 41-year-old Lampard handed starts to youngsters Mason Mount and Tammy Abraham, back at the west London club after loan spells in the Championship (second-tier), with American Christian Pulisic on the bench, and his side started brightly.

Abraham crashed an early drive against the United bar and Mount then tested David De Gea with an effort from distance.

With Pedro and Ross Barkley causing problems in the channels, Chelsea were moving the ball with confidence and United’s midfield were often chasing shadows.

But against the run of play the hosts got in front with an 18th minute Rashford penalty after the England forward was pulled down by Kurt Zouma.

Chelsea responded well, however, and went close to an equaliser when Emerson struck the post shortly before the break with a left-foot drive from a tight angle.

But the game turned decisively in United’s favour when, after a Rashford led counter-attack, Martial bundled in a low cross from Andreas Pereira.

Two minutes later, Chelsea’s defence was again exposed when Rashford timed his run to perfection, latched on to a long ball from Paul Pogba and beat keeper Kepa Arrizabalaga with a confident finish.

Another counter-attack led to United’s fourth goal when Pogba fed Welsh winger James who, after initially hesitating, fired into the far bottom corner via a deflection.

That was the icing on the cake for United and, while the team remains a work in progress, the mood around Old Trafford was back to its jubilant best.

WOLVERHAMPTON, Aug 20: Manchester United were held 1-1 at Wolverhampton Wanderers and missed out on taking top spot in the... Read More...