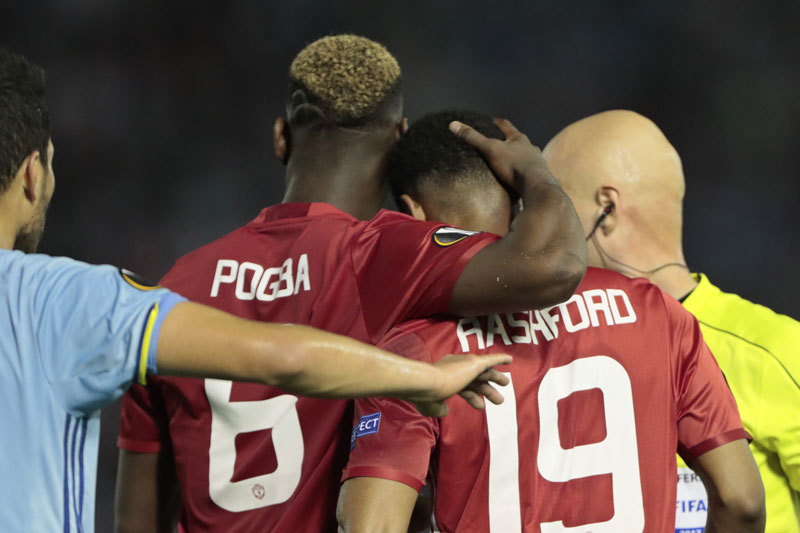 VIGO, May 5: Marcus Rashford was decisive again, scoring from a free kick in the second half for Manchester United to beat Celta Vigo 1-0 in the first leg of the Europa League semifinals on Thursday.

Rashford, who netted an extra-time winner against Anderlecht in the quarterfinals, drove a right-foot strike over the wall and into the far left corner in the 67th minute, securing United the advantage going into the second leg in Manchester next week.

"It's a positive result that leaves us with the advantage, but it's a small advantage," United coach Jose Mourinho said.

The Europa League is the only European club competition United has yet to win. It also gives United a good chance of returning to the Champions League, as it sits in fifth place in the Premier League.

Celta, playing in its first major European semifinal, lost for the first time in its last six European games.

"We are going to have to go there and score goals, as we did other times," Celta coach Eduardo Berizzo said. "We play in a similar way at home and away, we will try to be more effective than we were today."

Celta scored goals in all six away matches in the Europa League. It overcame a 1-0 loss at home in the round of 32 to Shakhtar Donetsk, and advanced by 2-0 win in the second leg. Celta also defeated Real Madrid away from home in the Copa del Rey, and eventually eliminated Madrid.

Rashford made the trip to Vigo by nearly 1,000 United fans worthwhile. Celta goalkeeper Sergio Alvarez took a couple of small steps the other way just before the teenage striker took his free kick, and wasn't able to come back in time to make the stop.

It was a mostly even match in front of nearly 30,000 fans at Balaidos Stadium, but United had most of the significant chances.

Alvarez had to make three great saves in the first half to keep United scoreless.

The first was a spectacular one-handed dive to stop a curling shot from Rashford from going into the top corner in the 20th. Alvarez then charged from his net in the 35th to make a leg save that prevented Henrikh Mkhitaryan from finding the net after entering the area free of markers, and four minutes later the goalie deflected a close-range shot by Jesse Lingard.

"We played well and controlled the game against a team that knows how to attack," United midfielder Ander Herrera said. "It's not easy to keep a clean sheet against Celta."

United goalie Sergio Romero also had to come up with a difficult save, tipping a Pione Sisto shot over the crossbar in the 59th.

Celta had one of its best chances early in the game, a close-range header by midfielder Daniel Wass that missed wide in the 11th. Forward Iago Aspas also came close with a header early in the second half.

"We will fight until the end in Old Trafford," Aspas said.

In the other semifinal, Ajax defeated Lyon 4-1 in Amsterdam in the first leg on Wednesday.

MANCHESTER, May 12: Manchester United and Ajax advanced to the Europa League final on Thursday, bringing together two of the... Read More...