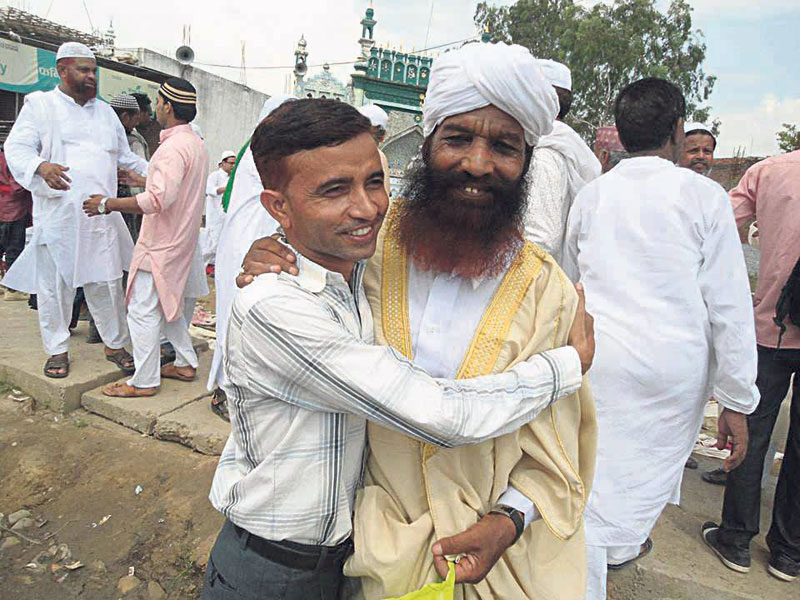 NEPALGUNJ, July 4: The true message of any religion, if its true spirit is followed, could only be humanity and harmony, say the Muslims of Nepalgunj. As the holy month of Ramadan is being observed, members of the Muslim community here are excited in spreading brotherhood.

Referring to the terrorist activities by Muslim outfits, including the recent killings of innocent people in Dhaka of Bangladesh, the Nepali Muslims here state that terrorists have no religion.

This is not the first time the beauty of religious harmony has been witnessed in Nepalgunj during Ramadan as this actually happens here every year.

"We believe in unity and brotherhood. We believe in kindness and love," said Mahomad Jahid Ansari, a local of BP Chowk in Nepalgunj. After observing fast for 25 days, during which they abstain from taking food from dawn till dusk, Ansari says he is not feeling any weaker. Instead, he seems to be rejuvenated. "Anything done from heart gives you inner strength. We observe fast in the holy month of Ramadan from our hearts," Ansari added.

During Ramadan, Muslims follow certain rituals and the atmosphere in the Muslim communities in Nepalgunj feels special. The market places are decorated and extra mobility of people is seen around. At Eklaini and Idgaha road, among other areas in the district, new food and sweet shops have popped up. "It always feels quite special during Ramadan. While in one hand it's about fasting, it's also about get-together and enjoying food lastly," Ansari said.

Muslims compulsorily observe fasting during Ramadan. However, children and ill people are exceptions, according to Ansari. "We take certain type of food called shehahari in the morning before sunrise and then take nothing throughout the day. The fast is over after sunset," he said.

Meanwhile, Muslim religious gurus said that Muslims have to observe strict fasting throughout the month of Ramadan. According to Sajad Ansari, Muslims have to take care of personal hygiene and read Namaz five times a day in the month of Ramadan. "Fasting during Ramadan is for the peace of heart and harmony and brotherhood in society. This is for brotherhood and happiness in society," he said, adding that harmony and humanity is the real spirit of Islam.

"We also have tradition of charity during Ramadan. We offer certain portion of food to the poor," Sajid said. He added that every Muslim has to donate two kg of wheat. "Those who cannot give that has to give Rs 60 per person," he explained, adding that the rich have to donate more to the poor.

Sajid stated that the every Muslim is expected to offer 2.5 percentage of his income to the poor and needy.

After the end of Roja, which goes on for 30 days, Muslim communities read Namaz in group. In Nepalgunj, they gather at BP Chowk for this purpose. They hug and greet each other. During this occasion of Id, they rejoice and consume special food item called sewai.

"During Ramadan we have to read Namaz routinely -- five times a day. And then from nine to 11 pm at night we read Tarabi Namaz 20 times a day," said Javed Ansari of BP Chowk. "All this discipline cleans our heart. And Ramadan is also about helping the poor," he said. "It is for peace, harmony and brotherhood," he added.

According to Javed, Muslims believe that those who follow the rules of Ramadan with pure heart are blessed by Allah. Differing to the views of Jahid Ansari, Javed says that fasting is compulsory even for children. "Everyone has to fast during Ramadan. But if anyone is ill, then they are excused. But they are liable to feed poor people for one month," he explained.

As per the 2011 census, there are around 95,000 Muslims in Banke district. And their festivals are well celebrated by Hindus too, Javed said. "Earlier the population of Muslims was probably less than now. Still, there is domination of Hindus. However, we both believe in harmony and brotherhood," he added.

Islam and Hindu religious gurus gather at BP Chowk during Id and exchange greetings. Similarly, during Dashain and Tihar, Muslims and their gurus participate in the festival no less fervently, according to Shukrarishi Chaulagain, former president of FNJ, Banke. "Religious harmony is very strong here. And it is even more visible these days. The people of the two religions do not seem to care whose festival they are celebrating, they just own each other's festivals," he added.

Shukrarishi Chaulagain of the Hindu community exchanging greetings with Muslims at BP Chowk during the occasion of Ramadan.