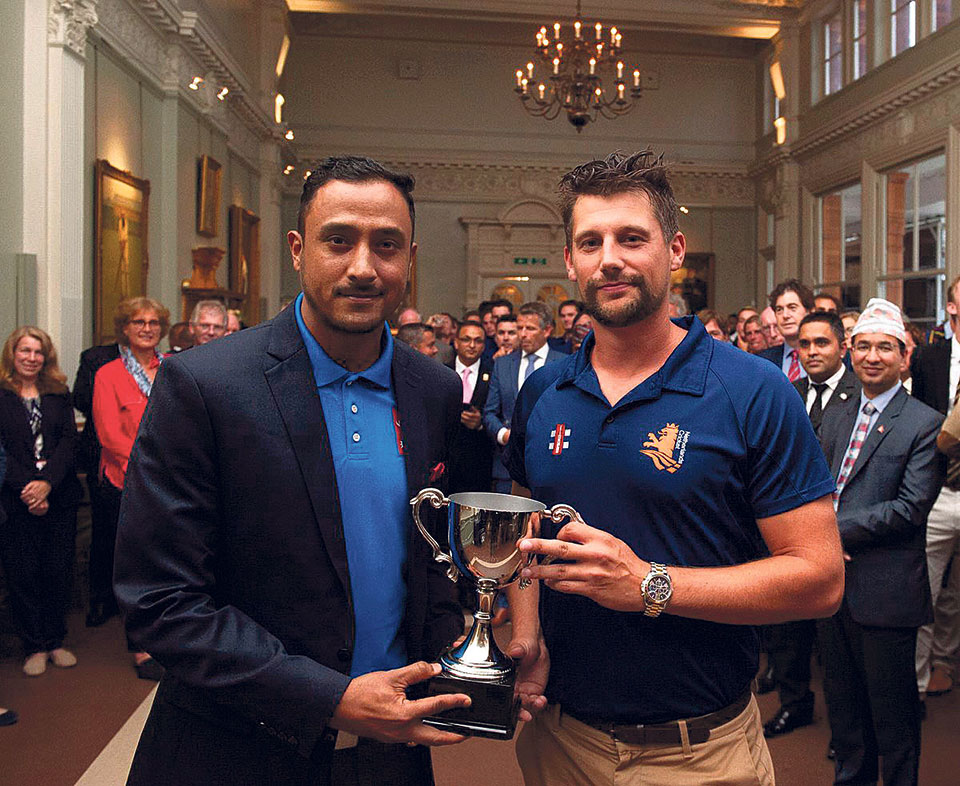 Nepal’s skipper Paras Khadka (left) and the Netherlands captain Pieter Seelaar pose with the T20 triangular series trophy after their final tri-series match at the Lord’s Cricket Ground in London, England on Sunday. Both Nepal and the Netherlands were declared joint winner of the tri-series after the match was abandoned due to rain. | Photo Courtesy: Lord’s Cricket Ground/Twitter

KATHMANDU, July 31: The virtual finale between Nepal and the Netherlands ended with a no-result after 16.4 overs as rain kept intermitting Nepal’s first T20 International match in three years at the Lord’s Cricket Ground in London on Sunday.

Rain played the spoilsport whole day as Marylebone Cricket Club (MCC), Nepal, and the Netherlands were scheduled to play one-off T20 matches against each other. However, the first two matches against the MCC were played with a drastically reduced 6-over per side match. This was Netherlands’ first T20I at the Lord’s since the 2009 World T20 when it had defeated England. Similarly, Nepal had made its Lord’s debut against the MCC two years ago.

The Netherlands was asked to bat first by Nepal in the final match of the day. Wesley Barresi powered his way through 44 off 24 balls after entering at number three. His innings included six fours and a six driven off medium pacer Sompal Kami. Barresi added 54 for the third wicket with Ryan ten Doeschate who was playing his first T20I in more than eight years and scored 38 off 27 balls. Rain at 12 overs mark as the Dutch team resumed at 112 for 3 with two overs shaved off the match.

Michael Rippon continued from where ten Doeschate left, after a pin-point direct throw from Dipendra Singh Airee, taking his innings to 38 not out off 22 balls. However, the devastating boost came from Shane Edwards with an unbeaten 34 off 14 that included three fours and back-to-back sixes off leg-spin sensation Sandeep Lamichhane in the 16th over. He was the most expensive bowler of the day along with Sompal Kami, finishing with 0 for 43 in three overs. However, Kami picked a wicket in his four-over-spell.

The drizzle was persistent after the second halt. It got heavier as the umpires took everyone off with the Netherlands’ innings declared finished at 174 for 4. The officials had to call off the play way before the official cutoff time due to the rain forecast for the rest of the evening. The match was abandoned with both teams settling for a no-result before the ODI series in Amsterdam.

Earlier, Nepal overcame MCC by nine wickets in its first, and second of the day, match at the Lord’s Cricket Ground on Sunday. Nepal’s Subhash Khakurel’s 16 runs and Kami’s two wickets were the highlights of the match.

Nepal, winning the toss and electing to field first, was presented a target of 41 runs for the loss of four wickets by the MCC in a reduced match of six overs after the rain delay. In reply, Nepal chased the target for the loss of one wicket in 4.4 overs.

Sri Lankan great Mahela Jayawardene who was leading the side scored not out 24 runs off 16 balls that included four boundaries, while all the other MCC batsmen failed to reach double figures in the shortened match.

Kami took two wickets giving away eight runs in the two overs he bowled, while he was supported by veteran Shakti Gauchan who took a wicket giving away six runs in one over.

In reply, Khakurel and Gyanendra Malla took the charge in the chase completing the game with eight balls remaining. Khakurel hit 16 runs off 15 deliveries including two fours, while Malla scored 12 runs off four balls with a four and a six. Likewise, Anil Kumar Sah added nine runs off nine balls comprising of two boundaries. Daniel Douthwate was the only wicket taker for MCC as he gave away seven runs in one over for a wicket.

Likewise, in the first 6-over-per-side match played on the same day, the Netherlands defeated MCC by 10 runs. The Netherlands’ opener Tobias Visee hit not out 58 runs off 23 runs including five sixes and four fours was announced man of the match.

KATHMANDU, July 13: Four persons were killed in the Kathmandu Valley as houses collapsed on Friday due to continuous rain... Read More...