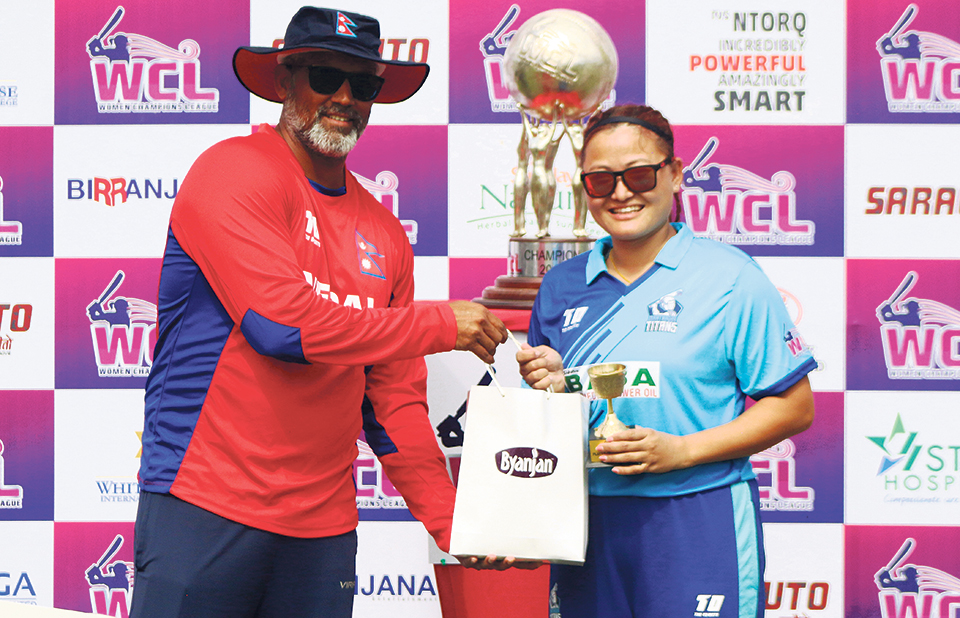 Rai was complimented by Sonu Khadka’s wicket and two run-outs as Paltan was limited to 94 runs for the loss of five wickets in 20 overs. Paltan had won the toss and elected to bat in the morning match of the day three.

Kabita Kunwar remained unbeaten on 22 runs off 23 deliveries which included two boundaries whereas skipper Sita Rana Magar’s 16 runs off 29 deliveries were the only notable contributions from the Paltan batters.

Anjali Chand and Rewati Dhami chipped in with 15 and 12 runs respectively as none of the other batswomen was able to convert them into a substantial innings.

Later, Titans completed the chase of 95 runs in 15 overs for the loss of four wickets. The half-centurion Jyoti Pandey continued her good form scoring 22 runs off 16 deliveries which included four boundaries.

Similarly, Laxmi Chaudhary contributed patient 23 runs off 37 deliveries in the middle overs to steer the chase.

Skipper Sita Rana Magar registered two wickets whereas Anuradha Chaudhary chipped in with a wicket for Pokhara Paltan losing its second game on the trot.

Winless Paltan are set to face unbeaten Chitwan Rhinos in first match on Saturday whereas Titans will face Kat Queens Kathmandu during the second game on same day.

Kanoujiya picked up two wickets as Falcons were bundled out for 46 runs in 17.1 overs. She also scored unbeaten 58 runs, the third half-century of the league, off 55 deliveries which included eight boundaries to help Rhinos put up a total of 135 runs for the loss of three wickets.

Likewise, Rekha Rawal and Suman Khatiwada shared a wicket each.

In a forgettable day for Falcons batswomen, Captain Nery Thapa scored 17 runs off 20 deliveries which included a four and a six.

None of the other batswomen was able to cross seven run mark scored by Shanti Chaudhary who remained unbeaten. Falcons are winless in two games.

Earlier, Falcons won the toss and invited Rhinos to bat first in the second game of the third day in WCL. Rhinos played cautiously losing only three wickets throughout the innings.

Except, Kanchan Shrestha’s 11-ball duck, Rhinos batswomen complemented Kanoujiya to put up a winning total of 134.

Unbeaten Rhinos are second on the points table with four points after two matches. Rhinos will face PokharaPaltan in first match on Saturday. 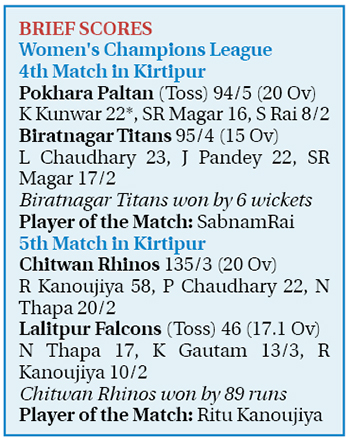 KATHMANDU, Oct 17: Player of the match SantoshiChaudhari registered a three-wicket-haul to propel Chitwan Rhinos to a five-wicket win against... Read More...