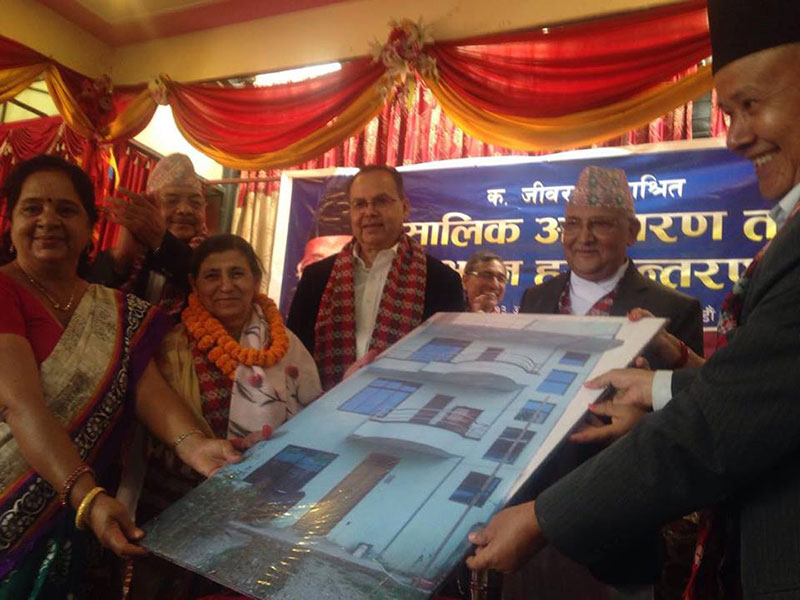 TEHRATHUM, Nov 9: Radhika Pokhrel, a woman from Solma village of the district, who went to Australia years ago has not only not forgotten her roots back home but also helped many organisations as well as needy individuals, becoming a good Samaritan.

Pokhrel who is currently working in Australia has already invested more than Rs 15 million back in her birth place Solma in social service. Having interest in music and social service from her childhood, she has spent the money that she has earned in Australia.

Pokhrel has not only helped the poor and people in trouble, she has built a new house for Maya Gyanwali, the widow of Late CPN-UML leader Jibraj Ashrit who was killed in a road accident along with Madan Bhandari. When Pokhrel heard that the construction of Ashrit Memorial house was stuck, she provided Rs 2.7 million to complete it. She has also constructed the Pataleshwor Mahadev temple near Jirikhimti Bajjaar, investing Rs 1.03 million.

After she realized that the villagers were facing difficulty to perform the final rites of the dead, she constructed a mourners’ house worth half a million rupees on the banks of the local Piguwa River. Realizing the fact that the information sector has a vital role to play in the society, Pokhrel provided Rs 200,000 to Radio Menchhyayem for establishing a communication house. Likewise, she has established a fund of Rs 111,111 under the ownership of FNJ Tehrathum for capacity enhancement of journalists in the district.

Pokhrel, who has already earned the image of a social worker, has established different funds of more than Rs 200,000 at Kalika and Ratna Higher Secondary Schools to support the education of students. She has also been supporting various religious programs. She provided Rs 300,000 to a Saptah Puran organized in Surke, Jirikhimti. Her social works are not limited to just her home district, Tehrathum. She has recently provided Rs 150,000 to an old age home in Jhapa district. She also provided the assistance of Rs 100,000 to the fire victims of Myanglung.

With the thought that Red Cross has a vital role to play during any kind of emergency, she donated Rs 100,000 for the construction of a Red Cross building in Jirikhimti Bazaar. Her social service has no limitation. She has also supported the promotion of sports in the district. She provided Rs 110,000 each to the organizers of the CDO Cup and Akhil Cup, both football tournaments.

Pokhrel has provided Rs 50,000 to the program Tehrathum Idol, a musical reality show. Likewise, she has provided Rs 75,000 to Padam Kumari Gurung, who was unable to have treatment of her eyes in the lack of money. Gurung's sight is back with Pokhrel’s assistance. In addition to this, she has assisted Suresh Khatri, Narasingh Limbu, Nagendra Gorsane, Sabitri Sangraula, Dhan Bahadur Budhathoki and Pemba Sherpa of various parts of the district for their treatment. She has spent a total of Rs 200,000 for their treatment. She gave Jhupta Bahadur Rokka Rs 27,000 and helped him free his land kept as collateral for a loan received from a rich person in the village.

Likewise, she has helped Pentagon College with Rs 50,000. She also helped to build a temple in Sindhupalchok with a donation of Rs 300,000. She provided Rs 100,000 each to Myanglung and Jirikhimti College for the construction of physical infrastructure.

Pokhrel has established 'Radhika Trust' for further social service. The trust has already acquired a piece of 5 ropanis of land worth Rs 6.5 million to construct an orphanage near Myanglung Bazzar. According to Pokhrel, the orphanage will soon be built and those who have lost their parents will be provided good care there.