Race to refine: the bid to clean up Africa’s gold rush 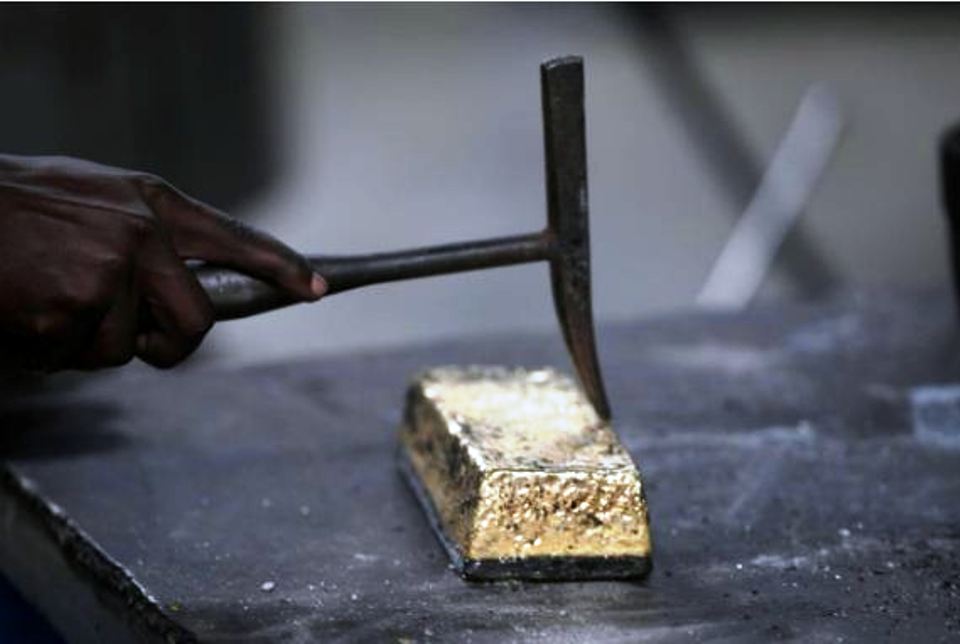 ENTEBBE, Jan 15:  In a refinery just outside Uganda’s main airport, workers slip bars of freshly refined gold into clear plastic bags sealed with a sticker of the national flag - black, yellow and red - and the label “Ugandan’s Treasure.”

Uganda produces little gold of its own. Alain Goetz, who set up the refinery, says that by branding gold from abroad as Ugandan, the operation is merely imitating others - for example, the Swiss don’t mine the gold they refine in Switzerland.

A pink building guarded by dogs at Entebbe on the shores of Lake Victoria, the refinery, African Gold Refinery (AGR), is part of a trend across Africa. Small-scale mining is booming, and new gold refineries are opening by the dozen, to process metal produced by informal diggers in Africa and beyond.

The refineries, which often win high-level political backing, can be positive because they offer miners and states a way to extract value from their own mineral wealth rather than just exporting raw commodities. But if not properly controlled, they risk adding to problems of smuggling and funding conflict.

Some of Africa’s new gold refineries are in South Africa, a major gold producer with an already large refining industry. There, authorities granted 19 refining licenses in the year to March 2019 - as many as in the previous three years combined.

Elsewhere in sub-Saharan Africa - where until 2012 there were only a handful of refineries - as many as 26 are now either operating or under construction across 14 countries from Mali to Tanzania, including in states which mine little gold at home, a Reuters survey of public reports found. Officials in at least three more countries including Madagascar and Ivory Coast have publicly said they are interested in hosting a refinery.

Governments of gold-producing countries in Africa have long complained that the precious metal in their rocks is being illegally produced and smuggled out on a vast scale, sometimes by criminal operations, often at a high human and environmental cost.

By refining gold - in some cases obliging producers and traders to sell their gold to home-grown refineries - states hope to capture value that is being lost. Some new refineries have invested in systems to ensure they process gold from legal and environmentally responsible miners.

“The only way to stop (smuggling) is having multiple refineries in Africa,” said Frank Mugyenyi, head of the minerals unit at the African Union.

With so many refineries competing for gold to process, each has scant incentive to check where its gold comes from.

Just 13 of them – those for which Reuters was able to obtain data – state they can handle more than 1,400 tonnes of gold a year, worth around $70 billion. That means they could treat around twice Africa’s estimated total gold production, and nearly a third of the world’s supply.

Of 22 refineries surveyed by Reuters, 14 did not respond to requests for more information about the size and nature of their business.

Two responses to the survey showed a lax approach: One small operator, Bupe Chipando who heads Alinani Precious Metals Ltd in Kenya, said he does not yet purify gold, but just melts blocks of impure metal together and ships them overseas. Officials said they knew of at least two other African refiners who did the same thing.

Another, Robert Baker, the CEO of Bekora Miners in Cameroon, said most of the gold his refinery processed was not declared to customs, in order to avoid paying tax on metal it exports. Cameroon’s government did not respond to requests for comment.

The Organisation for Economic Co-operation and Development (OECD) has developed global sourcing standards against which it recommends refineries are audited. Outside South Africa, no African refineries have yet followed that recommendation, said Louis Marechal, an OECD expert on responsible business conduct at who has traveled widely in Africa consulting with governments and companies on how to regulate and source gold responsibly.

OUT OF THE SHADOWS

The new refineries offer an important outlet for millions of individuals who dig for gold using basic technology.

Industrial mining companies usually fly metal they produce in Africa to large refineries accredited by the London Bullion Market Association (LBMA), the industry’s standard setter. All but one of these are outside the continent. Concerned about the risks of rights abuses, crime or conflict in the supply chain, LBMA-accredited refineries typically steer clear of metal from informal miners.

Some people in the industry concede that it is hard for Africa’s new refiners to be accepted as mainstream suppliers. Large banks, jewelers and electronics makers generally only accept gold from refineries accredited by groups such as the LBMA. LBMA rules require a refinery to operate for at least five years and process large amounts of gold before it can be accredited.

Neil Harby, chief technical officer at the LBMA, said several refineries in countries including Ghana are partnering with LBMA-accredited refineries, which support their efforts to control sources and offer an outlet to the global market by re-refining the gold they produce.

This helps to improve miners’ livelihoods by lifting them out of the shadow market, he said. But it is time-consuming and expensive, and requires close regulation, such as a requirement that gold is exported via a refinery.

In Uganda, AGR has already established itself as a major player. It said it exported more than 17 tonnes of gold worth around $800 million in 2019; it is listed in the supply chains of more than 200 U.S. companies’ regulatory filings for 2018.

It is surrounded by a manicured lawn and palm trees. Inside, men in fireproof masks and aprons process metal through mills, furnaces and cooling drums.

Founder Goetz, a Belgian whose family has traded gold for two decades in Africa’s Great Lakes Region, said he set up the refinery in response to informal approaches by unidentified government officials in the region in 2014. They saw “a need to make the supply chain more professional, more transparent by setting up a refinery,” he said.

In a landscape where new refiners compete for metal to treat, AGR has taken risks with the sourcing of its metal. Last year, it processed gold from Venezuela, where the state-run gold industry has been sanctioned by the United States since 2018 to try to prevent the government from using it to earn hard currency.

Ugandan authorities said in March they were investigating AGR’s Venezuelan gold imports worth $300 million on grounds it may have been smuggled.

The Attorney General dismissed those allegations but the same month, U.S. Assistant Treasury Secretary Marshall Billingslea traveled to Uganda to ask authorities about the fact AGR accepted gold from Venezuela, a U.S. official said. Investigators have returned twice since, the official added.

AGR says all the Venezuelan gold it refined was declared to the relevant Ugandan authorities, who declined to comment further.

Uganda has long been a conduit for gold worth billions of dollars mined in neighboring Democratic Republic of Congo. The trade fueled regional wars, funded rebel fighters and led to United Nations sanctions on traders involved, to try to staunch the flow.

Uganda’s official gold exports grew to $116 million in 2006/7, according to central bank data. Then sanctions were imposed and official exports collapsed, averaging under $17 million a year until 2014/15, the data show.

Once Uganda’s refineries started up, the country’s official exports rose again. Since AGR launched in 2016, they have jumped to $1.1 billion for 2018/19 - nearly triple the country’s earnings from coffee.

Congo’s own official exports of informally mined gold remained negligible, which Congolese officials say shows much of its metal is being smuggled out.

AGR was one of four refineries to which Uganda’s tax authority wrote in September. The letter, seen by Reuters, complained of “rampant cases of fraud in the gold trade business including forgery and misrepresentation of customs documents, stamps and signatures.” It did not specify details, and the tax authority declined to elaborate.

AGR says its raw gold comes mainly from the region, but is not smuggled. “We have turned down a considerable number of individuals and companies who did not have the relevant documentations and whose source of gold is from (places) considered as high risks or sanctions areas,” an AGR spokesperson said.

Goetz said he recently stepped down as CEO of the refinery to spend time on charitable work, sold his shares to an unidentified investor from the Gulf, and now acts as a consultant to the refinery. Asked who ultimately owns AGR, neither Goetz nor the refinery’s spokesperson would comment.

“RACE TO THE BOTTOM”

Africa’s new refiners operate amid networks of buyers who are willing to pay extra for gold. These include smugglers taking advantage of tax differentials between African states, or looking to slip gold out of the continent.

Smugglers typically sell gold abroad for hard currency such as dollars, which they can use to purchase goods including cars, electronics or local currency that are in high demand in Africa. These they sell.

By not paying tax and avoiding the banking system, they can pay above market price for the gold and pocket the profit they make on the resale of the goods.

One refinery in Mali says it is struggling to compete with smugglers. Kankou Moussa Refinery has been in operation since 2015 and says it plans to invest more than 400 million euros ($445 million) to create a network of centers which will buy gold and educate miners on how to work safely.

But smugglers and money-launderers pay up to three percent above market price for gold, said Dario Littera, its president.

“They are losing ... on the gold, but they are paid in hard currency that they take back and buy local currency for a profit,” he said.

With high profits from smuggling and weak oversight pushing vast quantities of gold into the informal economy, there is little incentive for the new refineries to play by the rules, said the OECD’s Marechal.

He said he had seen at least one case when individuals implicated in large scale gold-smuggling in one West African country set up a refinery in another.

Without better and more consistent regulation, he said, competition between the new refineries may degenerate into a “race to the bottom.

Gold worth billions smuggled out of Africa

LONDON, April 24: Billions of dollars’ worth of gold is being smuggled out of Africa every year through the United... Read More...

KATHMANDU, July 15: Nepali rupee gained 78 paisa against US dollar this week as the Indian currency, with which rupee... Read More...