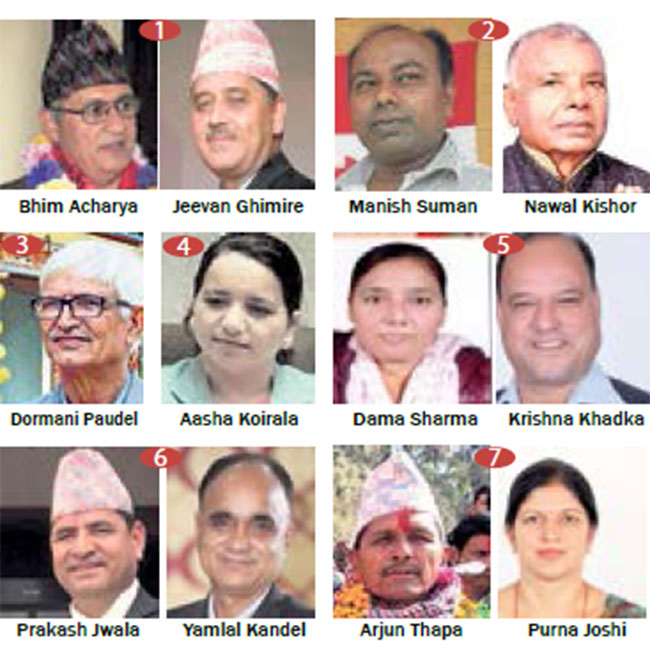 According to Article 182 of the constitution, the election of speaker and deputy speaker must be held within 15 days of the first meeting of the provincial assembly. Province 3 has already fixed the speaker’s election for February 10. All provinces will hold deputy speaker’s election after electing the speaker, as the constitution has mandatory provision of electing speaker and deputy speaker from different political parties and different genders. Provinces 2, 5, 6 and 7 are holding the first meeting of their provincial assemblies on Sunday and provinces 1 and 4 are scheduled to hold the meeting on Monday.

The left alliance, which has swept provincial assembly elections in six of the seven provinces, has forged an agreement to allocate the post of speaker to the CPN-UML in provinces 1, 3, 6 and 7 and to the Maoist Center in provinces 4 and 5.

Both parties have expedited internal homework to pick their candidates for speakers but have not finalized the candidates in any province so far. Aspirants for the posts have expedited lobbying with the leaderships of their parties and provincial assembly members in their favor. The second largest political force in Province 2, Rastriya Janata Party Nepal (RJPN) is likely to get the post of speaker, if their ongoing power-sharing negotiation with the largest force in the province Federal Socialist Forum Nepal (FSFN) reaches a positive conclusion.

According to CPN-UML leaders, most of the candidates for the post of speaker will be finalized after February 7, after the return of the party’s senior leader Madhav Nepal from his foreign trip. UML has decided to finalize the candidates of speakers and deputy speakers from the standing committee meeting of the party.

Party leaders claimed the speaker would be chosen from among Acharya and Ghimire.

The two largest political forces in Province 2-- FSFN and RJPN-- have a majority in the province. The two parties have been holding talks regarding sharing the posts of chief minister (to FSFN) and speaker (to RJPN) among them, according to the leaders. If RJPN gets the speaker’s post, the party is likely to pick among party senior vice president Nawal Kishor Sah and party spokesperson Manish Kumar Suman as the candidate for the post. “We will finalize the candidate within a week after concluding the power sharing deal with FSFN,” said RJPN leader Keshav Jha.

The post of speaker of Province 4 has been given to the Maoists according to the power-sharing deal between the two left parties. Though many leaders have been eying the speaker’s post, the party is likely to pick former Women Children and Social Welfare Minister Aasha Koirala as the speaker’s candidate in the province, according to party insiders.

From the left alliance, the Maoists will field the candidate for the post of speaker in Province 5 as well. Party interlocutors say either Dama Sharma or Krishna Dhwaj Khadka is the likely candidate for the post of speaker in the province. Though, Purna Gharti and Dadhiram Neupane are also in the fray to become the speaker, their chance is slim, said the party leaders. Dama Sharma is a former Constituent Assembly member and represents Dang while Khadka is the husband of former General Administration Minister Rekha Sharma and represents Pyuthan district.

UML convened a meeting of the party’s province committee to recommend the speaker’s candidate in Province 6 on Monday. Party leaders said either Prakash Jwala or Yamlal Kandel is likely to become the speaker of the province. However, Jwala told Republica on Saturday over telephone that he is not interested to become the speaker. Both Jwala and Kandel have the experience of working in the central parliament.

Similarly, Purna Joshi and Arjun Thapa are in the fray to become speaker in Province 7 from the UML. Lecturer-turned-politician Joshi represents Doti while veteran politician Thapa represents Bajhang district.

KATHMANDU, Feb 3: With all seven provinces likely to fix the date for the election of the speakers of their provincial... Read More...

JANAKPURDHAM, Jan 21: The oath taking ceremony of the members of the provincial assembly of province no. 2 concluded here... Read More...

New faces cement their place in provincial assembly of Sindhupalchowk