Quantity of active ingredients in pesticide on the rise 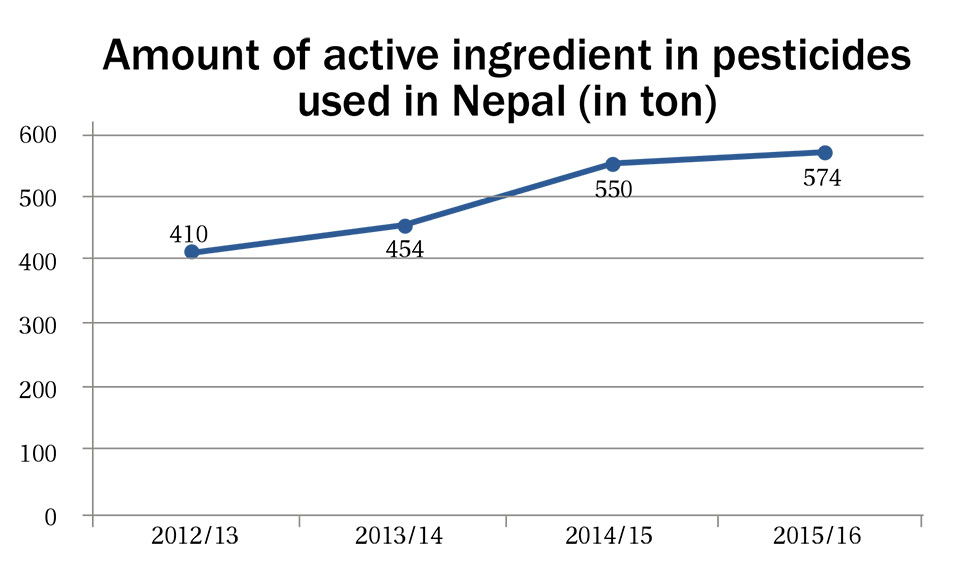 KATHMANDU, Dec 3: The quantity of active ingredients in pesticides used in the country has been increasing for the last few fiscal years, according to a report by Plant Protection Directorate (PPD).

A certain volume of pesticide is prepared by mixing water and the pest killing chemicals. Active ingredient is the total amount of the pest killing chemicals in the pesticide. A high level of these ingredients in pesticides is harmful for human health, crops, livestock, and the entire environment.
Farmers Republica talked to said that pests become immune to the pesticides used in their crops, which compels them to use stronger pesticides in higher quantities.

"We have to use pesticides time and again to keep pests away from our crops. It seems they have gained strength against the pesticide," said Arjun Parajuli, a tomato farmer of Mandan Deupur Municipality in Kavre.

Officials of PPD conceded the fact that the use of pesticides by Nepali farmers has seen an increase in recent years. According to PPD, fear of pests and insects damaging the crops has been the main factor prompting farmers to use high amount of pesticides.

"Pests are often problems for crops, and they sometimes cause a huge damage to farmers. Farmers in Nepal use high amount of pesticides in the fear of getting their crops damaged," Bed Prasad Chaulagain, pesticide registrar at PPD, told Republica.

"The use of pesticides has been increasing globally, not only in Nepal," said Chaulagain. "We have banned a number of pesticides which have been proven to harm human health, but cannot ban the use of all pesticides."

"As part of a campaign on controlling pesticides, we are organizing a campaign 'No Pesticide Use Week' from December 17 this year," added Chaulagain. "We have installed billboards with messages about harmful effects of pesticides."

PPD organizes 'No Pesticide Use Week' every year in December in association with other agencies, but such programs seem to be of no use since the use of pesticides in the country does not seem to come under control.

Moreover, trend shows that such programs are focused only in city areas like Kathmandu, which hardly reach farmers outside the cities.

Excessive use of pesticides leave residue in the plants, which when consumed, becomes harmful for human health.

No pesticide residue testing at most vegetable markets in Valley

Other major vegetable markets of the Valley including the ones at Balkhu, Baneshwar, Koteswar, Balaju, and Chabahil, let alone the... Read More...

MELAMCHI, July 14: Police have seized over a kg of gold and four kgs of silver from Melamchi municipality-8, Bahunepati... Read More...