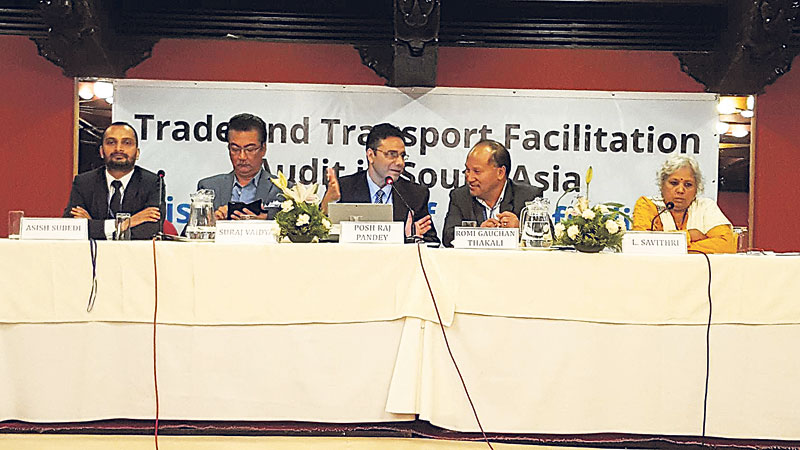 KATHMANDU, Sept 30: Quality and efficiency of roads and airport have been identified as the priority areas for trade facilitation in Nepal, according to Trade and Transport Facilitation Audit Report.

The report entitled ‘Trade and Transport Facilitation Audit in South Asia’ states that single window, electronic and online submission of customs documents, publication of trade related rules and regulations, quality of warehouse and trans-loading facilities and transit agreements with neighboring countries are some of the key priorities for trade facilitation.

The survey also revealed that there is significant variance in the responses regarding number of documents required to export, ranging from one to 25 in some cases, depending on the product, according to Puspa Sharma, Research Director (on Leave) at South Asia Watch on Trade, Economics and Environment (SAWTEE).

He said that they, during the survey, also found that there was unawareness regarding the number of signatures required, inconsistent responses from those who were aware, and a considerable spread in numbers (one to 58). “There was notable discrepancy among respondents from various border points regarding import document and number of signatures,” he added.

Likewise, another major concern of the exporters/importers was regarding valuation of customs duties. “Although the primary basis for customs valuation is transaction value, the customs often adopts the reference value method unless the transaction value is greater than the reference value,” the findings revealed, adding, “An overwhelming majority mentioned that Nepal does not implement authorized traders scheme.”

The report also noted that there exists a system of post clearance audit. However, it was only limited to controls at the border with no audits conducted at traders’ premises.

On top of that, the report flagged corruption as a significant problem, though the respondents refrained from reporting due to the fear of possible repercussions, as was mentioned by many of them.

The report was produced in line with Nepal’s commitment to global trade regime.

In December 2013, WTO members concluded negotiations on a Trade Facilitation

Agreement at the Bali Ministerial Conference. As a Member of WTO, Nepal was obligated to ratify the document, according to Posh Raj Pandey, chairman of SAWTEE. He further added that this research has contributed in identifying bottlenecks in trade and transport in the South Asian region and estimating the required investment for adopting considerable trade facilitation measures.

The South Asian countries presented their country-audit report in the two-day ‘Trade and Transport Facilitation Audit in South Asia’ that started on Thursday.

About 35 participants from the government, private sector, academics and various other stakeholders from Bhutan, Bangladesh, India, the Maldives, Nepal, Pakistan and Sri Lanka were engaged in the two-days brainstorming session on Thursday and Friday.

Earlier on Thursday, Minister for Commerce Romi Gauchan Thakali had said that the government would soon ratify the WTO Trade Facilitation Agreement.

The intra-regional trade in much less at around 5 percent, whereas the out-of the region trade is much higher due to poor connectivity and non-tariff barriers.

The informal trade in the region is higher than that of the recorded 5 percent intra-regional trade, said L Savithri, Director for Trade, Finance and Economics at the SAARC Secretariat. She was of the view that business should be put ahead of politics and that the business community in SAARC countries can push for greater regional cooperation in South Asia.

“The private sector of the region is ready to move ahead in a united manner to increase intra-regional trade, which can eliminate poverty in the region,” said Suraj Vaidya, the President of SAARC Chamber of Commerce and Industry. He also said that the commitments made by South Asian governments look promising but it is the private sector that has been trying to move ahead. “However, the government responses are not very encouraging and it has further hampered by issues that come up from time to time like the recent postponement of the 19th SAARC Summit to be held in Islamabad,” he added.

He invited the private sector to meet in Islamabad on pre-scheduled date i.e. November 4-5 despite uncertainties surrounding the SAARC Summit to be held in the Pakistani capital city on November 9-10.

BHOJPUR, April 21: Transportation has been affected in the district with many rural roads damaged by off-season rains that started... Read More...