Forced to spend big to get quake grant 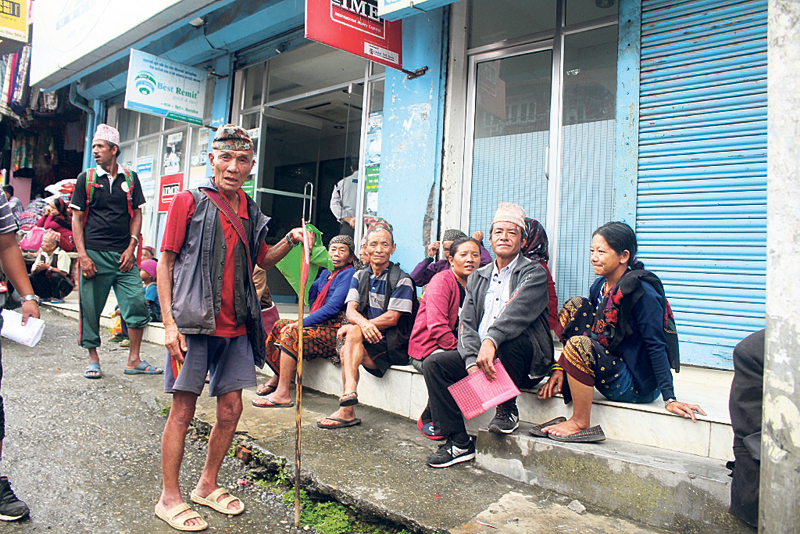 GORKHA, July 21: It has already been three days since Suk Bahadur Ghale, an earthquake victim from Barpak-3 in Gorkha district, has been staying in a guest house at the district headquarters with hopes of receiving the first installment of grant from the government. He was seen standing in a queue in front of Manaslu Development Bank along with other quake victims to receive Rs 50,000.

By the time the bank finally provided him the check in the evening, his total expenses was already around Rs 10,000, including the cost of transportation and three days' fooding and lodging.

“I had borrowed Rs 8,000 from villagers. That money has already been spent. I have no choice but to spend the grant amount to pay the debt,” said Gale, who plans to return home the next day.

“The government has promised to provide the full grant amount in three installments. As our expenses just to receive the first installment reached Rs 10,000. We would be forced to spend about 30,000 altogether just to receive the quake grants,” said Gokarna Ghale, another victim. “Authorities should make some provisions for locals of rural areas. They should provide us with separate travel expenses,” he added.

Victims have requested the government to make such provision that the banks would reach out to the victims to distribute the relief, instead of the other way around.

Stating that the relief would not be sufficient to build their house, Barpak locals also requested the government to make arrangement for additional grants as well as to provide subsidy for transportation of building materials.

“The relief amount of Rs 50,000 would enough just for clearing the debris of our quake-ravaged house. How would we rebuild our house?” Gokarna further added.

Guna Raj Bhattarai, information officer at the sub-regional office of the National Reconstruction Authority (NRA), said there is no provision for banks to reach out to the victims and distribute the relief, due to which victims have no choice but to spend lots of money to receive the grant.

According to the NRA, the government has already deposited the first installment of reconstruction grant for 90 percent of the victims in the district.

The devastating earthquake with its epicenter in Barpak had destroyed about 58,000 houses in the epicenter district.

The Failed Dalit Struggle
5 hours ago

Three killed as landslide damages a house
6 hours ago