Liu Liu, chief of the Chinese Communist Party’s Publicity Department (fourth from left), poses for a group photo in front of the Nyatapola Temple in Bhaktapur Durbar Square premises on Monday.

KATHMANDU, Dec 20: Liu Qibao, chief of the Chinese Communist Party's Publicity Department keenly observed monuments that were damaged by last year earthquakes in the Bhaktapur Durbar Square on Monday morning. But the Nyatapola Temple that still stands tall, surrounded by rubbles of monuments, surprised him.

He was amazed to see the 105 feet tall 5-storey pagoda temple standing intact despite the devastating quakes. He then immediately reached to Chief of Bhaktapur Tourism Information Center Damodar Suwal, who was guiding him through the durbar square, and started asking him through his translator about specialties of the temple.

Suwal informed Qibao about the historical, religious and cultural importance of the 300-year-old temple which houses Goddess Siddhilaxmi and also that temple was able to survive the quakes due to renovation, done by the Bhaktapur Municipality two decades earlier.

Suwal's team had welcomed Qibao at the main entrance of the durbar square by offering him Bhaktapur's iconic Bhadgaule topi (cap). A cultural troupe performed Lakhe dance, another cultural practice the community is famous for, on the occasion. During the tour he expressed interests in efforts made towards restoring the heritage structures, including the severely damaged building of Bhaktapur National Art Museum.

“While inquiring about the need for supporting the museum building with wooden beams, he expressed hope that the Nepalis will be able to restore the damaged heritages to their former glory very soon,” Suwal informed.

Qibao was in particular fascinated with the depiction of dragon like figures sculpted on the golden gate, next to the museum building. “He was interested in knowing the story of the entities engraved on the pillars and arch of the golden gate. This helped us in discussing the influence of Chinese art and culture in Nepal while explaining him what they were,” he added.

During the visit, Suwal said that Qibao suggested for reconstructing the collapsed monuments without distorting their originality and archaeological significance. 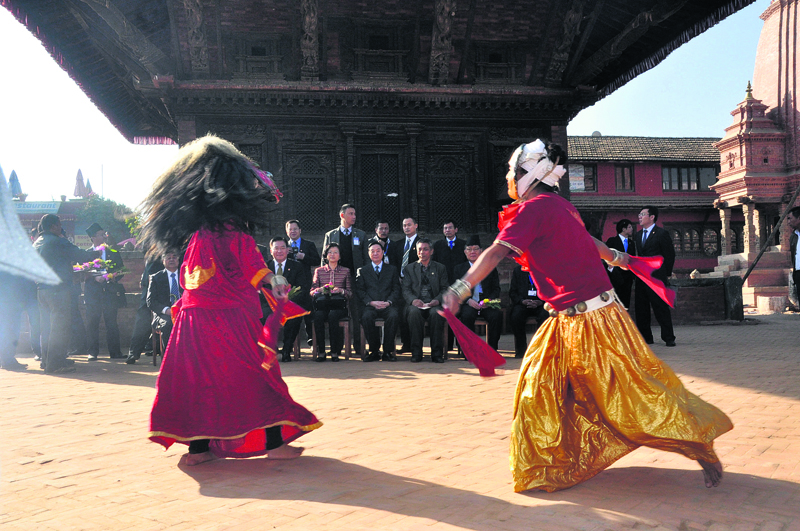