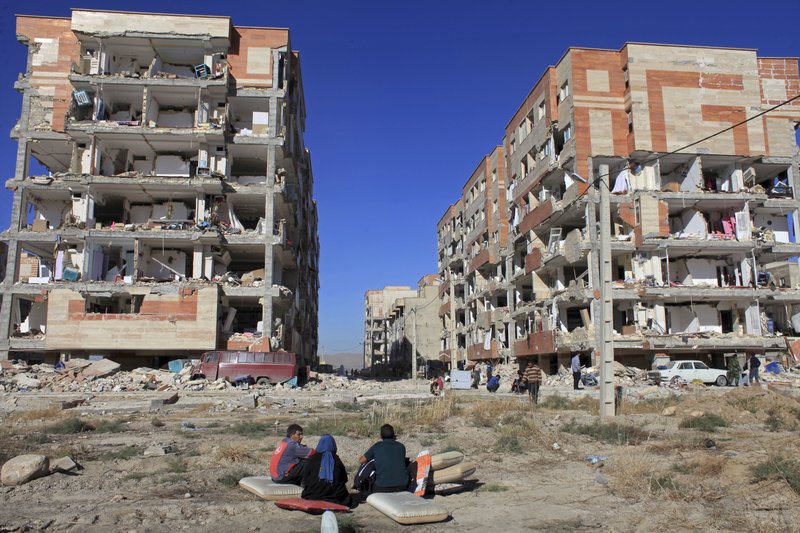 TEHRAN, IRAN, Nov 14: Rescuers dug with their bare hands Monday through the debris of buildings felled by an earthquake that killed more than 430 people in the border region of Iran and Iraq, with nearly all the casualties occurring in an area rebuilt after their ruinous 1980s war.

The magnitude-7.3 earthquake struck Sunday at 9:48 p.m. Iran time, just as people were going to bed. The worst damage appeared to be in the Kurdish town of Sarpol-e-Zahab in the western Iranian province of Kermanshah, which sits in the Zagros Mountains that divide the two countries.

Residents fled without time to grab their possessions as apartment complexes collapsed into rubble. Outside walls of some buildings were sheared off, power and water lines were severed, and telephone service was disrupted. Residents dug frantically through wrecked buildings for survivors as they wailed. Firefighters from Tehran joined other rescuers in the desperate search, using dogs to inspect the rubble.

The hospital in Sarpol-e-Zahab was heavily damaged, and the army set up field hospitals, although many of the injured were moved to other cities, including Tehran.

The quake also damaged an army garrison and buildings in the border city and killed an unspecified number of soldiers, according to reports.

Many of the heavily damaged complexes in Sarpol-e-Zahab were part of construction projects under former hard-line President Mahmoud Ahmadinejad. The newly homeless slept outside in cold, huddled around makeshift fires for warmth, wrapped in blankets — as were the dead.

The official death toll came from provincial forensic authorities based on death certificates issued. Some reports said unauthorized burials without certification could mean the death toll was actually higher.

The quake was centered about 19 miles (31 kilometers) outside the eastern Iraqi city of Halabja, according to the U.S. Geological Survey, and struck 14.4 miles (23.2 kilometers) below the surface, a somewhat shallow depth that can cause broader damage. The quake caused Dubai’s skyscrapers to sway and could be felt 1,060 kilometers (660 miles) away on the Mediterranean coast.

Seven deaths occurred in Iraq and 535 people were injured, all in the country’s northern, semiautonomous Kurdish region, according to its Interior Ministry.

The disparity in casualty tolls immediately drew questions from Iranians, especially because so much of the town was new.

Kokab Fard, a 49-year-old housewife in Sarpol-e-Zahab, said she could only flee empty-handed when her apartment complex collapsed.

“Immediately after I managed to get out, the building collapsed,” Fard said. “I have no access to my belongings.”

Reza Mohammadi, 51, said he and his family ran into the alley following the first shock.

“I tried to get back to pick some stuff, but it totally collapsed in the second wave,” Mohammadi said.

Khamenei offered his condolences as President Hassan Rouhani’s office said Iran’s elected leader would tour the damaged areas Tuesday, which was declared a national day of mourning. Authorities also set up relief camps and hundreds lined up to donate blood in Tehran, though some on state TV complained about the slowness of aid coming.

Sarpol-e-Zahab fell to the troops of Iraqi dictator Saddam Hussein during his 1980 invasion of Iran, which sparked the eight-year war between the two countries that killed 1 million people. Though clawed back by Iran seven months later, the area remained a war zone that suffered through Saddam’s missile attacks and chemical weapons.

After the war, Iran began rebuilding the town. It also was part of Ahmadinejad’s low-income housing project, which aided the Holocaust-questioning hard-liner’s populist credentials but also saw cheap construction.

Under the plan dubbed as Mehr or “kindness” in Farsi, some 2 million units were built in Iran, including hundreds in Sarpol-e Zahab. Many criticized the plan, warning that the low-quality construction could lead to a disaster.

“Before its 10-year anniversary, Mehr buildings have turned into coffins for its inhabitants,” the reformist Fararu news website wrote Monday.

Seismologist Abdul-Karim Abdullah Taqi, who runs the earthquake monitoring group at Iraq’s Meteorological Department, said the main reason for the lower casualty figure in Iraq was the angle and direction of the fault line in this particular quake, as well as the nature of the Iraqi geological formations that could better absorb the shocks.

University of Colorado geological scientist Roger Bilham said earthquakes in the Zagros range, where there are more than 20 different faults, have killed more than 100,000 people in the last 1,000 years.

Because there are so many earthquakes in the region, proper construction is critical, but it “doesn’t trickle down to the villages,” Bilham said.

In Darbandikhan, Iraq, Amina Mohammed said she and her sons escaped their home as it collapsed around them.

“I think it was only God that saved us,” she said. “I screamed to God and it must have been him to stop the stairs from entirely collapsing on us.”

Residents were clearing the rubble from the streets of Darbandikhan, about 10 kilometers from the Iranian border.

The quake caused visible damage to a dam at Darbandikhan that holds back the Diyala River.

“There are horizontal and vertical cracks on the road and in the body of the dam and parts of the dam sank lower,” said Rahman Hani, the director of the dam.

No dams were damaged in Iran, the government in Tehran said.

Halabja, closest to the epicenter, is notorious for the 1988 chemical attack in which Saddam killed some 5,000 people with mustard gas — the deadliest chemical weapons attack ever against civilians.

Pakistan also extended condolences for the loss of life and injuries suffered by “our Iranian and Iraqi brethren.”

Iran sits on many major fault lines and is prone to near-daily quakes. In 2003, a magnitude 6.6 earthquake flattened the historic city of Bam, killing 26,000 people. The last major casualty earthquake in Iran struck in East Azerbaijan province in August 2012, killing over 300.

TOKYO, July 17: A moderately strong earthquake has rattled the Tokyo region, but there are no immediate reports of damage... Read More...

10:19AM most auspicious time for Dashain tika
6 hours ago

Suicide bombing at Kabul education centre kills 24, students among the victims
22 hours ago

Lee Kun-hee, who made South Korea's Samsung a global powerhouse, dies at 78
21 hours ago