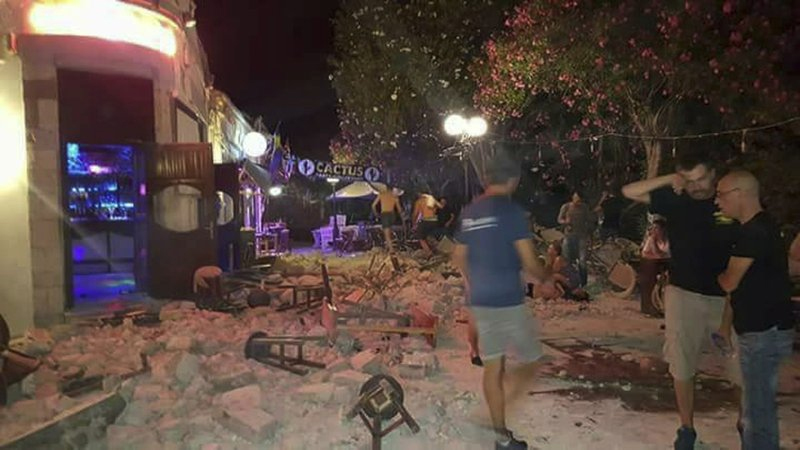 The 6.5-magnitude quake rattled Turkey's Aegean coast as well, but Kos was nearest to the epicenter and appeared to be the worst-hit, with all of the deaths and injuries reported there. Buildings with damage included the old mosque and a 14th-century fortress at the entrance to the main port.

Fallen bricks and other damage were seen in Kos's "old town" area, full of bars and other nighttime entertainment. Hundreds of tourists were spending the rest of the night outdoors, resting on beach loungers with blankets provided by staff.

Rescuers were checking for trapped people inside houses after the quake struck in the middle of the night and were heading to outlying villages to check for damage. Kos Mayor Giorgos Kyritsis said the army was mobilized along with emergency services. The island's port was among structures that sustained damaged and a ferry en route there was not docking, the coast guard said.

"The buildings affected were mostly old, and were built before the earthquake building codes were introduced," Kyritsis told state-run Greek media.

Giorgos Halkidios, Kos regional government official, said the injured included people who were underneath a building that collapsed. Ferry services were suspended due to damage at Kos's main port, and coastal roads were flooded.

According to Turkish disaster officials, the earthquake had a magnitude of 6.3, and more than 20 aftershocks have been recorded.

Esengul Civelek, governor of Mugla province, said there were no casualties according to initial assessments. She said "there were minor injuries due to fear and panic."

In Bitez, a resort town about 6 kilometers (4 miles) west of Bodrum, the quake sent frightened residents running into the streets.

Hotel guests briefly returned to their rooms to pick up their belongings but chose to spend the rest of the night outside, with some using sheets and cushions borrowed from nearby lounge chairs to build makeshift beds, according to an AP reporter on the scene.

Greece and Turkey lie in an especially earthquake-prone zone.

BABIYACHAUR (Myagdi), Aug 18: Two shepherds were hurt and at least 72 sheep killed when lightning struck them at Girka... Read More...