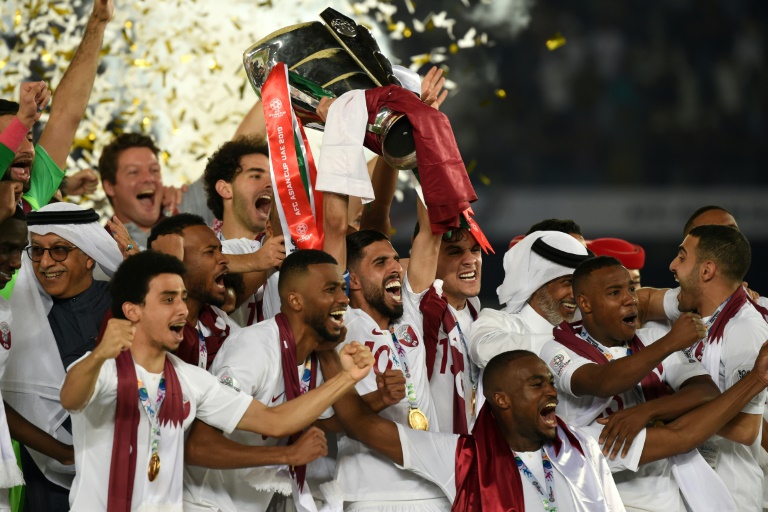 Qatar's players celebrate with the trophy after winning the 2019 AFC Asian Cup final football match between Japan and Qatar at the Zayed Sports City Stadium in Abu Dhabi on February 1, 2019. Photo Courtesy: AFP/RSS

DOHA, Feb 7: Qatar's remarkable Asian Cup victory may have been a sporting triumph which sparked wild celebrations in Doha but it is almost certain to come at a political price, analysts say.

The win -- in the hostile capital of the United Arab Emirates, one of its opponents in a bitter regional dispute -- is expected to lead to further animosity between Qatar and the Saudi-led bloc of rival nations.

And even just days after Qatar beat Japan 3-1 in the final, it may have already deepened the Gulf diplomatic impasse.

"Any sense of embitterment in Abu Dhabi at the way the tournament they hosted turned out may translate into an escalation of rhetoric against Qatar," said Kristian Coates Ulrichsen, a research fellow at Rice University.

He added: "The response to Qatar's run in the Asian Cup has, if anything, deepened the split within the Gulf.

"Omanis and Kuwaitis have rejoiced in Qatari success and have done so in extremely public fashion, visibly emphasising their rejection of the blockading states' attempt to isolate Qatar in the region."

Qatar's first ever Asian Cup win is an astonishing story on numerous levels -- a modern-day sporting parable, soaked in geopolitics and symbolism.

It is a powerful Qatari riposte to critics who long ridiculed the 2022 World Cup host for its lack of footballing prowess.

It is a vindication of the wealthy Gulf state's huge spending to develop talent at its Aspire Academy -- 13 of the 23-man squad were graduates, including top scorer Ali Almoez.

But it is far more than just sport.

Since June 2017, Saudi-led countries have cut ties with Doha, claiming it supports terrorism and wants a better relationship with Riyadh's arch-rival, Tehran.

Qatar denies the charges, says it is being punished for pursuing an independent foreign policy and its enemies want regime change in Doha.

As a result, few, if any, Qataris travelled to the UAE to watch matches, claiming they were fearful about what would happen to them.

Practically their only supporters were a group of Omanis, subsequently leading Qataris to celebrate with Omani flags in Doha.

Notably, Qatar beat Saudi Arabia and the UAE, the latter victory seeing their players pelted with shoes and bottles by a partisan crowd.

The 4-0 victory over the UAE was, according to some, better than the cup win.

Many Qataris celebrated by holding up four fingers -- one for each of the neighbouring boycotting countries, said Ulrichsen.

That gesture also matched the one used by Qatar-backed Muslim Brotherhood supporters following the overthrow of Mohamed Morsi in Egypt in 2013.

He then made his first trip abroad since the victory, notably to regional peace-broker Kuwait, where he presented Emir Sabah al-Sabah with a maroon Qatar football shirt.

And there is yet more symbolism, argues James M. Dorsey, author and a senior fellow at the S. Rajaratnam School of International Studies.

"The victory emphasises to Qatar that it can stand on its own, whatever the obstacles," he said.

"Qatar's image and reputation has gained advantage over its rivals, especially given the apparent calmness on Qatar's team when faced with sometimes rancorous rivals," said Chadwick.

The "escalation" Ulrichsen spoke about is likely to focus on the 2022 World Cup, said Dorsey.

"I think what you are going to see is Qatar's victory is going to escalate opposition by primarily the UAE and Saudi Arabia to Qatar hosting the World Cup," he added.

Next month, FIFA will rule on whether the 2022 World Cup will include 32 or 48 teams, and whether Qatar should share games, potentially with neighbouring rivals.

He pointed to a previous Asian Cup victory -- Iraq in 2007 -- where people celebrated during a period of sectarian violence, but trouble soon flared again.

"Sports and politics are inextricably enshrined," he added.

A year of struggle: How Qatar is coping up with blockade

KATHMANDU, June 5: Tuesday marks the completion of Qatar’s one year of struggle against the blockade imposed on it by its... Read More...