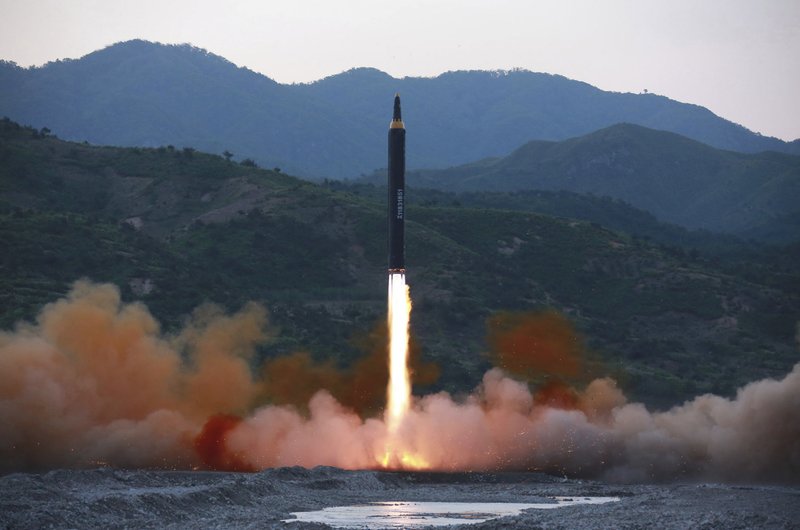 SEOUL, August 11: With North Korea threatening to send a salvo of ballistic missiles close to a U.S. military hub in the Pacific, pressure could grow for Washington to put its multibillion-dollar missile defense system into use and shoot them out of the air before they can pose a real threat.

But should it? Could it?

North Korea claims it is in the final stages of preparing a plan to launch four intermediate-range ballistic missiles over Japan and into waters just off the island of Guam, where about 7,000 U.S. troops are based.

Guam is a launching point for U.S. strategic bombers that the North, virtually flattened by U.S. bombs during the 1950-53 Korean War, sees as particularly threatening. U.S. bombers have flown over the Korean Peninsula several times to show American strength after Pyongyang’s missile tests.

Unlike past missile launches that landed much closer to North Korean territory, firing a barrage toward Guam would be extremely provocative, almost compelling a response. Trying to intercept the missiles, however, would open up a whole new range of potential dangers.

Each missile North Korea launches brings it closer to having a reliable nuclear force capable of striking the United States mainland, or its allies and military facilities in Asia. Kim Jong Un has radically accelerated the pace of the North’s missile development, and many experts believe it could have an intercontinental ballistic missile able to hit major American cities within a year or two.

It already has ballistic missiles that can strike Japan, a key ally and host to roughly 50,000 U.S. troops. It’s very possible the North could attack Japan and U.S. bases there with nuclear, chemical or biological warheads. But the North clearly still needs to conduct more tests to hone its technical skills.

In particular, doubts remain over whether it has perfected re-entry technology for its warheads. It also needs to train its troops to operate effectively in the field to handle nuclear warheads and missiles on short notice.

Shooting down the North’s missiles would hamper its ability to glean the flight data it needs. And if his missiles prove no match for U.S. interceptors, Kim Jong Un might be chastened into thinking twice before conducting any more.

Intercepting a missile over the open ocean has the added benefit of not being a direct attack on North Korea itself. It would send a very strong message but leave more room for de-escalation than a pre-emptive strike against military facilities or other targets on the ground.

A big problem is that failure would not only be humiliating, but could actually weaken the U.S. position more than doing nothing at all.

The U.S. has pumped billions of dollars into its missile defense systems and sold hundreds of millions of dollars’ worth to its allies, including the very controversial deployment of a state-of-the-art system known by its acronym, THAAD, in South Korea. The U.S. military has also conducted two ICBM interceptor tests since May. Officials called them successes, but critics say they don’t replicate actual conditions close enough to be a fair gauge.

Taking out Guam-bound missiles would require successful intercepts by ship-based SM-3 “hit-to-kill” missiles over the Sea of Japan or land-based PAC-3 “Patriot” missiles on Guam. The ship-based defenses are designed to kill a missile that’s in midflight, while the ground-based ones take out whatever missiles make it through and are in the final stage.

But it’s highly questionable whether either or both would be able to take down the full salvo of four North Korean missiles. President Donald Trump hinted the defense system still needs beefing up on Thursday when he told reporters the U.S. will be spending billions more on them.

A failed intercept would likely embolden the North to move ahead even faster. It could also have a chilling psychological impact on allies like Japan and South Korea, which might seek to build up their own nuclear forces independently of Washington. Rival powers China and Russia, meanwhile, might see the exposed weakness as an opportunity to push forward more assertive policies of their own.

Even if it were successful, a policy of shooting down missiles would undoubtedly raise tensions, and put an uncomfortable squeeze on American allies on the front lines.

Worst of all, if American intentions aren’t clear, an attempt to intercept a missile might be misinterpreted by Pyongyang — or Beijing or Moscow — and escalate into a real shooting war.

On a technical level, just as the North learns valuable information on its capabilities with each launch, so does the U.S. military. Shooting down the missiles would cut that intelligence off.

If the U.S. were to pursue this strategy, it would have to be hugely confident of success. And it would definitely want its allies fully on board.

ANKARA/ISTANBUL, April 17: President Tayyip Erdogan declared victory in a referendum on Sunday to grant him sweeping powers in the biggest... Read More...