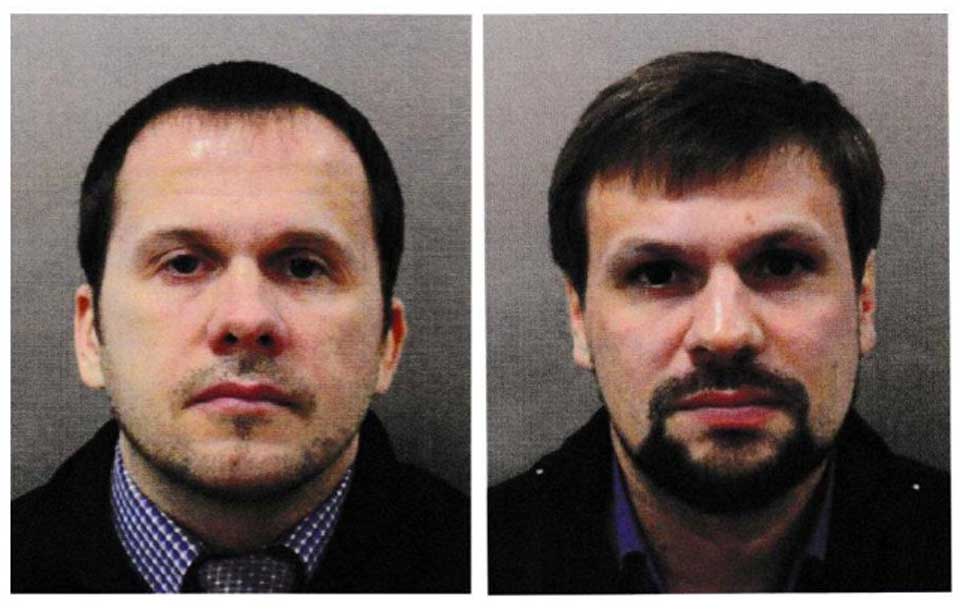 FILE PHOTO: Alexander Petrov and Ruslan Boshirov, who were formally accused of attempting to murder former Russian intelligence officer Sergei Skripal and his daughter Yulia in Salisbury, are seen in an image handed out by the Metropolitan Police in London, Britain September 5, 2018. Metroplitan Police handout via REUTERS/File Photo

British prosecutors last week identified two Russians who they said were operating under aliases - Alexander Petrov and Ruslan Boshirov - who they said had tried to murder the Skripals with a military-grade nerve agent in England.

Putin, speaking at an economic forum in the Russian port city of Vladivostok, said Russia had found the two men, that they were civilians, and there was nothing special or criminal about them and that he hoped they would come forward and tell the world their own story.

“We of course checked who these people are. We know who they are, we found them. Well, I hope they will come out themselves and speak about themselves. It will be better for everyone,” he said.

“There’s nothing special and criminal about it, I assure you. We’ll see soon...”

“They are civilians of course. I would like to appeal to them so that they hear us today. They will come somewhere, to you, the mass media...”

Britain has said the two suspects were Russian military intelligence officers almost certainly acting on orders from high up in the Russian state. Russia has repeatedly denied any involvement in the incidents.

Russia’s GRU military intelligence service, which has agents across the globe and reports to the chief of general staff and the defence minister, does not have a website and does not comment publicly on its actions.

Skripal - a former GRU colonel who betrayed dozens of agents to Britain’s MI6 foreign intelligence service - and his daughter were found slumped unconscious on a bench in the English city of Salisbury in March. They spent weeks in hospital before being discharged.

A woman near Salisbury, Dawn Sturgess, died in July and her partner Charlie Rowley fell ill after Rowley found a counterfeit bottle of Nina Ricci perfume containing Novichok and brought it home.

Film icon Arnold Schwarzenegger told Russians in a video posted on social media Thursday they’re being lied to about the... Read More...