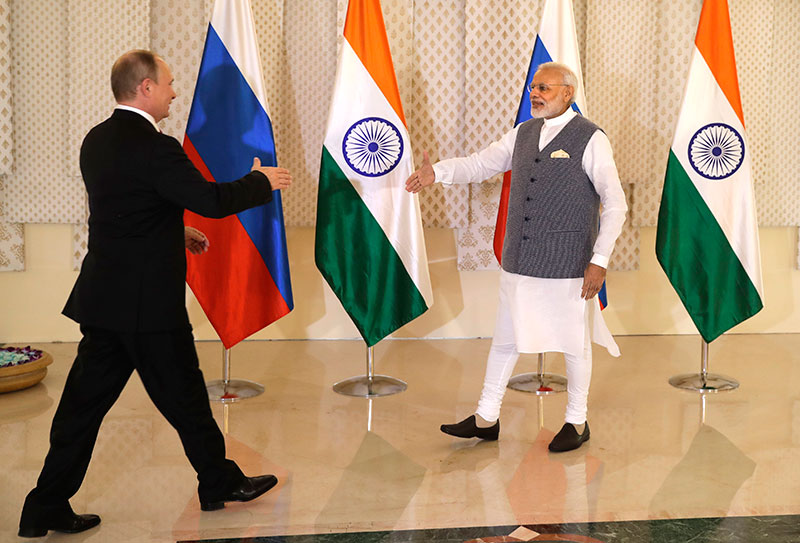 Indian Prime Minister Narendra Modi, right, shakes hand with Russian President Vladimir Putin prior to their annual bilateral meeting, on the sidelines of the BRICS summit on Saturday, where they are expected to discuss Syria and Afghanistan in Goa, India, Saturday, Oct. 15, 2016. (AP)

BENAULIM, India, Oct 15: Leaders of India and Russia on Saturday began their annual talks that are expected to conclude with new defense deals and the smoothing over of recent irritants in their decades-long close relationship.

Russian President Vladimir Putin and India's Prime Minister Narendra Modi, meeting in the beach resort state of Goa in western India, will discuss regional security issues and the threat posed by global terrorism. They also hope to stem the drift in their ties as India engages more closely with the United States.

The two leaders are also expected to sign an agreement for the next, the fifth and sixth reactors, of the power plant.

For decades, India and Russia have shared a close relationship that dates back to the days of the Cold War, when the United States tilted toward India's neighbor and rival, Pakistan. India had to depend on Russia for political support as well as the supply of billions of dollars worth of military hardware. Even today, nearly 70 percent of India's defense equipment has been procured from Russia, according to India's Defense Ministry.

But as India's economic clout has grown, it has also diversified its defense shopping, with major purchases of military hardware from the United States, Israel and France.

India is one of the world's biggest arms importers, with an economic boom that has enabled it to modernize ts military. New Delhi needs everything from fighter aircraft to submarines, as part of a $100 billion modernization of its military hardware.

On Saturday, India and Russia are expected to sign a multi-billion dollar deal for the delivery of a Russian-made anti-missile air defense system that can track around 300 targets and shoot down up to three dozen incoming missiles simultaneously, providing a security cover that stretches several hundred kilometers (miles).

The two leaders will also use the occasion to overcome differences that have cropped up between them in the past few years. Russia has been wary of India's growing engagement with the United States. A recent military logistics agreement signed by New Delhi and Washington has caused significant concern in Moscow, as it sees its long-standing partner moving closer to the West.

India is also expected to raise its concern about Russia's growing ties with New Delhi's archrival Pakistan. Russia and Pakistan recently conducted joint military exercises, something that would have been unthinkable for Indians to imagine even a short while ago.

India also has worries about Russia's deepening ties with another of its neighbors — China. Moscow, hit by Western sanctions, has in the past year drawn closer to Beijing — a development that New Delhi has watched with dismay.

"We hope to convey our concerns to Russia and are confident that Moscow will reflect on what worries India," Pankaj Saran, India's ambassador to Russia, said Friday.

Putin and Modi were meeting on the sidelines of a summit of the leaders of the BRICS countries that comprise Brazil, Russia, India, China and South Africa. The BRICS summit is scheduled to begin late Saturday with an informal dinner of the leaders.

Light to moderate rain forecast for today
4 minutes ago