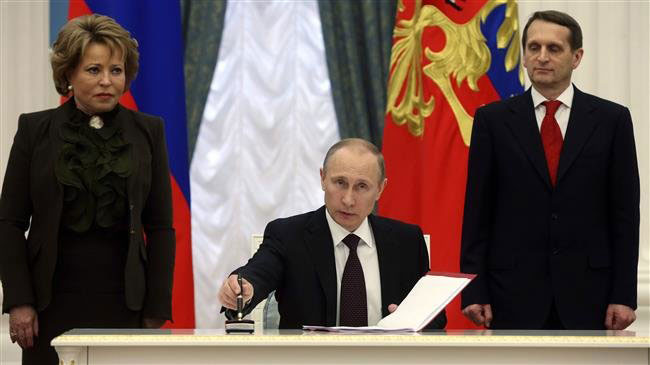 MOSCOW, Nov 30: Russia’s President Vladimir Putin has endorsed a much-awaited agreement for the establishment of a free trade zone between Iran and the Eurasian Economic Union (EEU) thus facilitating the process for the Islamic Republic to join the Moscow-led regional economic bloc.

According to a Kremlin announcement, the agreement became a federal law after Putin’s endorsement and was accordingly forwarded to the relevant institutions to be implemented.

The move had been approved earlier this month by Russia’s State Duma as well as the country’s Federal Assembly.

Apart from authorizing the creation of a free trade zone between Iran and the EU, the document would be meant to support their cooperation over a wide range of economic and commercial areas.

The EEU is comprised of Russia, Armenia, Belarus, Kazakhstan and Kyrgyzstan. It is an international organization created with the aim of encouraging regional economic integration through the free movement of goods, services and people within the union.

The bloc was established in 2015, after it superseded the Eurasian Economic Community that functioned from 2000 to 2014. The union has an integrated single market of 183 million people and a gross domestic product of over $4 trillion.

The EEU’s prime ministers resolved in March to make talks with Tehran a priority, scenting an opportunity to expand beyond the bloc’s combined market of 183 million people.

Russia’s President Putin said last August that Moscow wanted Iran to join the EEU – a move that was seen as crucial in bringing the two countries closer in their plans to form a strategic partnership.

Putin emphasized that a research had already started over the possibility of creating a free-trade zone between Iran and the EEU.

“Iran is Russia’s longtime partner. We believe that bilateral relations will benefit from the reduction of tensions around Iran following the comprehensive agreement on the Iranian nuclear program,” Putin was quoted by the media as saying.

ANKARA, July 27: Turkey has vowed to oppose US efforts to smother Iranian crude exports. Ankara is in a strong... Read More...

DUBAI/DOHA, June 24: Four Arab states that imposed a boycott on Qatar have issued an ultimatum to Doha to close Al... Read More...