PSG's attack bails out poor defense in 3-0 win vs. Basel 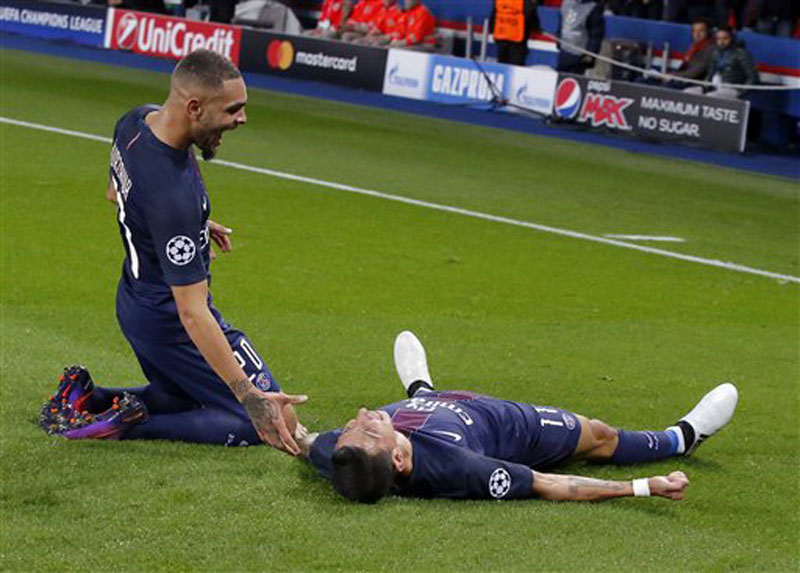 PARIS, Oct 20: Paris Saint-Germain's attack bailed out its shaky defense in an unconvincing 3-0 win against Basel in the Champions League on Wednesday.

By the time winger Angel Di Maria scored five minutes before halftime, the visitors had already missed several chances in a match more even than the result suggested. Better sides would have punished PSG.

"We conceded a few chances because of bad positioning. Our defense wasn't always in place," PSG midfielder Adrien Rabiot said. "You need some luck in this type of game."

Brazilian striker Lucas netted in the 62nd minute with his seventh goal of a productive season, and striker Edinson Cavani added a third with an injury-time penalty for his 13th goal in 11 games.

Finishing aside, it was sloppy stuff from a PSG side with its sights set on winning the Champions League for the first time.

"It was a very difficult game for us, particularly at the start," Lucas said. "Our second half was much better."

The result, which keeps PSG level on seven points with Group A leader Arsenal, was ultimately harsh on a Basel side that looked slick and impressive going forward, yet can also only blame itself for hitting the post three times from close range.

"We're going home empty-handed and that hurts," Basel coach Urs Fischer said. "Basel should have been 2-0 up but that makes no difference in the end."

Di Maria's goal ended a barren run of 17 games without a goal for club and country.

He smashed the ball into the roof of the net following good work from Blaise Matuidi down the left. It was his first goal since scoring for Argentina against Chile at the Copa America in June, and first for PSG since the League Cup final against Lille on April 23.

Lucas guided the ball into the bottom right corner from just inside the area following a cross from the left by Serge Aurier.

With the clock running into injury time, Cavani was tripped in the penalty area and slammed the spot kick down the middle.

All well-taken goals but the first half highlighted PSG's limitations rather than showcasing its credentials as a Champions League contender — and the way PSG players celebrated with enthusiasm in front of their fans was somewhat misplaced.

Basel, not a European force by any reckoning, clearly exposed PSG's defensive fragility on set pieces and new coach Unai Emery still has much work to do to make his French team a compact unit.

"We will work to do better," Emery said. "But it's a question of the defense and the attack, to improve the positioning of our players in order to improve our balance."

Having led Sevilla to three straight Europa League titles, the Spaniard was hired over the summer to take PSG further in the Champions League.

PSG has gone out at the quarterfinal stage in the past four seasons. But on this evidence, PSG looks some way off being a contender.

"The first half wasn't good, that's the truth," Emery said. "It was easier at 1-0 because our opponents opened up."

With PSG midfielder Thiago Motta sidelined, there was little protection in front of the defense, and Basel poured into the space. With the inexperienced goalkeeper Alphonse Areola unable to properly command his back four, crosses were poorly dealt with.

"If you count the chances, we should have had at least a point," Fischer said. "We showed that we could put PSG in danger at home."

Basel right back Michael Lang headed against the crossbar in the fifth minute after a corner to the back post was nodded back by Iceland midfielder Birkir Bjarnason.

Moments later, attacking midfielder Renato Steffen sprinted clean through, drawing a fine save from Areola. Although the rebound came to him quickly, Ivory Coast striker Seydou Doumbia should have kept his shot down.

Just before Di Maria's goal, Doumbia headed against the post from another cross.

Gurkha soldier among 7 killed in attack at Indian army base

KATHMANDU, Nov 30: A Gurkha soldier serving in the Indian Army was killed after militants attacked an army base near... Read More...

LONDON, Aug 4: A Norwegian teenager of Somali origin is suspected of going on a knife rampage through London's tourist... Read More...