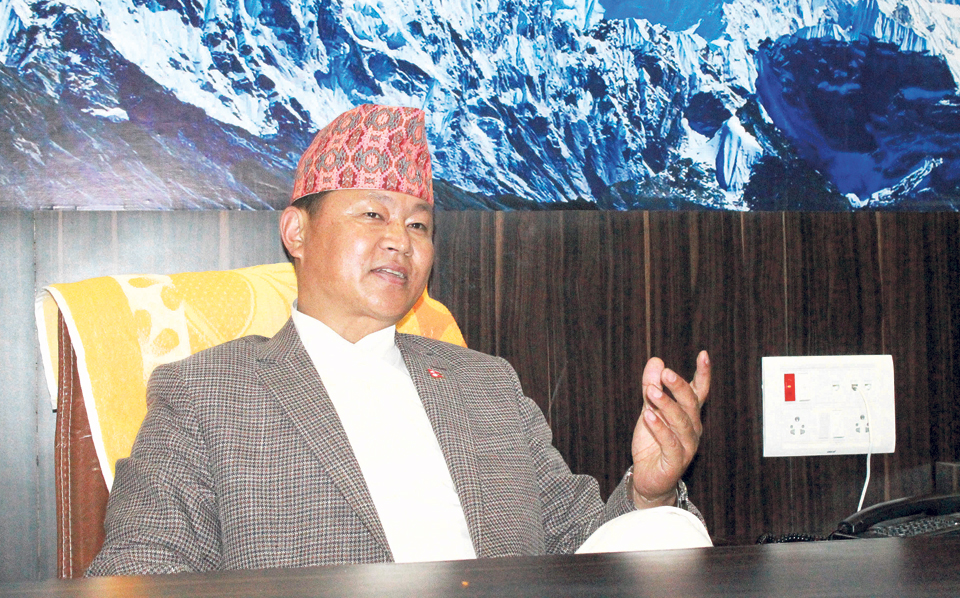 We have planned to form a small and far-reaching cabinet in Province 1: Sherdhan Rai .

Sherdhan Rai is among the few lucky ministers of CPN-UML. He is often seen as a loyal supporter of Prime Minister KP Sharma Oli. Some even believe that his good rapport with the PM is what led him to his glorious victory for the reputed post of Chief Minister of Province 1 by defeating senior leaders. Republica’s Raju Adhikari caught up with Rai to talk about the priorities and plans of the provincial government. Excerpts:

What is the provincial government doing at the moment?
As of now, preparations are underway to make people realize the formation of provincial government. We have announced a 100-day program to inform people about the priorities, plans and responsibilities of this government. Besides that, we are busy formulating laws and policies which are essential for the operation of any government. Not just that, we are also busy managing staff and assigning them their duties.

Some have criticized the ‘100-day program’ as hype. Is it true that the provincial government included all the big projects just to attract people?
It is important to dream big to do big. This program is a vision and a draft of the big dream seen by the government. We are yet to do a lot and this is just a start.

There have been differences in opinion regarding the capital of the province. What’s your take on that?
This really is a critical issue. But that does not mean we should move forward without tackling it. We will be holding discussion with all provincial members and will make a decision based on two-thirds majority. Yes, there are differences in opinion and proposal for fixing a permanent capital and name of the province. Our province is a common home for people of different caste, religion, language and ethnicity. So, it’s obvious that they will have different opinion. We will make sure that our decision won’t hurt the feelings and sentiments of the people.

Will Biratnagar remain as the permanent capital or will it change?
It won’t be right for me to tell whether the capital will be shifted or not as it will be decided by the majority of provincial assembly members. No matter where the capital will be fixed, infrastructures won’t be limited to a certain area from now onward. But the capital must be fixed in a place which is accessible to all.

You have been repeatedly talking about two-thirds majority. Are you trying to impose your will in the name of majority?
I am repeating it again and again because that’s what the constitution states. Either it’s the decision of naming province or fixing the capital, we won’t make any decision without the majority of provincial assembly members. Yes, it is true that the left alliance has two-thirds majority in the province but we won’t ever brag about it.

Only a five-member cabinet has been formed so far. What is the reason behind the delay in expansion of the cabinet?
We have planned to form a small and far-reaching cabinet. We have intentionally formed a five-member committee so that it will be easier and convenient to work across the province.

What are the projects for the social and economic development of the province?
We have abundance of prospects and potentials. We have five mountains above 8,000 meters including the highest peak of the world Mount Everest. Arun valley, the deepest valley of the world and Kachankawal the lowest point of the country are in Province 1. We can develop this province as a tourism, agriculture and industrial hub. We will wisely utilize the budget provided by the central government for development of these sectors. Besides that, other major projects such as metro, monorail, cable car smart city, university, and employment will also be on our priority list.

What about the plans and projects aimed to uplift the living standard of the marginalized and underprivileged people?
The prosperity and progress that we are talking about is related to the development of every group of people. We are clear that development is not possible unless every citizen becomes able to use the facilities provided by the government. So, with the coordination of various organizations, we will be making efforts to uplift the living standard of the underprivileged people.

Provincial government has announced to provide 10 percent reservation in health and education for the poor people. Will it be implemented?
There are a lot of challenges but that’s not going to stop us from implementing our plans. We are focusing on the overall development of the province for which it is important to bring people of all corners in the forefront.

The obstruction of Indian government has badly affected the export of agricultural products of Province 1. What are your plans solve this problem?
We will be formulating effective plans and policies to make agriculture more systematic and scientific. Not just that, we will make sure that farmers will not have to worry about market and will also be provided with reasonable payment for their produces. But at first, we will have to formulate plans for that.

This is not the first time a minister has made big promises to the people. But they hardly stick to their words. Why should we trust you?
Now that the country has moved toward the path of peace, stability and good governance, all works conducted by each government will be citizen centric centered from now onwards. What happened in the past was the result of weak government but it won’t be repeated now.

BUTWAL, August 5: Province 5 is still struggling to resolve the row over the provincial capital and name of the... Read More...

MAKWANPUR, May 31: In a recent provincial assembly meeting of Province 3, parliamentarians demanded the provincial government to declare the permanent... Read More...

BIRATNAGAR, May 20: Difference in opinions of the party members and the indecisiveness of the provincial government have made the issue... Read More...

All IOM exams for Monday postponed
54 minutes ago

SEE and Grade 12 exams in April and May, respectively
56 minutes ago

Sita Dahal inflicted with COVID-19, kept in ICU
58 minutes ago