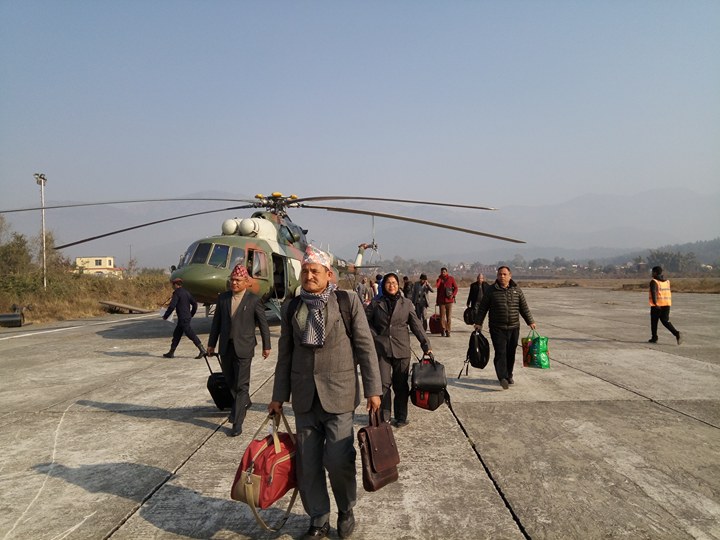 For the residents of the province, the incident has made them question whether or not their elected representatives would really be available when they need services from them.

SURKHET, Jan 22: On the day of the oath-taking ceremony, Provincial Assembly members of Province 6 were still in the capital instead of being in their own province from where they got elected to serve the people.

They reached Surkhet on Sunday morning for their swearing-in ceremony in a state-sponsored trip by chartering a helicopter of Nepal Army.

At a time when the residents are having big hopes from their elected representatives, absence of such a large number of Provincial Assembly members from one of the most impoverished provinces is not seen as a good sign to come, locals say.

The Provincial Assembly members arrived in Surkhet airport with heavy luggage, bags and shopping items. One parliamentarian was spotted with a brand new television set that she purchased back in the capital. Many of them were grinning as they alighted the helicopter.

According to sources, the parliamentarians were not able to board a plane a day before as flights to Surkhet via Nepalgunj were affected due to bad weather. They stated that the unavailability of direct flights from Kathmandu to Surkhet was another reason for chartering the helicopter.

Governor Durga Keshar Khanal administered the oath of office and secrecy to the Provincial Assembly members in the afternoon.

DANG, June 24: Three months after the formation of the provincial assembly in Province 5, lawmakers of the province are yet... Read More...

KATHMANDU, Jan 21: Amid confusion regarding the language to administer oath of the office and secrecy to elected members of... Read More...

The way Balen has come forward is positive: Dahal
25 minutes ago