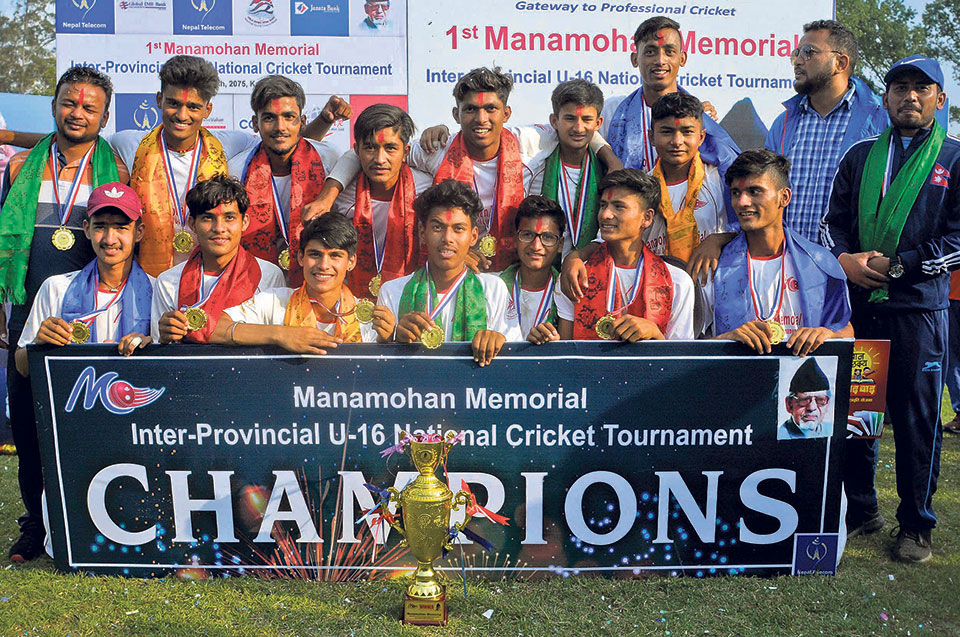 Members of Province 7 pose with their trophy after winning the Manmohan Memorial Inter-province U-16 Cricket Tournament title at the TU Cricket Ground in Kirtipur on Wednesday. Photo: Bijay Gajmer

KATHMANDU, May 3: Province 7 has clinched the first Manmohan Memorial Inter-province U-16 Cricket Tournament, defeating Province 2 by 24 runs on Wednesday.

In the final match played at the TU Cricket Ground in Kirtipur, Province 7 won the toss and elected to bat first, and set a target of 209 runs for the loss of seven wickets in the allotted 30 overs. In reply, Province 2 failed to chase the target and was limited to 184 runs for the loss of nine wickets in the allotted 30 overs.

Province 7 displayed a stable batting performance and only the opener Rajan Singh failed to reach the double digit as he hit six runs off 16 balls.

Rahul Bhandari scored the highest 38 runs off 33 balls for the winning team hitting two sixes and two fours, while Roshan Sawas hit not out 37 runs off 18 deliveries which included two sixes and a four. The other opener Hridaya Bithari smashed 33 runs off 45 balls with three boundaries.

Bibek Yadav picked up two wickets for Province 2 giving away 36 runs in the six overs he bowled, while Bikram Kushwaha, Samsad Ali Mansuri, Nikhil Singh and Trit Raj Das pocketed a wicket each.

Amit Yadav was the standout player of the match as he scored 80 runs off 64 balls, but could not prevent the loss for Province 2, while Das hit 27 off 33 with a four and the opener Sahil Patel was out for 25 off 32 with three boundaries. Imran Sheikh was the other player to reach the double digit as he made 12 runs off 11 balls including a four.

Manoj Lothyal was the pick of the bowlers as he nicked five wickets giving away 36 runs in the six overs he bowled for Province 7, while Narendra Sawad claimed three and Mahesh Sawad picked up a wicket.

Lothyal was named the man-of-the-match.

Province 2’s Bibek Yadav was named the player of the series and was prized with Rs 10,000.
Also, Amit Yadav of Province 2 and Narendra Saud, Rajan Singh, and Hridaya Bithari of Province 7 were adjudged the best bowler, the best keeper, and the best fielder of the tournament, respectively. Yadav and Saud bagged Rs 5,000 each, while Singh and Bithari were prized with trophies each.

KATHMANDU, May 2: Province 7 and Province 2 are set to vie for the title of the ongoing first Manmohan Memorial... Read More...