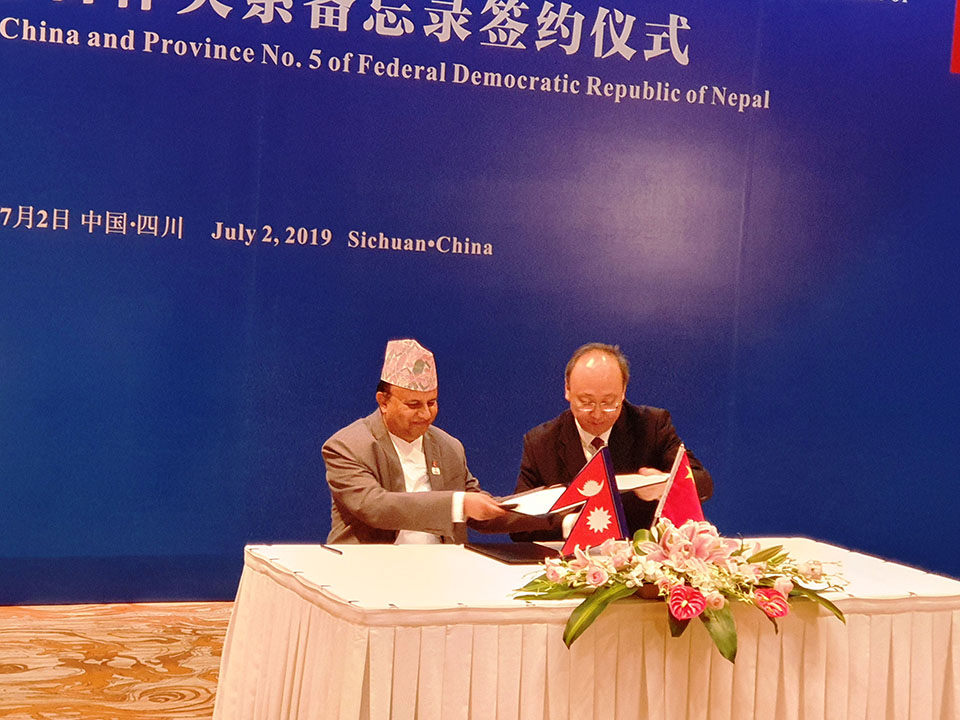 On the occasion, Chief Minster Pokharel expressed his confidence that the agreement would contribute to the promotion of bilateral ties between the two countries to a larger extent.

Governor Li said that China and Nepal expressed happiness on the growing ties between the two countries.

"The signing of the MoU is expected to help charter a new course in our bilateral ties," he said.

Chief Minister Pokharel conveyed the message of Prime Minister KP Sharma Oli to the provincial leaders. He said that deepening ties between provincial governments of Province 5 and Sichuan Province would help to promote bilateral ties between the two countries.

CM Pokharel also extended an invitation to the Sichuan Governor for the visit to State-5 and Lumbini, the birthplace of Gautam Buddha.

Pokharel shared that the Gautam Buddha international Airport will come into operation soon in Bhairahawa. He also sought Chinese assistance to establish direct flights between Chengdu and Bhairahawa.

Governor Li thanked Pokharel for extending the invitation to visit Lumbini. Li said that the two sides can further discuss Nepal's proposal to establish direct flights between Chengdu and Bhairahawa.

Pokharel also noted that Nepali people are looking forward to the visit of Chinese President Xi Jinping to Nepal. "I request you to convey this message to President Xi," he said.

Chief Minister Pokharel had reached Chengdu on Monday on a ten-day visit at the invitation of the International Department of Chinese Communist Party.

RUPANDEHI, Jan 23: Overcrowded prisons is not a new issue for our country.  Stories of dozens of prisoners sleeping in... Read More...

Retreating Russians leave their comrades’ bodies behind
35 minutes ago