Province 5 and departmental teams to clash in semifinals 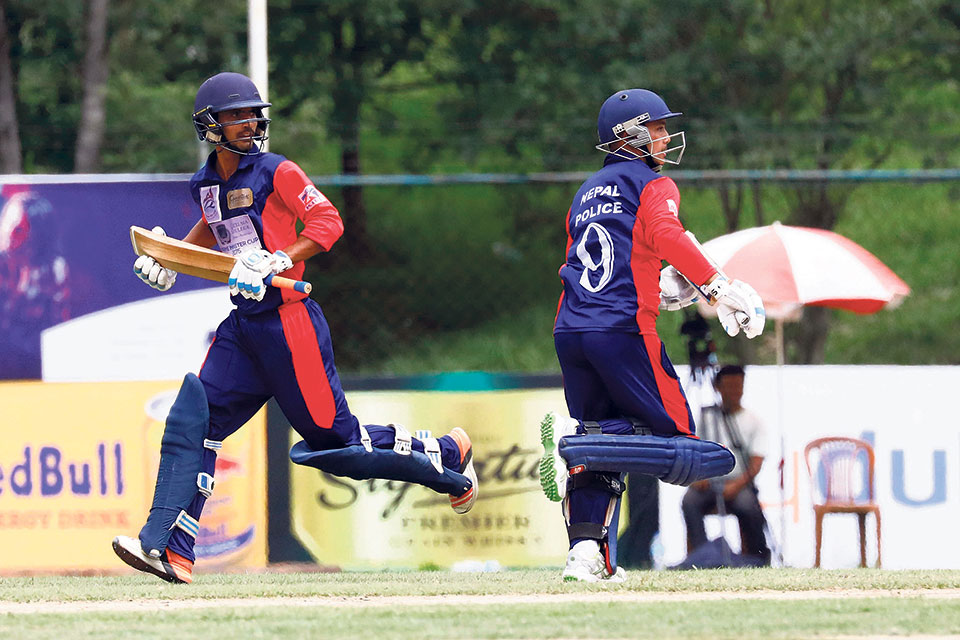 Nepal Police Club’s Amit Shrestha (right) and Sunil Dhamala run between the wickets during a Group B match of the Inter-provincial Prime Minister Cup one day cricket tournament at the TU Cricket Ground in Kirtipur on Wednesday.

KATHMANDU, June 7: Nepal Police Club overcame Province 5’s total of 200 runs in 44 overs by seven wickets to top the Group B table of the ongoing Inter-provincial Prime Minister Cup (PM Cup), and is set for the second semifinal clash with Armed Police Force (APF) Club on Saturday.
Meanwhile, the losing team of the day, Province 5, will face the Group A table-topper Tribhuvan Army Club on Friday.

Most of the batting order came to the party for the chase as openers Sunil Dhamala (36), Amit Shrestha (30), and number three batsman Dilip Nath (24) made their shares of contribution for the successful chase.

Province 5’s Sandeep Sunar picked up two wickets in his nine overs aided by Lal Adhikari’s solo wicket but that could not prevent their first defeat of the tournament.

Earlier, Nepal Police spinners kept a stranglehold in Province 5 run-rate throughout the innings to keep them at 4 runs per over at the end of the first innings. Left arm spinner Lalit Rajbanshi led from the front picking up crucial wickets of Province 5 skipper Shakti Gauchan and top-scorer Shankar Rana to limit the scoring. Rana made 44 runs opening the batting with four boundaries and a six. He faced 78 deliveries. Gauchan, who promoted himself at number 4 could only make a run before being trapped LBW on attempted reverse sweep.

All-rounder Airee had a good day with ball as well, completing his quota of 10 overs registering three maidens, conceding 22 runs, and taking a wicket of Rajbir Singh who made 21 runs from 47 deliveries.

Sushil Kandel was wicket-less in his 10 overs but he conceded mere 34 runs. Ram Naresh Giri also completed a brace dismissing Sunar who made 20 runs at top of the innings with two fours and a six. Giri also removed Adhikari for a duck.

Saurav Khanal for Province 5 made valuable 42 runs batting at the lower order, facing 54 deliveries including five fours and a six. Krishna Karki and Bikram Bhusal also chipped in with 26 and 20 runs respectively to provide much needed runs addition to the total.