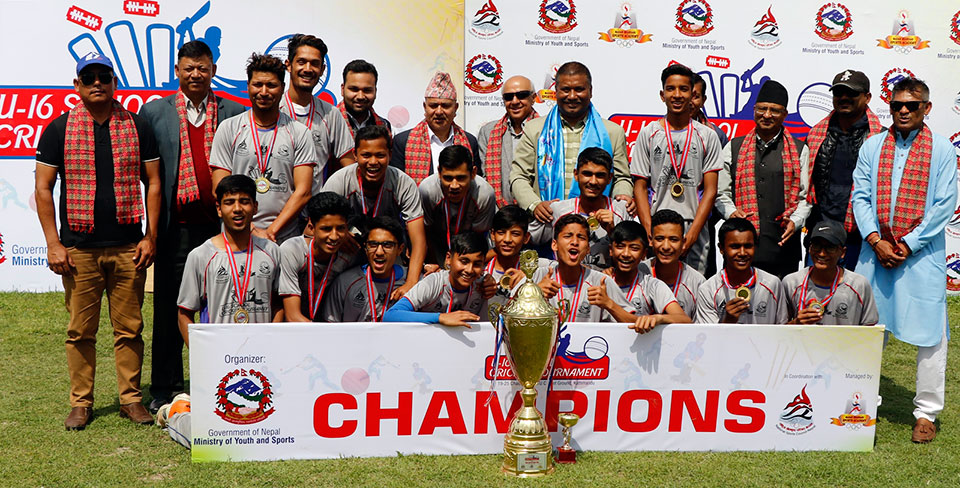 Members of Province 3 pose with the trophy as they celebrate, alongside national cricket team head coach Jagat Tamata (right), after defeating Province 5 to win the U-16 cricket league at the Tribhuvan University Cricket Ground in Kirtipur on Monday. Photo: Republica

KATHMANDU, April 9: Province 3 has defeated Province 5 by 33 runs in the final match of the U-16 national cricket league played at Tribhuvan University cricket ground on Monday.

Province 3 made early inroads in the match by reducing Province 5 to 32 runs for the loss of three wickets during the chase. Bishal Bikram KC then shared a partnership of 61 runs with Amar Mishra to keep the losing team in the match. However, Krish Karki removed KC for 44 runs to end Province 5’s hopes of salvaging win in the match. KC faced 47 deliveries scoring six boundaries. Mishra scored 21 runs from 44 deliveries including two fours and a six.

Bibek Darai and Deepak Bohora shared two wickets each for the winning team. Sakriya Karki and Tilak Bhandari also chipped in a wicket each.

Earlier, Province 3 also had a horrible start losing three wickets for 37 runs on the board after winning the toss and batting first. From there, Bhattarai scored 56 runs from 71 deliveries which included two boundaries to rescue his team from a difficult position. He shared a partnership of 58 runs for the fourth wicket. He then combined with Mahat to stitch a crucial partnership of 55 runs for the fifth wicket to help Province 3 post a respectable total. Mahat scored unbeaten 34 runs from 32 deliveries which included a four and a six.

Ramesh and Suraj Khadka picked up two wickets each for Province 5.

Basant Shahi Thakuri and Manjoor Alam have been selected as coaches for the U-16 national cricket team that is set to participate in the upcoming ACC U-16 Eastern Region Tournament being held in Chiang Mai of Thailand from April 18 through 29.

Seven provinces had participated in the selection tournament organized by the Youth and Sports Ministry in coordination with National Sports Council.

Defending champion Nepal will start its campaign to retain the trophy against Myanmar on April 20 at the Prem Tinsulanonda School cricket ground.

KATHMANDU, Jan 11: The Indian Embassy in Kathmandu, in association with Central Hindi Department under Tribhuvan University, organized an event to... Read More...