Province 2 suffers agro loss worth Rs 3.59b due to floods, landslides 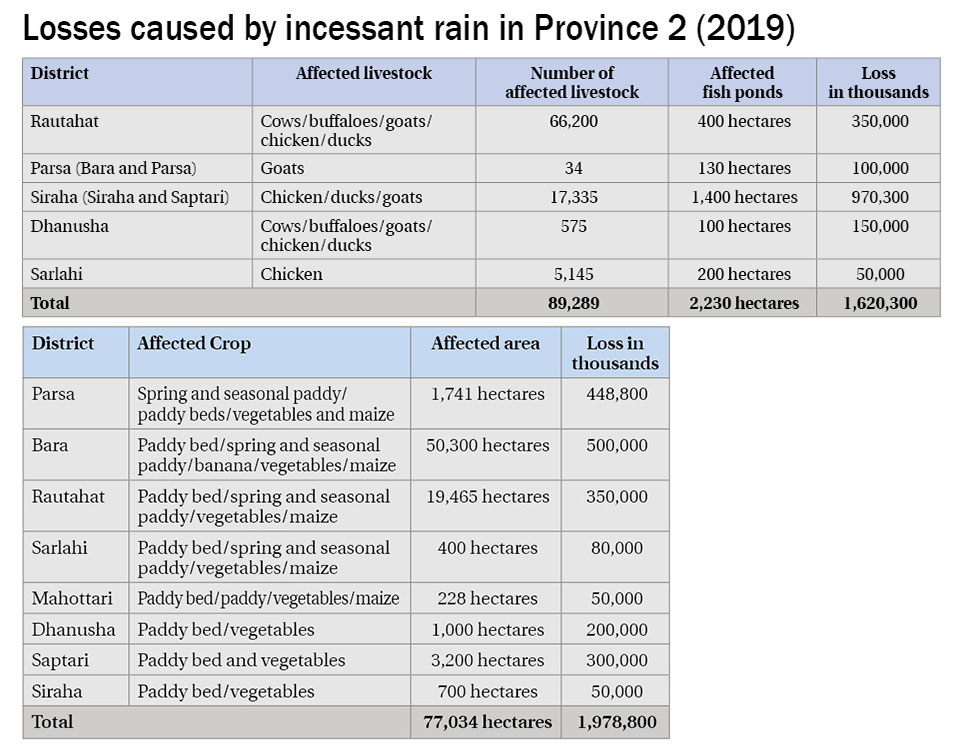 KATHMANDU, July 29: Floods and landslides triggered by heavy rains in the first week of July have caused Rs 3.59 billion worth of agricultural loss in Province 2, according to a report prepared by the Ministry of Agriculture and Livestock Development (MoALD).

Livestock loss was calculated at Rs 1.62 billion, while the province suffered crop loss of around Rs 1.97 billion, according to the report. A total of 89,289 heads of livestock perished in landslide and floods, while fish ponds spread over 2,230 hectares were damaged. Seven districts of the province – Rautahat, Parsa, Bara, Siraha, Saptari, Dhanusha and Sarlahi -- were affected by floods and landslides, according to the report.

Farmers lost cows, water buffaloes, goats, chickens and ducks, and fishes worth Rs 1.62 billion. According to the report, farmers of Siraha and Saptari suffered the most, losing 17,335 heads of livestock amounting to Rs 970.3 million, followed by Rautahat with loss of 66,200 heads of livestock worth Rs 350 million. Sarlahi suffered the least damage compared to other districts with poultry worth Rs 50 million destroyed. While farmers of Dhanusha lost ducks worth Rs 150 million in the floods, those in Parsa and Bara lost 34 goats, while fish ponds spread over 130 hectares was flooded causing loss of Rs 100 million.The floods destroyed paddy crop planted in spring season, paddy crop transplanted in monsoon season, maize, vegetables and banana plants.

According to the report prepared by MoALD, floods and landslides caused agricultural loss worth Rs 815.47 million in Province 1.

BIRGUNJ, Feb 24: The government of Province 2 has sought advice from experts to formulate new policies and revise existing ones... Read More...

Court directs Sharma to remove names of NRM publisher, editor and journalist from his controversial book
15 hours ago

NC will stay in opposition: Singh
18 hours ago