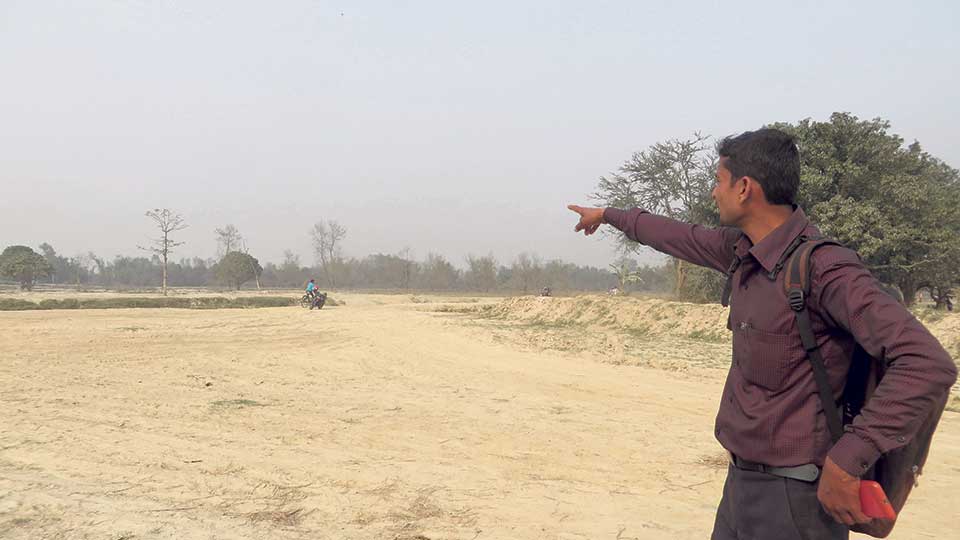 This recent picture shows a formerly arable stretch of land in Aurahi area, Siraha. It was rendered uncultivable after being inundated by Gagan Khola (rivulet). Photo: Mithilesh Yadav/Republica

LAHAN, Feb 7: Former President Ram Baran often shared his concerns for two issues. “I always worry about two things. One is implementation of the new constitution and second is the conservation of the Chure range,” he would say. While the country has made considerable progress towards implementing the new constitution and the federal setup, conservation of Chure range, remains a huge challenge.

During its first assembly on Sunday, parliamentarians of Province 2 discussed the issue Chure conservation seriously. Stating that the development and prosperity of the region largely depends on conservation the Chure range, they stressed on the need to take appropriate measures for its conservation.

“If we fail to conserve the Chure, agricultural sector, which is already suffering in the plains will be further affected. Our future depends on Chure, we must be serious about it,” they said.

According to a parliamentarian Suresh Mandal, enough harm has been done to Chure. If the jungles and the rivers in the region are not taken care of, people in the Madhes region will be affected by natural disasters in the near future, he opined.

“We don't need to explain the extent of damage done to the Chure range. Unchecked excavation and exploitation of natural resources and deforestation has affected the region seriously. This has affected the whole of population in the plains,” he said. “If we do not gear up to protect the range, we would be inviting natural disasters in the near future,” he added.

Agriculture is common occupation of people in the plains. Over the years, rivers and other water sources have gradually dried. Experts have blamed this to the massive deforestation and mining in the Chure region.

“If we respond to this crisis appropriately, Chure is going to the reason of our prosperity.  But if we fail to protect it, it will ruin our present as well our future,” Mandal stated.

Over 60 percent of the population in the province directly depends on Chure. Recognizing this fact, the leaders expressed commitment to make every effort to protect it.

For long, experts have warned that huge part of Tarai would be flooded if the Chure range is continued to be exploited. They have pointed to the massive deforestation in the region for the extreme weather conditions and massive floods in the parts. According to Mandal, more people are dying due to cold wave and by floods.

“Consequences of environmental degradation are apparent. It is high time that we are extremely serious about the matter and take immediate actions,” he stated.
This is the first time ever that Madhesi parties and leaders collectively stressed on the need to conserve Chure. In the past, despite reports of massive deforestation and mining in the range in the media, such concerns were not expressed by most of the political parties.

“It was not that we were unaware of its value, we were occupied by other pressing issues. Political issues got more of our attention. But now the responsibility has fallen in our shoulders, and we will shoulder it responsibly,” Mandal explained. “Saving Chure is the only way to prevent our region from becoming a desert,” he added.

We are going to introduce and implement appropriate plans and policies to conserve Chure region.

During the session, parliamentarians stressed on the need to launch massive awareness campaigns for conserving the Chure range. To keep forest mafias and poachers at bay, public awareness and support is important, they noted.

“If we can make this campaign successful, Chure will be able to regain its lost ecosystem balance. That will make our life better in many ways,” Mandal stated. “We are discussing plans to engage people in tree planting to mark major occasions and festivals. For instance, if we celebrate our birthday and similar other events by planting trees, we can make this region green once again,” he added.

Lal Babu Raut, another Member of Parliament, stated that Chure is going to be people’s common agenda now. “We are going to introduce and implement appropriate plans and policies to conserve Chure region,” he said.

Eight years ago, the then President Ram Baran Yadav had prioritized Chure conservation stating that the range also acts as the natural bonding between the people of hills and plains. Despite efforts made to conserve the region under several programs, its destruction continues to make headlines to these days.