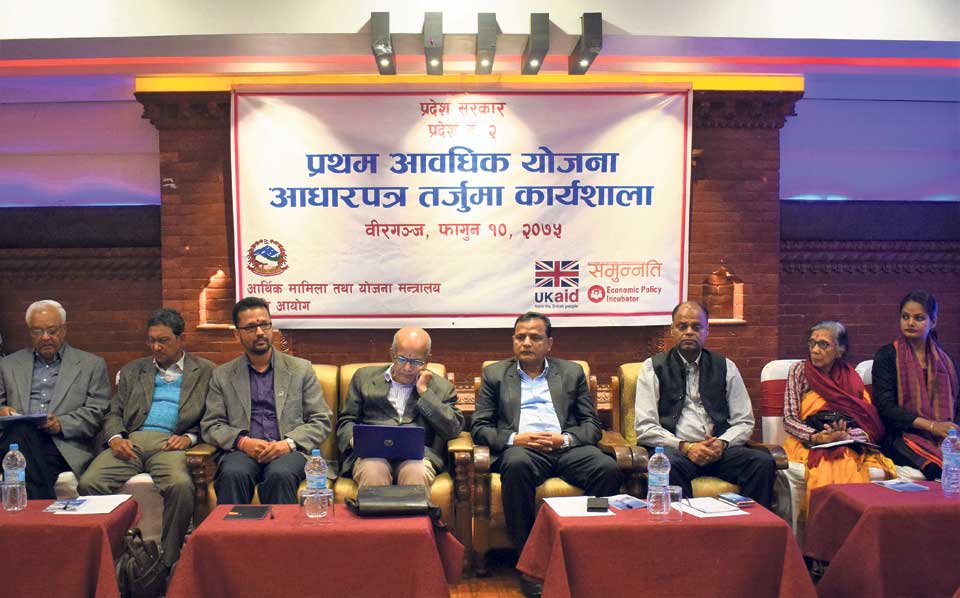 BIRGUNJ, Feb 24: The government of Province 2 has sought advice from experts to formulate new policies and revise existing ones related to key economic sectors.

The Ministry of Economic Affairs and Planning of the province organized a workshop in Birgunj on Friday where experts of different sectors were invited to give their inputs on policies related to industrial, agricultural, infrastructure development, and tourism sectors.

The participants said that such initiative would help the region achieve sustainable development and reach new heights of economic progress.

Chief Minister of Province 2 Mohammad Lalbabu Raut said: “This event has helped us to consider the valuable inputs given by experts and people actively working in different sectors to make concrete policies that will help define the work of various development programs and projects in the region.”

He added that the federal government was imposing its ways on the provincial and local level governments, making it difficult for the latter to work.

"The federal government acts like it controls the local and provincial government,” Raut said, adding that the bills filed at the provincial parliament reflect such over-exploitation of power.

The chief minister further pointed out that surveys and research were required to leverage the potential economic sectors that could help bring financial prosperity in the province.

He also highlighted the importance of developing policies, laws, and regulation at the provincial level that would contribute to the economic development of the province.

The experts suggested the government to focus on policies to develop Special Economic Zones (SEZ) and industries that capitalize on the raw material available in the region.

For agricultural development, the experts said that policies should be formulated to develop seed quality, control soil quality, and enhance mechanization of the sector.

They also suggested prioritizing development of roads that would be crucial to uplift other sectors.

Nepal’s trade deficit grew by around 25 percent to Rs 1.26 trillion in first 11 months of current FY
16 hours ago
As a Dalit girl is denied a room to rent, an int’l report highlights poor representation of Dalits in  state’s judicial, law enforcement agencies
10 hours ago