Province 1 home to over 30 species of rhododendron: Study 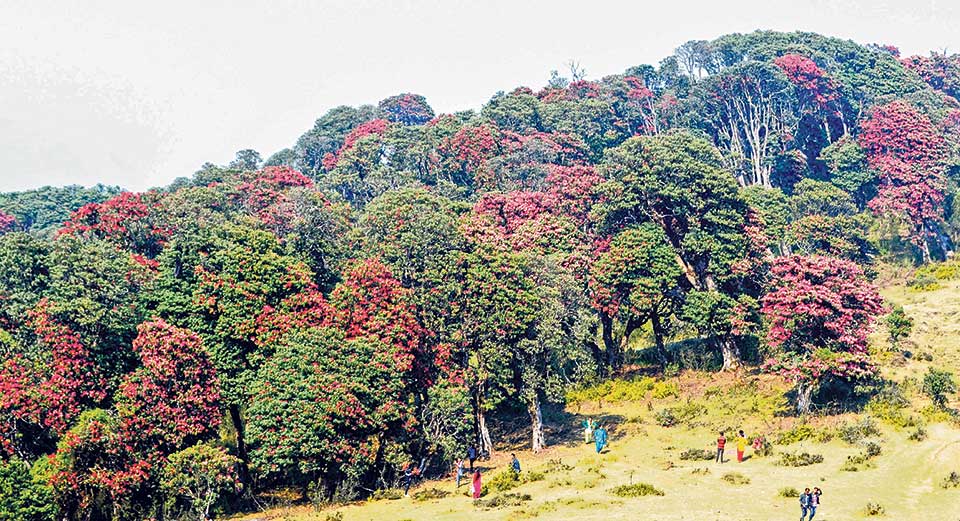 Rhododendrons in full bloom at a forest located on the boundary of Terhathum, Sankhuasabha and Taplejung districts in this file photo. Photo: Giriraj Baskota/Republica

PANCHTHAR, March 3: Home to over 30 species of rhododendrons decorating its landscapes, the hills in the eastern districts look mesmerizing these days. The colorful flowers have been attracting not only nature lovers but also religious enthusiasts and researchers. Similarly, the herbal benefits of the flowers have grabbed the attention of the Ayurvedic industries.

One does not have to travel a long distance to view all the varieties of the flower. Somewhere thick and at some places thinly scattered species of these flowers are found in close distance. During the Nepali months of Chaitra and Baishakh (March - April), these flowers bloom to the fullest.

In Province 1, the flowers are found most abundantly in Taplejung, Terhathum, Sankhuwasabha, Panchthar, and Ilam districts. According to experts, Nepal is home to 33 species of rhododendron and 31 of these are found in Province 1 alone.

A recently released book called ‘Kanchenjunga and the Rhododendrons Around’ sheds light on the flowers. The researchers for this were Dr Upreti, Dr Ram Chandra Poudel, Hemraj Acharya, Yogesh Dhakal and Rajan KC, and has been reviewed by Sagar Kumar Rimal, Dr Keshabraj Bhandari, Kamal Maden and Bishnu Prasad Shrestha. The research project was supported by the Ministry of Forest and Environment, the Department of National Park and Wildlife Conservation and the Office of the Kanchenjunga Conservation Area.

“Most of the types of rhododendron are seen in this season. But some species of this flower bloom in other seasons as well,” noted Upreti. “We can consider rhododendron to be the identity of this province as well,” he added.

According to Upreti, though the rhododendrons are found in different colors, the most distinguished colors are red, maroon, white, yellow and pink. “Those are the most commonly found species of the flower and they cover huge swathes of land.”

“Identifying the flowers would not be possible without literature review, field visit, sampling, and locals’ valuable contributions. We discussed a lot with the locals on the flowers to know more about them,” said Upreti while elaborating on the way the research was conducted.

Rhododendron cannot be found 1000 meters above the sea level. The higher the altitude, the greater are the chances of its survival. At Kanchenjunga Conservation Area, rhododendrons are widely found in Pathibhara temple zone, Gyabl, Fale, Ghunsa, Olangchungola, Cheram, Selele, Khambachen and Falema. Similarly, Tinjure, Milke, and Jarjare are also quite famous for different types of rhododendron.

In Panchthar district, Pauwabhanjyang, Jorpokhari, Chyangthapu area have dense forests of the flowers. Maipokhari of Ilam also offer those flowers in plenty. According to studies, there are jungles of mixed types of rhododendrons in Ilam and Panchthar. Similarly, there are many varieties of rhododendron in Barun National Park.

“The flowers are used for several purposes including to make liquor. People make liquor of rhododendron, some make pickle out of it,” said Upreti, adding that the flower also are used for making herbal medicines. “Many people, companies come here to pick the flowers for their medicinal value.”

According to Upreti, in the view of the wide variety of rhododendron in the east, single research is not sufficient to cover all aspects of the flower.  To get adequate details about the flower, more researches must be conducted. “It calls for far more attention. This is a very rich natural resource of the country and we must know how to conserve it, utilize it for best results. It is important to protect the jungles from mafias,” he said.

BIRATNAGAR, Aug 13: Province 1 has reported the highest single-day spike as 115 more people were diagnosed with the novel... Read More...