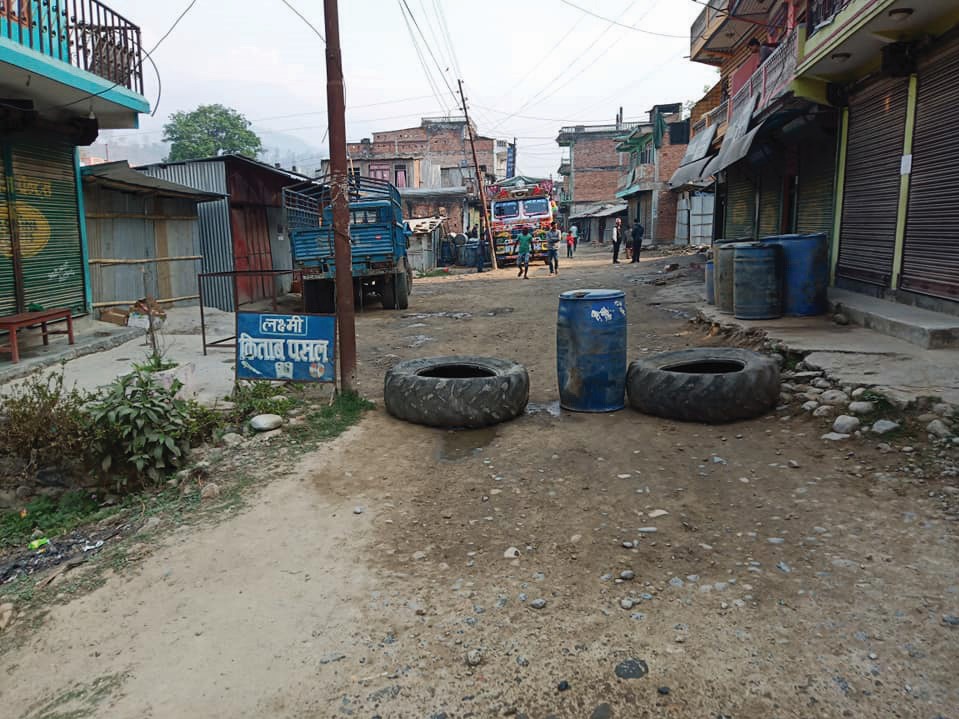 Republica Shops and road in Arughat Bazar of Dhading district were closed on Monday.

ARUGHAT, March 19: Stakeholders took to the streets and obstructed the Kathmandu-Benighat-Gorkha road on Monday to protest against the delays done by the Budhi Gandaki Hydropower Project in determining rates of land that the project will be acquiring in Arughat, Khahare, and Arkhet area.

The project's water reservoir is expected to inundate landmass in these and other areas of the district when it comes into operation. However, residents in some of these areas claim that the project authorities have not yet informed the rates at which the project will acquire their land.During the protest on Monday, protestors shut down Arughat Bajar located on the border of Dhading and Gorkha districts affecting normal activities in the town. They obstructed the highway using stones, tree trunks, and tires and blocked vehicular movement along the road.

As the protestors did not let vehicles pass through the highway, passengers heading to and fro Kathmandu – Benighat – Gorkha, etc were stranded for hours. Locals also of Dhawa, Tandrang, Borlang Namjung, Fujel, and Ghyampeshal, among other areas in the district were severely affected by the obstruction as they depend on public buses that leave from Arughat station.

Dinesh Kumar Dhakal, the coordinator of Budhi Gandaki Hydro Power Project National Concern Committee, accused the government of turning a deaf ear to the concerns of the people that are affected by the project. "Such negligent attitude of the government will not do good for any - neither for the affected nor for the government."

“We have been trying everything possible to draw the attention of the authorities concerned to our problems so that we could sit together and resolve it without delaying it. But they don't care. We even went to Kathmandu to discuss the delays done in determining the compensation rate for our land, but they did not come forward to hold a meaningful discussion,” Dhakal said.

Dhakal said that in lack of information of the amount they will receive, locals have been unable to plan their migration to other areas. “For instance, if I know how much amount I am going to get as compensation for my land, I will plan my family's move accordingly. It will also help me to plan the construction and budget of my new home. But when you don't know, how much you will get, how can you plan?”

The project has provided compensation in some of the areas and in some areas it has fixed price rates at which it will acquire the land. But the project is yet to announce the rates in Arughat and surrounding areas. Residents say that the prolonged delay is a grave injustice towards them.

The project has provided compensation in some of the areas and in some areas it has fixed price rates at which it will acquire the land. But the project is yet to announce the rates in Arughat and surrounding areas. Residents say that the prolonged delay is a grave injustice towards them.

“In other areas, the affected have already received compensation. Many might have already spent it. But in our area, we even don't know how much the project will pay us for our land. Isn't it a grave injustice?" Dhakal asked.

Jagannath Khanal, the committee's coordinator for Gorkha district, said that the uncertainty has been affecting the day-to-day life of the people along with their family's future.

“When you don't know the value of your property, how can you plan? Due to this hydro project, we are going to be homeless, and we have to leave this place. But then we don't know where and how will we resettle,” said Khanal.

“Due to this cloud of uncertainty, we are not able to plan education and future of our children. Prolonging this confusion will further affect our family's present and future,” he added.

Before Monday's shutdown, the affected have organized such protest programs even in the past. Due to the hydro project, the transaction of real estate has come to a standstill in Salang, Maidi, Chainpur, Bishalnagar, Khahare, Arughat, and other areas that will be affected by the project.

The protestors also demanded that the government should ascertain rates that it will provide for the trees and sheds of cattle after it ascertains the prices of land.

“The project should first ascertain the price it will pay fto acquire our land. But it is trying to fix the price it will pay for our trees and sheds. They cannot determine prices of assets appropriately if they do it hapahazardly,” said a local of Arughat, Gopal Shrestha, adding that the government should act 'maturely.'

Around 27 village development committees in Dhading and Gorkha are going to be affected by the project. Chief of Resettlement Unit of the project, Krishna Bahadur Karki, informed that preparations for fixing compensation rates for the remaining areas are in their final stages.

“We are in the final stage of finalizing price rates for acquiring land in the remaining area. We expect this to conclude very soon,” he claimed. He added that fixing the rate at the market area was challenging. “It took longer than expected as we had to consider various aspects while determining the price for land in a particular area.”

KATHMANDU, May 28: After initially showing lack of direction in the first half of Monday's trading session, the benchmark Nepal Stock... Read More...