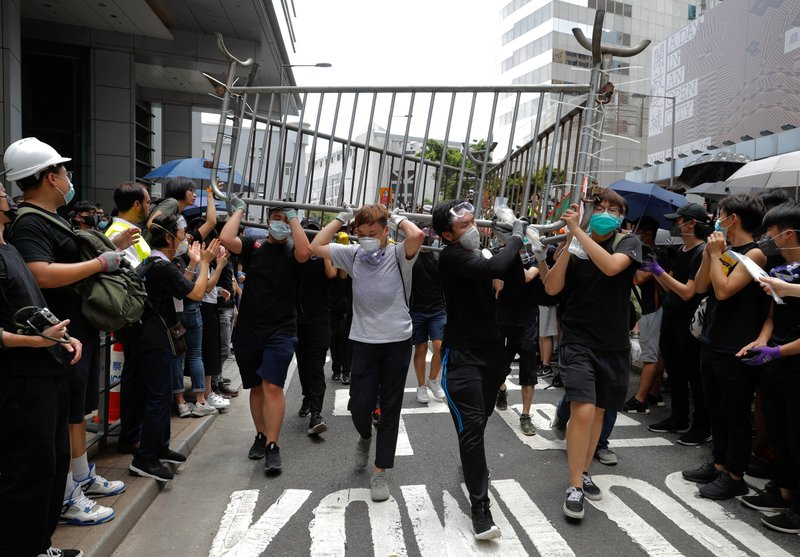 Protesters carry barricades to surround the police headquarters in Hong Kong on Friday, June 21, 2019. Several hundred mainly student protesters gathered outside Hong Kong government offices Friday morning, with some blocking traffic on a major thoroughfare, after a deadline passed for meeting their demands related to controversial extradition legislation that many see as eroding the territory's judicial independence. (AP Photo/Vincent Yu)

HONG KONG, June 21: Several hundred mainly student protesters gathered outside Hong Kong government offices Friday morning, with some blocking traffic on a major thoroughfare, after a deadline passed for meeting their demands related to controversial extradition legislation that many see as eroding the territory’s judicial independence.

While the scene began peacefully, the presence again of protesters on busy Harcourt Road could prompt a renewed police action to clear them — and new potentially violent confrontations.

Protest leaders have said they are determined to keep up the pressure on the administration of territory leader Carrie Lam, potentially renewing demonstrations that have drawn hundreds of thousands into the streets in recent weeks.

“I myself am not the type to get involved in violence,” said student protester Brian Chow. “I’ll just carry on sitting here, sing some Christian hymns, show our resistance, and keep the government paralyzed until it responds to us.”

Another student, who would only give her first name, Yvonne, said she was determined to keep the movement’s momentum.

“I’m going to carry on coming out, and carry on protesting,” she said.

Many protesters have been wary of giving their full names and some have obscured their features with facemasks as a means of guarding their identities against potential retribution from government or school authorities.

Government offices were ordered closed Friday “due to security considerations.”

After the earlier protests that were the largest and angriest in Hong Kong in years, Lam apologized and agreed to shelve the legislation, but she stopped short of scrapping it altogether.

Critics say the bill allowing extraditions to mainland China and other places is part of a campaign by Beijing to chip away at the semi-autonomous region’s democratic institutions.

Other demands by activist groups include investigating police tactics used against the protesters, cease calling the protests a riot, and dropping charges against those arrested. Many are also calling for Lam’s resignation, although others say that is immaterial since her replacement would be unlikely to change tack.

Outrage remains high over heavy-handed police tactics used against protesters June 12, including the firing of 150 rounds of tear gas, rubber bullets and beanbag rounds, and the beating of unarmed protesters by police with truncheons. Lawmakers and others have also complained that riot police wore no identification numbers on their uniforms, making it that much more difficult to file formal complaints.

Police have since eased their approach, hoping to avoid a replay of the events of September 2014, when officers unleashed 87 rounds of tear gas at protesters who had amassed in the same location as the current protesters. When the smoke from that response cleared, bigger crowds returned, angrier than before, and didn’t leave for nearly three months.

Hong Kong legal and business groups are also among those opposing the extradition bill, saying critics of China’s ruling Communist Party would be at risk of torture and unfair trials on the mainland and it further chips away at the “one country, two systems” framework under which Hong Kong has been governed since 1997.

That framework guaranteed the territory the right to retain its own legal, economic and political system for 50 years, but the Communist Party under Chinese President Xi Jinping has been pushing ever-more aggressively to quiet independent voices in Hong Kong. Beijing has squelched all reporting on the protests in mainland media and accused foreign forces of stirring up disturbances in Hong Kong.

Lam has insisted the legislation is needed for Hong Kong to uphold justice and not become a magnet for fugitives. It would expand the scope of criminal suspect transfers to include mainland China, Taiwan and Macau.

Nepse ekes out marginal gains in volatile trading
2 hours ago

Sorry we made you cry, Napoli captain tells young fan
17 hours ago