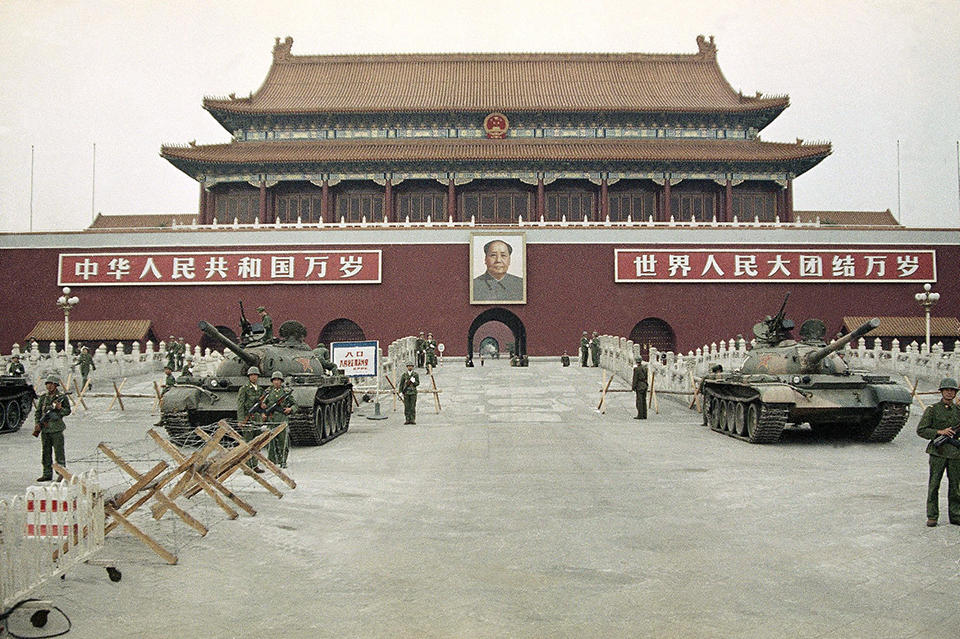 BEIJING, June 3: Thirty years since the Tiananmen Square protests, China’s economy has catapulted up the world rankings, yet political repression is harsher than ever.

Hundreds of thousands of Muslims are held in re-education camps without charge, student activists face relentless harassment and leaders in the beleaguered dissident community have been locked up or simply vanished.

Religious groups face ever greater pressure to conform, and a web of mass surveillance is bolstering a system many call totalitarian. It’s a far cry from the hopes of the idealistic student demonstrators, and a level of control far beyond what many imagined possible, even after the army’s bloody crushing of the protests on the night of June 3-4, 1989.

Critics say the Tiananmen crackdown, which left hundreds, possibly thousands, dead, set the ruling Communist Party on its present course of ruthless suppression, summary incarceration and the frequent use of violence against opponents in the name of “stability maintenance.”

“The June 4 incident changed the direction of Chinese history,” said Zhang Lifan, who in 1989 was a scholar at the Chinese Academy of Social Sciences. “The narrative that China would grow strong and normal, become a stable country through a process of political reform, was destroyed.”

Chinese officials routinely respond to questions about the suppression by pointing to the economic progress China has made. In the three decades since the protests, China has risen to become the world’s second-largest economy and is forging ahead in areas from high-speed rail to artificial intelligence and 5G mobile communications.

China’s navy now sails around the globe, its space program has launched half a dozen crewed missions and its sprawling cross-border infrastructure projects are extending its influence from Nairobi to the Netherlands.

Politically, however, the state has never been more repressive. Restrictions on freedom of speech have been extended from publishing into social media, and the slightest act of perceived defiance can prompt a near instantaneous response from the authorities. The sprawling domestic security apparatus operates with impunity, coerced confessions are broadcast on state television and prison sentences are handed out on the flimsiest of charges, including “picking quarrels” and “incitement to subversion.”

Calls for even moderate reforms have been attacked or just ignored. An attempt to introduce grass-roots democracy at the village level years ago foundered after the Communist Party refused to concede even a modicum of control. Deliberative bodies at all levels are filled with party appointees who vote how they’re told, and the national legislature is a mere rubber stamp body, re-electing president and party head Xi Jinping last year by a margin of 2,970 to 0.

Regarded as China’s most powerful leader in a generation, Xi took the opportunity to amend the constitution and remove presidential term limits, making him president-for-life if he so chooses. While the party is believed to be rife with power struggles, Xi’s ongoing anti-corruption campaign and the threat of heavy prison sentences keep his opponents in check.

In the wake of the Tiananmen crackdown, efforts to supervise the party’s workings and control corruption through the media and public oversight were lost, Zhang said. While it ushered in the era of new party leader Jiang Zemin under which the economy grew, graft also became endemic, faith in communism was exhausted and interpersonal relationships revolved around sheer personal gain, essentially finishing off what the violent, radical Cultural Revolution had begun almost 20 years earlier, he said.

“The moment the government ordered its army to fire on its own people, it lost its legitimacy,” said Rowena Xiaoqing He, a former protester who created a course on Tiananmen at Harvard and is a current member of the Institute for Advanced Study at Princeton.

“Of course, those in power can easily manipulate history and twist our memory. But that kind of manipulation and suppression of history is always followed by distortions of all kinds — social, political, psychological,” He said. “It is indeed impossible to understand today’s China without understanding the spring of 1989.”

Speaking at a regional defense forum in Singapore on Sunday, Chinese Defense Minister Wei Fenghe defended the government’s response to the protests, drawing the stock link to China’s post-1989 development.

“How can we say that China didn’t handle that Tiananmen incident appropriately? There is a conclusion of that incident, that incident was political turbulence and the central government took measures to stop the turbulence, which is a correct policy,” Feng said.

An editorial Monday in the official Communist Party newspaper Global Times’ English edition said the 1989 “riot” had “immunized China against turmoil” and blamed veteran student leaders and foreign politicians of using the anniversary to attack China. The editorial made no mention of the military crackdown or subsequent repression.

Given that unbending official line, hopes for a re-evaluation of the crushing of the 1989 protests seem incredibly distant, despite the lack of any direct personal connection to that decision among the current ranks of leaders. Revisiting the episode, meanwhile, could undermine party prestige and authority among a younger generation who know only relative prosperity and little or nothing of the events of 1989.

While China has sought to rally the public with appeals to patriotism and the ideals of the communist revolution that swept the Communist Party to power in 1949, their belief system seems hollow at the core.

In an ironic twist, the Communist Party seems truly disconcerted by young people who remain true believers in Marxism for China.

A harsh crackdown on members of the Marxist student society at prestigious Peking University is one of the most extreme examples of the regime’s insecurity and willingness to trample basic human rights. The school, whose Communist Party secretary — its top leader — was recently replaced by a former head of the national spy agency’s branch in Beijing, has stood by as security agents have beaten, harassed and forcibly removed students who joined in the club’s activities, including seeking solidarity with workers by joining them on the assembly line.

“I think the government has been very concerned about another round of student activists staging mass demonstrations. That’s why they are being so nervous about students getting involved in protest,” said Patrick Poon, China researcher for Amnesty International in Hong Kong.

China’s domestic security spending now outstrips its defense budget, constituting an ever-growing strain on finances as the economy slows — from double digits to just 6.6% last year, a three-decade low. In addition, 20% of the defense budget is spent on the People’s Armed Police, the internal security force.

Yet more initiatives are in the works, in particular the “social credit” system of mass date collection that monitors every citizen’s digital, economic and social behavior and can limit access to everything from job offers to train tickets. Still, China ranks far down in global rankings for political stability and absence of violence, below countries such as Sri Lanka, Greece and Moldova in 2017. Numbers of protests listed as “mass incidents” run into the tens of thousands each year.

With the party having shut off all channels for organized opposition or even calls for inner-party reform, Zhang, the scholar, says he sees only two scenarios under which China might be able to “overturn the verdict” on Tiananmen. One would be during a time of supreme economic and political confidence, offering a chance to “pay off this historical debt,” he said. The other would be in the case of an existential crisis, when the regime was “grasping at straws.”

The opportunity for the first option has already passed because of constant infighting for political influence and the economy on decline, partly because of the trade war with the U.S., Zhang said. The second scenario “has yet to come to pass.”

Despite the setback it dealt to Chinese political reform, the crackdown may have had a salutary effect on events elsewhere, hurrying the peaceful fall of the Berlin Wall the same year and the dissolution of the Soviet Union soon after, Zhang said.

“So even though the Chinese people didn’t benefit from it, the rest of the world felt the impact,” he said.