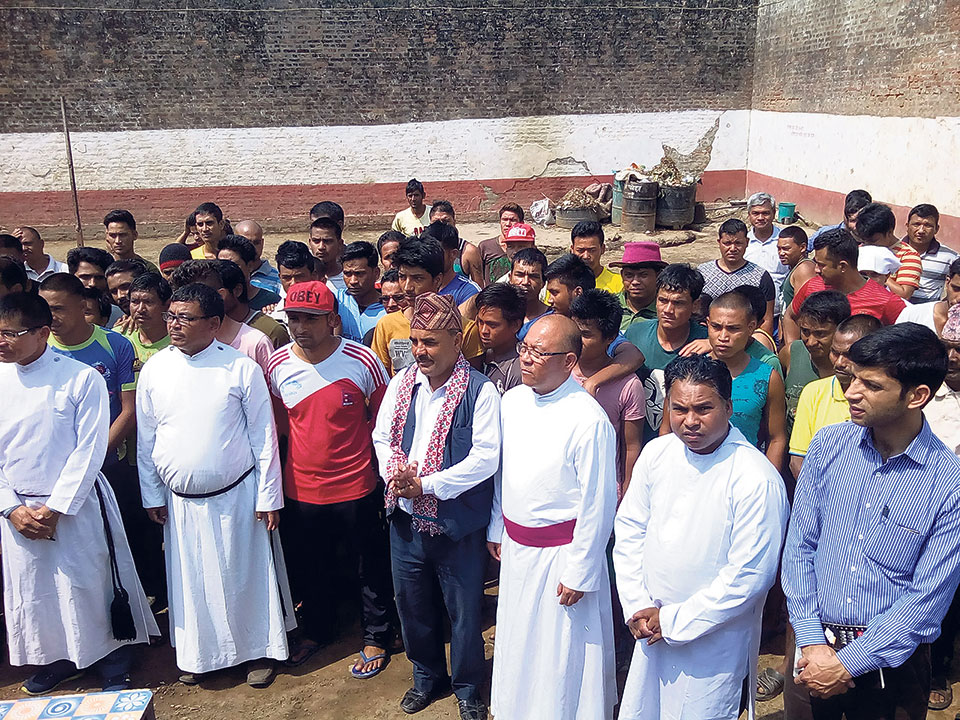 The clergy of Believers’ Church, Pokhara along with followers at the district prison in Surkhet in this recent photo.

SURKHET, May 10: Six years ago, a few Christians from Anugraha Church at Birendranagar Municipality-1 reached the District Prison Surkhet to extend their helping hands . Though they had gone there for providing some food to the prisoners, they have since used the prison as a center for promoting Christianity. They have been successful in doing so and have added hundreds of followers.

Nowadays, when the inmates fall ill, the jail administration calls in the pastor to conduct prayers for them instead of taking them to hospital.Jail authorities allow the pastors of various churches based in Kathmandu and Pokhara to conduct skill training, construct infrastructure, set up libraries and extend various other help. Stating that help and love can change lives , they instruct the inmates to observe prayers.

They also reach out to the families of the inmates with the Christian teaching.It's been six years since Manoj Pulami, pastor of Anugraha Church, has been promoting Christianity in the district prison. "We are trying to change the lives of the inmates by spreading the message of God," said Pulami, adding," Now, most of the inmates remember Christ during good times and bad ."

Anugraha Church has been providing donations and other help to the prison in coordination with various other churches. "We have constructed a waiting room, a library, a tank for storing drinking water and other facilities and we also conduct training programs and health camps," said Pastor Pulami.

Even the jail administration is co-operating with the Christians in spreading Christianity. According to jailor Lal Bahadur Khatri, Christian leaders visit the jail administration every Sunday and involve the inmates in prayers. There are separate blocks for male and female prisoners. While the male inmates are taught by male followers, the females are taught by female followers. Many inmates embrace Christianity in expectations of material help. "The government cannot fulfill our requirement. But they have been playing the role of the government for us and we just can't let them return empty-handed," said Nawaraj Devkota, a prison leader.

According to jailor Khatri, the Christain leaders are allowed to enter the prison as they help fulfill the necessities of the inmates. "We have been allowing their entry as per the directions of the Prison Management Department," he said . As the library has been put together with the investment of the churches, most of the books there are related to Christianity.

The Christianity promoters have been providing food and free education as well. Accordng to Pastor Pulami, they have provided scholarships to 38 children of the inmates.

Caption: Purna Bardeba, pastor of Believers Church, Pokhara along with followers in the district prison at Surkhet.

Stability, rule of law, accountability and good governance can be maintained only through honest individuals in and outside the government. Read More...

KATHMANDU, Jan 19: A parliamentary panel is close to finalizing a bill on sentencing, which envisions an open jail system for... Read More...