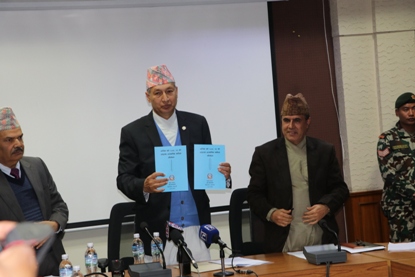 KATHMANDU, March 6: If the proverb ‘morning shows the day’ is anything to go by, Nepal’s economic performance will remain average over next four years as there was no sign of improvement in key economic indicators over the first year of the incumbent government.

Agricultural output, which the finance minister aimed to double in five years, has not shown any indication of growth, while imports of major crops have seen a whopping growth over the past year.

Expediting development spending was one of the key announcements of the present government. But the performance in this front is not better than past governments. The government has managed to spend only Rs 55 billion, or 17 percent, of Rs 313 billion allocated for development works in the first half of the current fiscal year.

Minister for Finance Yuba Raj Khatiwada brought down spending target to Rs 265 billion (84 percent) in the mid-term review of monetary policy. Such revisions would hover between 80 to 85 percent in recent past years.

Overall budget spending in the review period remained at 28 percent.

“We had expected to spend 35 percent of the total allocation. But it did not materialize,” Minister Khatiwada said.

Many had welcomed the decision to appoint Khatiwada, a seasoned economist, to the top post at the finance ministry ahead of several aspirants in the ruling Communist Party of Nepal (CPN).

Delaying payments has remained one of the key problems of the government agencies. It not only affects project execution, but also creates liquidity crunch in the financial system.

“We have received a lot of complaints on this front. We are trying to address this,” Minister Khatiwada said. He also expressed disappointment over slow work progress in other ministries.

“We have completed political transition. But it seems that our economy is still in transitional phase,” said Khatiwada who has drawn ire from ruling party leaders for not increasing allowance provide to senior citizens as promised in the party’s election manifesto. Many criticize him for stopping budget allocation for petty projects.

Khatiwada, who is also a former vice-chairman of the National Planning Commission and former governor of Nepal Rastra Bank, is still hopeful that Economic Procedure and Fiscal Responsibility Bill  2075 BS, will bring positive changes. Among others, the bill aims at curb anomalies like delaying payment of completed works and stopping budget allocations for unprepared projects.

The finance minister also blamed the delay in endorsement of some key laws as one of the factors that affected economic performance of the government.

During the first half of FY2018/19, revenue grew by 26 percent to Rs 402 billion. The minister terms it satisfactory. “We could have collected more by allowing traders to import more. But we chose not to deplete our foreign currency reserve further,” added Khatiwada.

He showed 24 percent credit growth to productive sector and 42 percent rise in import of industrial raw materials and equipment as some positive indicators of the economy which, he believes, will grow in range of 7 to 8 percent.

Minister Khatiwada, however, didn’t give any hint of controlling spiraling lending rates which has sapped confidence of investors. He also didn’t talk about imports which are increasing by leaps and bounds, and drop in foreign direct investments compared to the previous fiscal year.

Foreign Direct Investment slipped by 69.6 percent to Rs 4.36 billion over the first half of FY2018/19 compared to review period of FY2017/18. Minister Khatiwada, however, claimed that investment pledge has increased while registration of companies and firms has witnessed a growth of 25 percent.

Asked why the government is not doing anything to contain spiraling lending rates, Khatiwada said that he has to balance between inflation, interest rate and growth rate. “I can not intervene into everything going beyond the principles of economics,” he added.

UML Chair Oli contracts COVID-19
57 minutes ago
Moderate snowfall, rain predicted in most parts of Nepal till Monday
1 hour ago