Promises of federalism fail to woo the poor 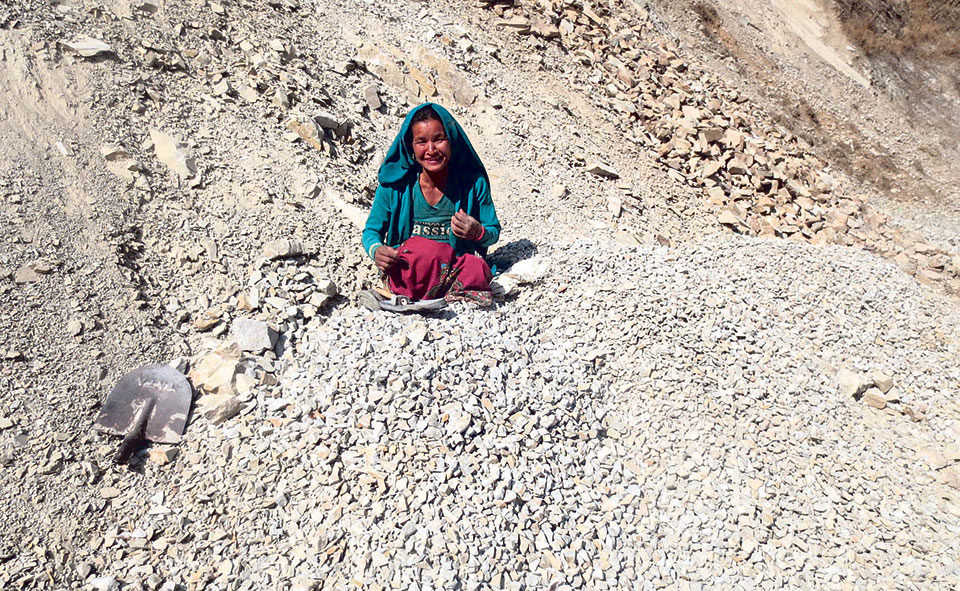 ROLPA, Feb 5: People in towns and villages have felt sheer changes in their day-to-day life following the implementation of federalism across the nation. Land prices have skyrocketed; tea shops, hotels, eateries have been doing brisk business. The change in governing order has touched almost everyone even in the remote areas like Rolpa.

However, not everyone is happy about it. For people under the poverty line, the change has neither brought joy nor hope. For them, they feel, their miseries will remain as they have been.

“We are not happy. Tell me, why should we be happy? We see no point,” stated Asmita Gharti. “In fact, we have little idea about federalism. We do not what it means and what it will do,” she added.

Though Gharti is just 42 and she is already a grandmother. Child marriage is rampant in her village, Putlakhola. She was one of those who got married when she was just 14. Soon after that, she gave birth to children, one after another.

“That is how life goes on here in the villages. After having children, we have to work harder, to feed them. We work and work. But despite all that, we always remain poor,” she said.

She used to work for some local landlord in the past. However, she considers that too as a matter of luck. Not all the poor people in her village get to work for rich people. “There are few rich people in village. Most are just like us,” she said.

Even though they are poor, community members like Gharti follow strict social norms, values, cultures. This makes their life even pathetic. Garti's family had to spend huge sum of money during the weddings of her sons, one of whom now works in Qatar. Her family had to get loan to send him to overseas.

“During marriage, we have to follow certain cultural and social norms. We had to spend money, even though we didn't have much. And when he decided to go abroad, we had again seek loan for it,” Gharti lamented.

The mother of three sons and one daughter somehow managed to a loan of Rs 2 million from many people. Her son had to pay hefty amount of commission to the foreign employment agent. And some of that money was even given to government officials, she says. Ultimately, when he landed in Qatar, he was penniless, she said.

When she took loan from the villagers, she expected to pay it off very soon. But even after two years her son has not sent any remittance home and this has put her in trouble.

“I have a huge family to look after. With the grandchildren, daughter-in-laws our family has become huge. It is hard to feed them let alone send them to school and bear the cost of their education,” Garti lamented. “I work just like when I was very young. I don't know how long I will be able to support them like this,” she wonders.

Gharti crushes stones at a local construction throughout the day. Even though he hand swells because of freezing cold, she says she cannot rest because she has to feed the family. “If I take rest, I won't be paid. To feed the family, I have to keep working, nonstop,” she narrated.

Recently I have been seeing new people around the village who talk about federalism and new government. But I don't understand what it means. We were poor yesterday and we remain poor today also.

If she would have been able to educate her children, may be her family would have different future today, she wondered. But, that too, was not possible due to extreme poverty, she said. Even after a generation, she says, her family is equally poor and unable to send the little ones to school.

“So this speaks for our unchanging fate. If my son had sent money home, may be these children would be able to go to school. Recently I have been seeing new people around the village who talk about federalism and new government. But I don't understand what it means. We were poor yesterday and we remain poor today also,” Garti said. She added that she would be happy if the new government would take care of the education of her grandchildren.
She earned Rs 16,000 last month by crushing stones. That sounds like huge amount but after spending for essentials, nothing is left, she says.

“Because of our family expenses, we are never able to save money. In case of medical need, we have to borrow money from others to visit hospital. Had we been more skilled or educated, maybe we could also have better life then this,” Gharti said.
She said that her family members fall sick very often- mostly during the monsoon and winter season. Visits to hospital during this illness, cost the family a fortune, she says.

Gharti is just one among dozens of daily wage earners seen around the roads and construction sites in Rolpa who see no ray of hope of better tomorrow even amid the new federal set up. Neither do they have detailed knowledge of the changing political scenario nor do they are keen to understand. According to Gharti, 'nothing will change the fate of the poor people'.

BUTWAL, Nov 29: During the second Constituent Assembly election four years ago, Baburam Bhattarai, who was a candidate from the CPN... Read More...