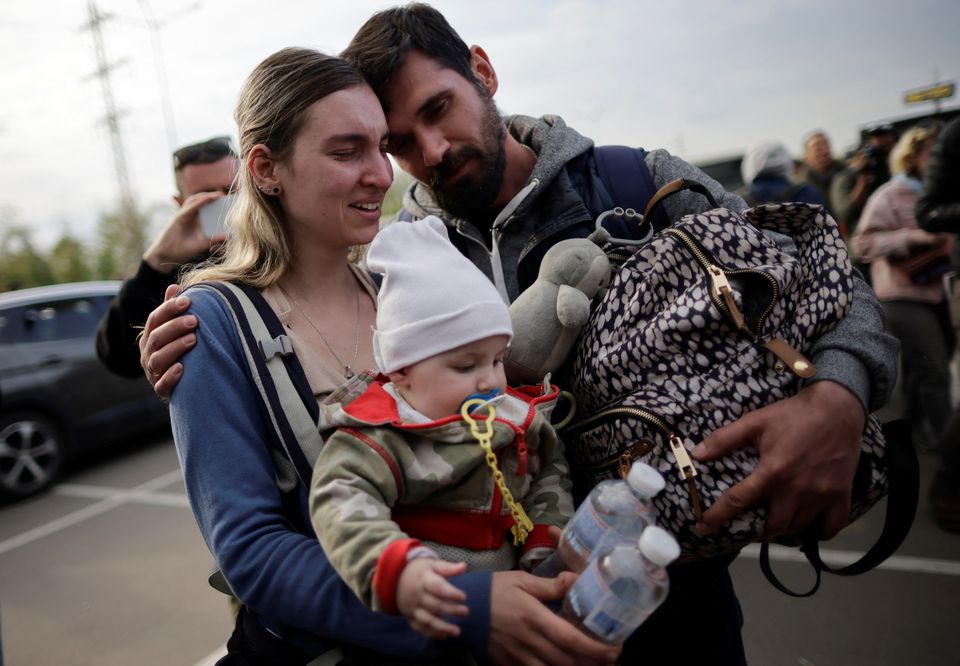 KYIV, May 5: Civilians including women and children are still trapped inside Ukraine's besieged city of Mariupol and a prolonged ceasefire is needed to ensure their evacuation as Russia presses its assault, Ukrainian President Volodymyr Zelenskiy said on Thursday.

After failing to capture the capital Kyiv in the early weeks of a war that has killed thousands and flattened cities, Russia has accelerated attacks on Ukraine's east and south, where the Azov Sea port of Mariupol is among its main targets.

Russia declared victory over Mariupol on April 21 after weeks of siege and shelling. The city is key to Moscow's efforts to cut Ukraine off from the Black Sea - vital for grain and metals exports - and link Russian-controlled territory.

The United Nations and Red Cross evacuated hundreds of people from Mariupol and other areas this week. But some 200 civilians, as well as Ukrainian fighters, are still holed up in a network of underground bunkers in Mariupol's Azovstal steel plant, Ukrainian officials say.

Russia vowed to pause military activity at Azovstal during Thursday daytime and the following two days to allow civilians to get out. In an early morning address, Zelenskiy said Ukraine stood ready to ensure a ceasefire in Mariupol.

"It will take time simply to lift people out of those basements, out of those underground shelters. In the present conditions, we can not use heavy equipment to clear the rubble away. It all has to be done by hand," Zelenskiy said.

Over 300 civilians were evacuated on Wednesday from Mariupol and other areas in southern Ukraine as part of a joint U.N.-Red Cross operation, U.N. humanitarian coordinator for Ukraine Osnat Lubrani said.

"While this second evacuation of civilians from areas in Mariupol and beyond is significant, much more must be done to make sure all civilians caught up in fighting can leave, in the direction they wish," Lubrani said.

It was not clear if further U.N. evacuations were planned. Tetyana Trotsak, a Ukrainian evacuee who was among dozens who reached a Ukraine-controlled town this week, voiced fear for those still trapped inside the steel plant.

"God forbid more shells hit near the bunkers where the civilians are," Trotsak said.

Russia launched its invasion on Feb. 24, describing it as a "special military operation" to disarm Ukraine and defend its Russian-speaking population from fascists.

Kyiv and its Western supporters say that is a pretext for an unprovoked war of aggression by President Vladimir Putin that has driven more than 5 million Ukrainians to flee abroad.

The Pentagon and the White House did not immediately respond to Reuters' requests for comment on the report.

Ukrainian officials said they have killed about 12 Russian generals on the battlefield, according to the New York Times.

Russian forces have carried out sporadic attacks on Kyiv and Lviv in western Ukraine, near the Polish border, since pulling back from areas around the capital in early April.

Moscow's main focus is capturing Ukraine's eastern Donbas region, made up of two provinces - Luhansk and Donetsk - that are under partial control by Russian-backed separatists.

Reuters could not immediately verify reports of battlefield developments.

The United States and its European allies have placed sweeping sanctions on Moscow over the invasion and provided Ukraine with billions of dollars worth of aid, including weapons that Kyiv says have led to heavy Russian losses.

Piling pressure on Russia's already battered $1.8 trillion economy, the European Union on Wednesday proposed phasing out imports of Russian crude oil within six months and refined products by the end of this year. read more

The plan, if agreed by all 27 EU governments, would follow U.S. and British oil bans and be a watershed for the world's largest trading bloc, which remains dependent on Russian energy and must find alternative supplies.

A source said EU envoys could reach a deal on Thursday or later this week on the plan, which also targets Russia's top bank, its broadcasters, and hundreds of individuals.

The Kremlin said Russia was weighing various responses to the EU plan, adding that the measures would be costly for European citizens.

KYIV, Ukraine, April 18: Ukrainian fighters who were holed up in a massive steel plant in the last known pocket... Read More...

Corruption control is a challenge: PM
8 hours ago