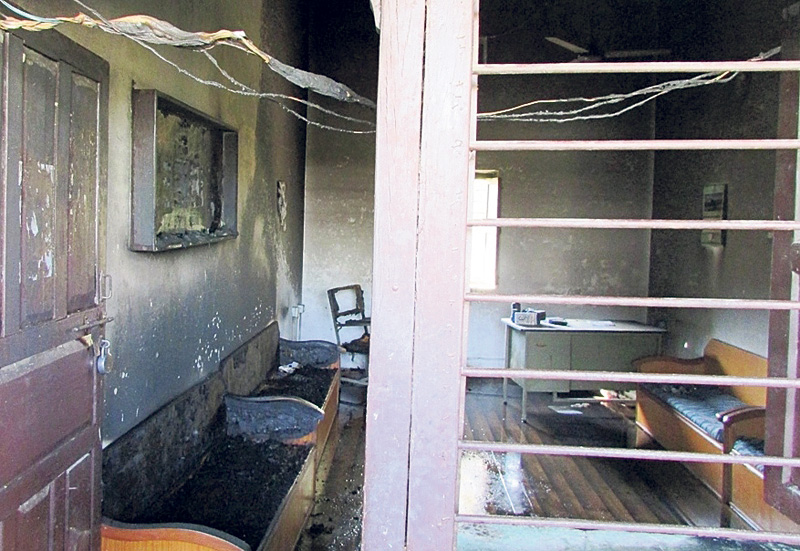 The office of the assistant chief of Thakur ram Multiple College after the arson. Photo: Ritesh/Republica

BIRGUNJ, Feb 24: Student unions affiliated to the United Democratic Madhesi Front (UDMF) and opposed to elections of the Free Students Union scheduled for March 1, have set fire to the office of assistant chief of Thakur Ram Multiple College in Birgunj on Thursday.

The agitating student unions said they are opposed to the mixed electoral system proposed by the Tribhuvan University and want the election to be held on the basis of proportionality.

While the college administration staffers were registering the names of the student unions participating in the elections, pro-UDMF students barged in and set fire to the office of the assistant chief of the college. The fire has damaged the furniture, carpet and windows in the office. The agitating student groups said they resorted to arson attack as the college moved ahead with election preparations despite their disapproval.

College chief Roshan Lamichhane said as the college administration on Thursday morning had started registering the student unions for the elections, the protesting students came to the college demanding their unions also be registered and set fire disrupting the process.

Police have detained three student leaders affiliated to the UDMF for their involvement in the arson attack. Nikhil Barnawal of Sanghiya Vidyarthi Forum, Madhusudan Chaurasiya of Samajbadi Vidyarthi Sangh and Krishna Das of Sadbhawana Vidyarthi Manch are those detained.

After setting fire to the office of the college assistant chief, the protestors were about to set fire to another building when police intervened and brought the situation under control, according to college officials.

DHANGADHI, May 6: Student unions affiliated to the major political parties have jointly expressed their objection to the fee hike by... Read More...

A man from Lalitpur dies of coronavirus
15 hours ago

Will the budget be a sharp departure from the previous ones?
12 hours ago
VIDEO: Post-budget discussion
2 hours ago

Rs 5.02b allocated for displacing improvised cable crossings
5 hours ago