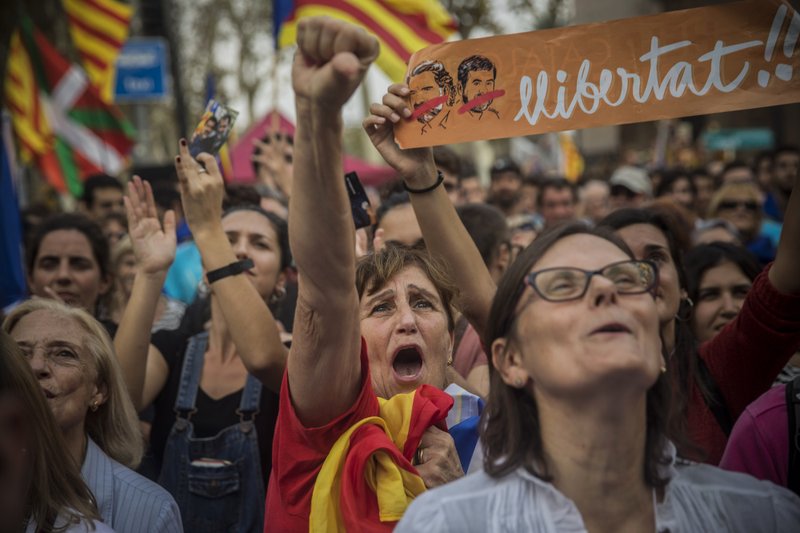 GIRONA, SPAIN, Oct 30: To sense the conflicting currents of identity that have led Spain to the edge of a constitutional cliff, look no farther than Girona, some 60 miles (100 kilometers) northeast of Barcelona. Maps and world governments say it’s in Spain — but many residents consider it part of an independent republic of Catalonia.

Amid the party atmosphere of a festival weekend, many in this secessionist stronghold cheered the Catalan parliament’s declaration of independence from Spain, a country they don’t regard as their own.

“I’ve never felt Spanish in my life,” said graphic designer Anna Faure as Girona celebrated the annual festival of its patron saint with food, music, a carnival and displays of the gravity-defying sport of human towers, known as castells.

Faure says castells is a true Catalan tradition, a view she doesn’t hold about Spanish icons such as bullfighting, which Catalan authorities have tried to ban, or Flamenco, an import from Andalucia in southern Spain.

Flamenco is fine, she said, but “it’s not mine.”

Many people in this northeastern region of 7.5 million believe Catalonia’s language, history and cultural traditions — even Catalans’ ironic sense of humor — set it apart from the rest of Spain.

That feeling of separateness has mixed with a volatile blend of wounded pride, economic pain and political animosity to create a crisis that could break up Spain.

The country has been in constitutional turmoil since Catalans backed independence in an Oct. 1 referendum that was dismissed as illegal by Spain. When the regional parliament voted Friday to declare independence, Madrid fired the Catalan government and called a new election.

No one knows how the crisis will end, but many Catalans feel it has been a long time coming.

“We wouldn’t have arrived at this point if they had treated us well for many years,” said illustrator Judit Alguero, expressing a common feeling that the authorities in Madrid are at best neglectful and at worst hostile to Catalan aspirations.

The seeds of that feeling, and of Catalonia’s modern independence movement, germinated during the authoritarian regime of Francisco Franco between 1939 and 1975. Franco banned the official use of the Catalan language and executed or imprisoned opposition politicians and activists.

Stories of that repressive era are part of the lore of many Catalan families.

Primary school teacher Ariadna Piferrer, whose grandmother told of being beaten for speaking Catalan at school, said that by declaring independence, “we are living the dream of our grandparents. And I think that’s so important for us.”

After Franco’s death, Spain became a democracy, and Catalonia was granted a degree of autonomy, with a regional government, its own police force and control over education. Public schools now teach primarily in Catalan, and national symbols are flown with pride.

While Catalan nationalism has flourished, support for outright independence was not widespread in the decades after Franco’s death. In the early 2000s, polls suggested only about 15 percent of Catalans wanted to break from Spain.

But in recent years, economic crisis and political hostility between Barcelona and Madrid have left many Catalans feeling wounded, fanning the flames of separatism.

Many here trace their support for independence to the political and legal battle over a 2006 autonomy agreement granting Catalonia the status of a nation within Spain, with tax-raising powers. Parts of the agreement were struck down by Spain’s constitutional court in 2010, triggering angry protests and leading some Catalans to believe they would never get a fair deal from Spain.

Catalonia is one of the country’s wealthiest regions, and many here feel they pay more into Spanish coffers than they get back.

Andrew Dowling, a specialist in Catalan history at Cardiff University in Wales, said that 13,000 businesses in Catalonia went under in 2009, pushing many moderate Catalan nationalists toward independence.

“The financial crisis made Catalans angry, that as a rich area they were suffering because they had no control over the economic levers,” Dowling said.

Against that backdrop, Catalonia’s independence movement has proved adept at harnessing discontent toward Madrid. A pro-independence coalition was elected in 2015 on a promise to push for succession, and well-organized groups have brought hundreds of thousands of protesters into the streets.

Independence leaders regard the Oct. 1 referendum as a mandate to separate. But turnout was only 43 percent as many pro-union voters stayed away and Spain sent in police to shut down polling stations.

In some areas, police clashed with independence supporters and removed voters with force, violence that pushed some previously undecided voters into the pro-independence camp. Two leaders of the independence movement have been jailed on charges of sedition, to the fury of many Catalans.

Dowling said “the Spanish government had a notion that Catalan nationalism was like a souffle” that would collapse with investment and economic growth.

He said that assumption led Rajoy into “a massive strategic error,” and the harsh reaction from Madrid has only hardened the determination of Catalan separatists.

No country has recognized Catalonia’s independence, and European nations, the European Union and the United States all have strongly backed the Spanish government.

Although pro-independence forces in Catalonia have shaken Spain to its foundations, it’s not clear how they can make their self-proclaimed republic a reality — or whether most Catalans even want them to.

Many pro-union Catalans believe they are a silent majority, drowned out by noisy supporters of independence. Hundreds of thousands of anti-independence protesters rallied Sunday in Barcelona, waving Catalan, Spanish and EU flags and chanting “Catalonia in Spain.”

“We want to be European, we want to be Spanish and we want to be Catalan,” said 18-year-old student Raul Rodriguez. Like many, he fears the economic consequences of a split. Some 1,700 businesses have already moved their official headquarters out of Catalonia because of the uncertainty.

“We are here because we want a good future and the people in the government of Catalonia are destroying our future,” Rodriguez said.

That apprehension contrasts with the excitement among separatists. In Girona, home town of ousted Catalan President Carles Puigdemont, narrow medieval streets are festooned in the colors of the independence movement’s red, yellow and blue estelada flag. The city hall flies Catalan and EU flags; the Spanish one has been removed.

Puigdemont was cheered by crowds shouting “President!” and “Long live the republic!” as he walked through the city Saturday.

Puigdemont has vowed to maintain “democratic opposition” to Spain’s direct rule. Independence supporters insist they want dialogue, and many say they will heed the call for peaceful resistance through strikes and demonstrations if Madrid does not listen.

“We are willing to take this to the limit,” said Joan Montardit, a 65-year-old photographer in Barcelona. “They have to finally understand that they need to respect our way of being, our language, the way we are.

“There are two alternatives: dialogue or truncheons,” he said. “Let’s see what happens.”

In a 'now or never' battle, govt set to bulldoze syndicate

KATHMANDU, April 4: Amid ongoing war against syndicate, the Department of Transport Management has come up with uncompromising steps to... Read More...