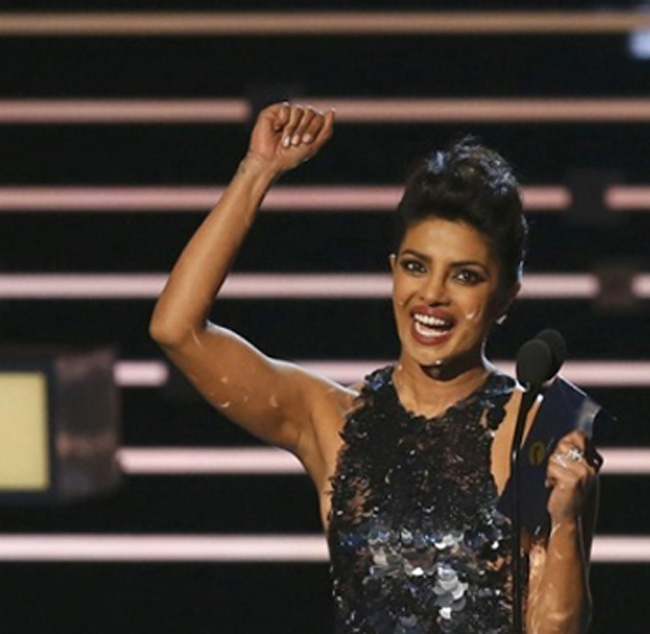 This is the 34-year-old actress' second People's Choice win, having been named the favorite actress in a new TV series last year.

After being announced as the winner in the favorite dramatic TV actress category, which also had KerryWashington and Taraji P Henson as nominees, Priyanka hugged her mother, Madhu Chopra, who accompanied her at the award show, before heading to the stage.

An "overwhelmed" Priyanka said she is honored to have been nominated alongside the likes of Pompeo, Davis and others.

"Thank you to the people. This has been an incredible journey. Every single woman that were nominated with me today, all these incredible actresses are the reason that I joined television," the actress said as her "Baywatch" co-star Dwayne Johnson cheered her from the audience.

"Being in the same category as them is so overwhelming. Thank you to all of you who have accepted me and loved my show, my wonderful cast... This means the world to me," said Priyanka, who chose a Sally LaPointe skirt and top for the ceremony.

Joking about her concussion, she said, "I am really excited. Can I do a little wiggle? Sorry it’s the concussion talking."

Priyanka was not the only Indian-origin star to be feted at the ceremony. Lilly Singh was named favorite YouTube star.

Earlier on the red carpet, Priyanka opened up about her minor accident which happened during the TV show's shoot in New York on January 12. She had slipped and fell, hitting her head. and was hospitalized. She was released soon after being examined by a doctor.

When asked if she was fit enough to attend the award show, the actress said, "I was a little nervous. I didn't know if I would make it, but I got so bored sitting on my couch for three days.

"As long as I don't do any action and stuff, I'm supposed to be fine. It was actually scary. I've never got hurt before on-set while I do stunts, I always do them myself. This was just a one-off," she said.

Actor and former Miss World Priyanka Chopra, who won the Favourite Actress in a New TV series award at the... Read More...