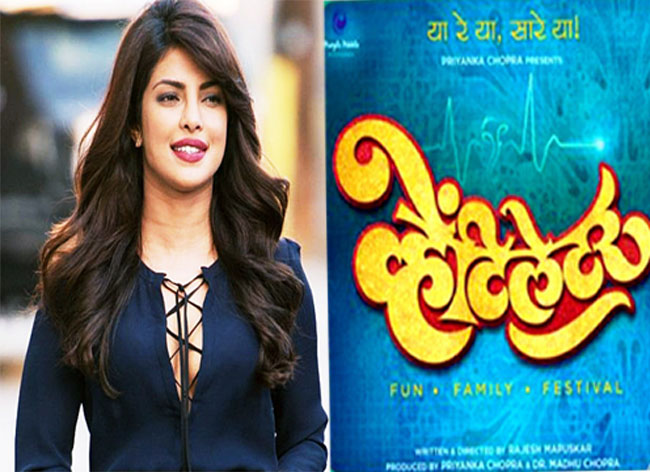 From furious movie buffs shouting against the organizers to the audience walking out of the hall after experiencing numerous emotions in 130 minutes, the world premiere of actress Priyanka Chopra’s debut Marathi production venture Ventilator here was a dramatic one.

The Marathi film, produced by Priyanka and her mother Madhu Chopra under their production banner Purple Pebble Pictures, has as many as 116 actors. Though not all of them attended its premiere, quite a few celebrities, including filmmaker Rajkumar Hirani, and their guests turned up whose seats had been reserved.

And that, did not go down well with some of the viewers who were eagerly waiting to catch the film, starring Ashutosh Gowariker, Sukanya Kulkarni, Jitendra Joshi, Sulabha Arya and Boman Irani.

As the premiere time approached, the moviegoers lined up to go inside the hall. Tired of waiting and watching the “invited guests” entering the hall, which is said to have 300 seats, they stepped aside and asked the guards to let them in.

“This is a festival and not a place for private screening,” one shouted. On seeing the chances of catching the film bleak, some even left.

“It’s a world premiere. I can’t tell them to not invite their guests. But the audience doesn’t consist of just the invited guests, we do have a mixed audience,” Jio MAMI with Star Festival Director, Anupama Chopra told IANS.

The tension-filled environment was just temporary. The moment Mapuskar, Madhu and Ashutosh took charge of the mic one by one, the fuming audience cooled down.

“I am happy to see non-Marathi faces. I’ve been to fests… standing outside, yelling and trying to make a place inside the auditorium which is completely full, and there is always one uncle who will make noise. So, welcome uncle,” the director said referring to one man who had expressed his anger for not letting him enter the hall earlier.

Priyanka, who is flying high in the West with the hit American TV series “Quantico”, couldn’t make it to the premiere, but her mother shared that the actress’ vision has always been to promote regional cinema and get them “access to the rest of the world”.

Filmmaker Ashutosh, who had earlier acted in “Kabhi Haan Kabhi Naa”, said that the film’s team was looking forward to share the movie with her. “It will happen soon…in New York itself,” he added.

He also revealed his unwillingness to return to acting. “I never wanted to come back to acting because direction is very difficult. I want to stay focused on direction. But Mapuskar kept on pursuing me for six months and he made my no turn into a yes.”

“Ventilator” revolves around an ailing senior member of a family who is being put on the ventilator just days before the popular Ganpati festival leading to varied degrees of speculation and panic amongst the clan he belongs to.

The arguments over small things with family members, a distant relative suggesting home remedies for hair loss or other problems or parents looking for bride or groom, the film presents situations faced by most people in India making it easy to connect with it.

“I was able to relate to the film. It’s true that despite staying in the same state, family members meet only when there is a wedding in the family or a funeral,” said a movie buff after the screening.

The team received a positive response from the viewers. Asked about plans to promote it, Madhu told IANS: “We are going on city tours. I hope it has a pan India release on November 4. We are planning to release it worldwide. That’s why the subtitles were in English so that everyone can enjoy the film. We are also getting invitations from festivals.”

Talking about other projects of her banner, she said: “We are doing many regional films. We finished a Bhojpuri film, we are finishing a Punjabi movie and then we will start off with a Rajasthani movie.”

The fans of Priyanka Chopra aka Alex Parrish have been desperately awaiting the season two premiere of Quantico, across the... Read More...