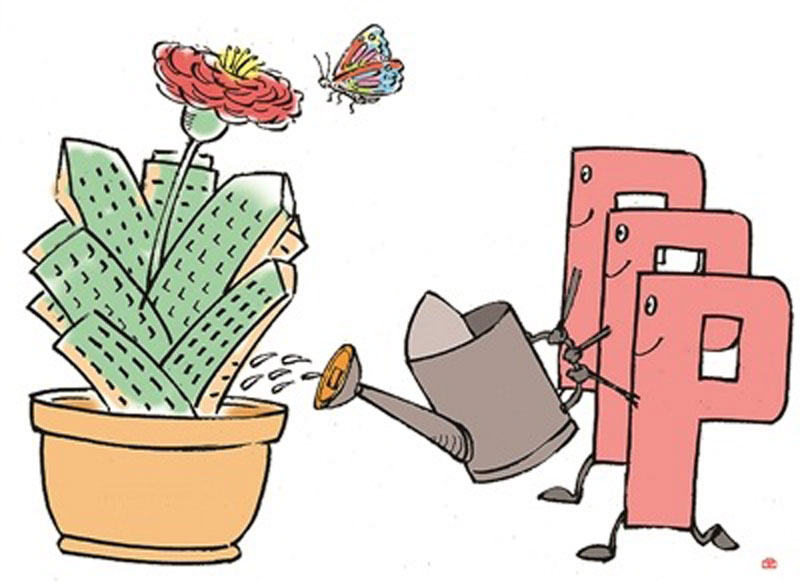 Nepal needs to remove legal barriers such as difficult taxation and unclear policies in order to encourage foreign investment
Infrastructure development is a big determinant of economic growth in Nepal. Investment in infrastructure creates production facilities, generates jobs, reduces trade cost, improves quality of life and helps reduce poverty. Infrastructure development also increases economic activities and productivity, social income as well as competitiveness of the economy. But Nepal has a dismal record on this front.

Around 81 percent of Nepali population lives in rural areas. As an economy matures with technological development and urbanization, demand for infrastructure increases. But this is not the case in Nepal. According to FinScope Survey (2014), 67 percent of adult population in Nepal has access to water facilities (tapped or underground), 77 percent has access to electricity for five hours-plus a day and 78 percent have toilet and sanitation facilities. So a large section of the national population is still deprived of even basic economic and social infrastructure.

Key growth drivers—such as agriculture and forestry, education, health, tourism, energy, transport, small and medium enterprises (SMEs) and information and communication technology (ICT)—can only contribute to economic growth only with the support of requisite infrastructure. Needless to say, Nepal’s goal of graduating from an ‘LDC’ to a ‘Developing Country’ (by 2022), achieving sustainable development goals (SDGs) and becoming a middle-income country (both by 2030) will also depend on major transformation in infrastructure sector.

Investment in infrastructure is thus a must for Nepal to prosper and to enhance the well-being of its citizens. An east-west rail link, a modern international airport, a metro train in Kathmandu valley, enough power plants to generate 24 hours of electricity for both households and industries, broad highways connecting all districts, they are all projects which, if they materialize, could vastly change Nepal’s fortunes. They will also enable us to become a Middle Income country by 2030. For this, however, we must lay a solid
foundation for these projects.

Everyone agrees that infrastructure development is a prime need of the country. But how do we go about it?

The government is set to host Nepal Investment Summit (on March 2nd and 3rd this year) to attract Foreign Direct Investment (FDI). It has also recognized the crucial role of private sector in nation-building as it promotes the Public-Private Partnership (PPP) model. The budget of current fiscal has proposed to establish Infrastructure Development Bank under PPP model.

In this context, Emerging Nepal Limited, a PPP model company, with shareholding from the government of Nepal, has been established to encourage investment in infrastructure. A number of high-value projects are being planned in the 14th National Plan. The Confederation of Nepali Industries (CNI) is also scheduled to host the Second Infrastructure Summit on 19th and 20th February 2017 to sensitize people on the need for infrastructure investment.

Despite these efforts Nepal still lags behind other countries in infrastructure. According to Global Competitive Index 2016, Nepal stands at 131st position among the 140 countries in terms of infrastructural development. Nepal has slipped to 107th in 2016 from 100th in 2015 in the Doing Business Index. This suggests that the procedures for doing business in Nepal are cumbersome.

Foreign diplomats and development partners have clearly said Nepal first needs to remove legal barriers such as difficult taxation and unclear policies to encourage foreign investment. According to the World Bank, Nepal requires about 13 to 18 billion dollar worth of investment, or about 8.24 percent to 11.75 percent of GDP per year from 2011 to 2020, so as to achieve its long-term goals.

Nepal has enormous challenges ahead. Absence of clear and long-term vision for infrastructure development, lack of capital, lack of skilled human resources to plan and implement high-value infrastructure projects, lack of equipment and skills to operate projects, difficult terrains and the lack of policy consistency are some of those challenges. In the absence of PPP Act and other legal and regulatory framework, the government is unable to execute PPP model projects and encourage international community and the private sector to participate in large projects.

There are no easy solutions to these problems. Infrastructure-development is by nature costly and complex. Just developing infrastructure without other support mechanisms may also not be sustainable. Therefore it is important to have clear vision and strategies for sustainable infrastructure development.

Nepal needs a sustainable Master Plan for infrastructure development that includes strategies, and social and development objectives. In this we may learn from Singapore. Its success over the past 30 years rests on its ability for long-term planning, with also putting in place an institutional framework to effectively implement those plans.

We in Nepal should also be mindful that the government cannot itself implement all the vital projects. This is why it should create an enabling environment for the private sector to take part in infrastructure development.

PPPs have been recognized as effective vehicles for public-service delivery. The public and private entities enter into a contract so that the private entity takes up the responsibility for some of the government’s services. In return, the private entity is remunerated as per agreed terms and conditions. Abroad, PPP model has been quite successful in attracting private investment, reforming sick industries through reallocation of roles, incentives and accountability and in increasing efficiency and use of available resources. There is no reason why this model can’t work in Nepal.

However, Nepal also needs to take into account the local context while selecting and implementing infrastructure projects. Nepal is a youthful country. According to FinScope survey, 23 percent of adult population in Nepal is under 24, 35 percent is between 25-39 and 23 percent is between 40-54 age groups. We should not hesitate to tap this well of human resource.

Labor intensive industries and infrastructures could be a great idea for Nepal. Nepal has around 40,000 MW of economically feasible hydropower potential, enough not only to meet our domestic needs but also to export some of it.

Nepal could also develop itself into a great tourist destination with its majestic Mount Everest, magnificent cultural heritage sites, nice climate and unmatched hospitality. Our cordial relations with India and China offer us big readymade markets.

Strong and visionary leadership, sound institutional framework, clear legal and regulatory framework, result-based bureaucracy and effective implementation mechanism will take us a long way towards our goal of building a prosperous Nepal.

The author is Chief Executive Officer at Emerging Nepal Limited, which enables public and private sectors to work together