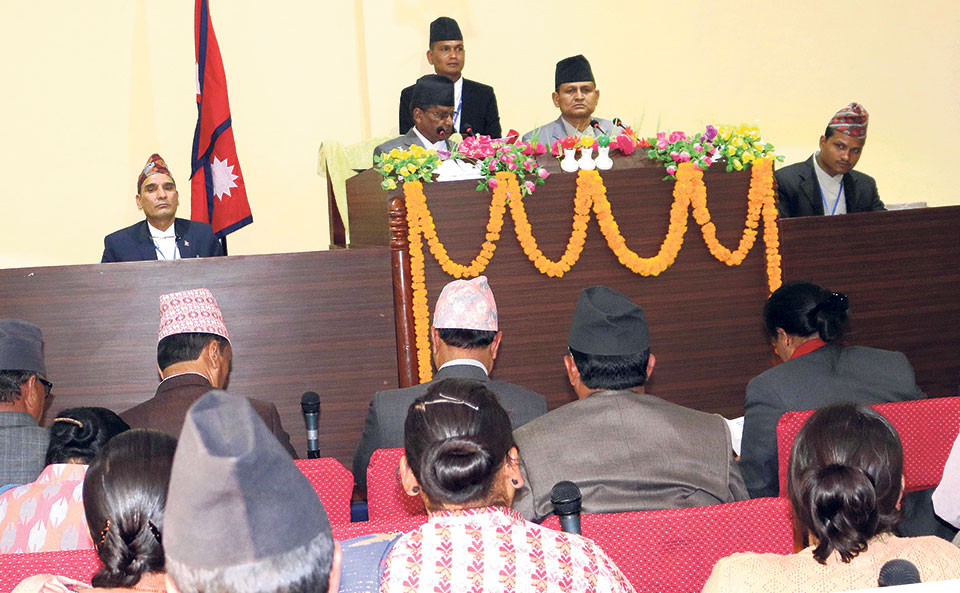 Governor of the Karnali Province, Durga Keshar Khanal, unveils programs and policies of the regional government on Monday. Nagendra Upadhyay/Republica

SURKHET, April 25:  The government of Karnali Province on Monday unveiled its plans and policies prioritizing tourism, infrastructure, herbs and hydropower sectors. Presenting it in the parliament, Governor of the province Durga Keshar Khanal stated that rapid development of the region is possible by focusing on the prioritized sectors.

“Tourism, herbs, hydro and infrastructure development are our development priority. These will lay the foundation for bringing prosperity to Karnali,” he said. “There is a need for researching these sectors and develop them. The action plans focuses on these sectors along with improving roads, communication and the trade points,” he added.

Khanal urged civil society leaders, think tanks, commerce and industries stakeholders and the general public to play productive role in making the dream of prosperous Karnali a reality. “In order to fight the challenges we have and tap the opportunities, stakeholders from all sectors must be equally positive, willing, and participating. I urge all the political parties, personals from all sectors, civil society and business sector members to join hands in this development drive,” he urged.

Karnali has always remained most backward in terms of development. In terms of health, education, power, communication and transportation, among other indicators of development, Karnali fares worst. Hundreds of children in the province still go to school risking their life in tuin (ropeway over rivers). Similarly, dozens of newborn and mothers die during delivery in lack of health services. Citing such scenarios, Khanal stated that there is a need of balanced and sustainable development in the region.

“They say that the power of Singhadarbar has now been transferred to villages. To make it fruitful, we need to be equally passionate and wise in our action. Our services should be quick, competent,” Khanal said. “Our province has remained most backward in terms of economic development. Now we must realize our ground and move ahead towards development,” he added.

Stating that the mountains have their own benefits, Khanal stressed on exploiting the opportunities and resources. While it is difficult to get fertile land in the hills, the lands however are better for herb production, he said. “So, we have to focus on what can we produce. Similarly, attracting more tourists to see our captivating mountains can open the door of prosperity for us,” said Khanal.

He added that the province has aimed to bring in half a million tourists in the coming one year. “We are going to develop it is a tourist hub. For that the process to register or renew hotels, lodges, travel and trekking agencies, trainings and seminars would be quite simplified,” he stated.

According to Khanal, Karnali will be soon recognized in the international arena as a great tourist destination. Tourism is going to develop faster than expected, he claimed. “The roadmap for development is very clear in our plans and policies,” he said.

Speaking on infrastructural development, he said that five major roads of Karnali would hopefully be included under national pride projects. “We are taking initiatives for it. If this happens, the roads will be developed faster. The roads that connect us to the China border are also in high priority,” he said.

He also stated that apart from Karnali corridor and Bheri corridor, Telpani - Bhurhigaun road block and Dang-Surkhet roads that connects to other provinces are in the government's priority list. “There are other road blocks in consideration, we are studying their feasibility,” he said.

The governor also talked about smart cities in Karnali. Scattered, unmanaged settlements will be developed into modern, scientific towns, he said. “There are plans for smart cities with all the basic facilities and services,” he said.

The governor also mentioned about power generation. Upper Karnali and other hydro projects are going to make huge impact on the development of the region, he said. “In coming five years, we are going to supply power to all local bodies. Nobody will be deprived of light,” he said.

According to Khanal, there are long and short term plans of the government and all are directed towards sustainable development of the province. “There is need to create employment and developmental projects as well as tourism sector is going to create huge difference in this,” he claimed. “Strategic steps would be taken to promote our culture, economy, social life,” he said.
NAGENDRA UPDHYAY/Republica

Governor of the Karnali Province, Durgakeshar Khanal, unveils programs and policies of the regional government on Monday.

KATHMANDU, May 21: The government is all set to present its policies and programs for the fiscal year 2018/19 at the... Read More...

Govt, ASDP and NACCFL sign deal for capacity buildings of cooperatives in Karnali
20 minutes ago