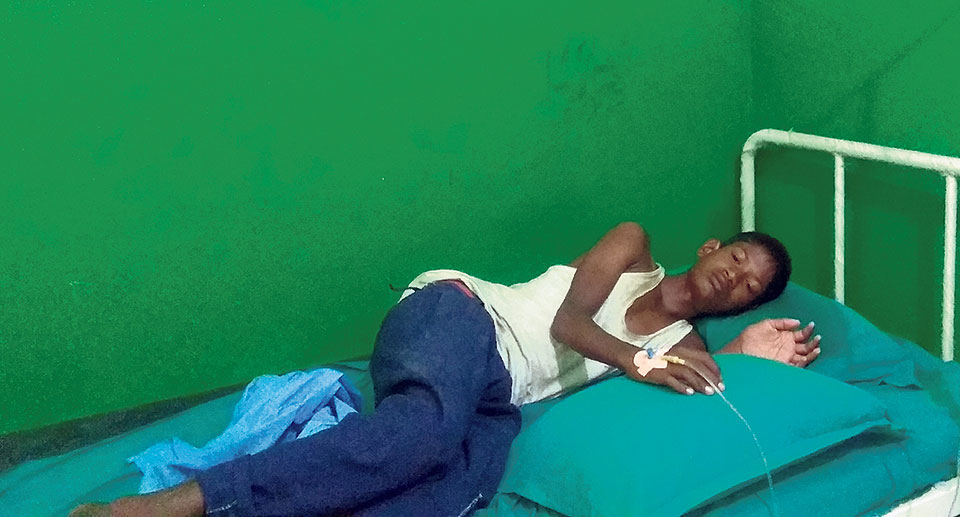 Sanjeev Sahani, a third grader who was injured in the beating by his school principal, being treated at a hospital in Barhawatha, Sarlahi on Monday. Mahendra Raya, the principal of Bagmati Community Basic School in Barhathawa in Sarlahi, had beaten up six students with a stick and knuckles at the morning assembly. Photo: Tanka Chhetri/Republica

SARLAHI, June 18: The headmaster of a community school in Sarlahi district has been accused of beating his students black and blue. One of the students allegedly lost consciousness for some time due to the thrashing on Monday while other five students have sustained injuries due to the teacher’s beating.

Injured Sanjeev, who later regained consciousness, said that Principal Raya had beaten five students along with him. He is undergoing treatment at Venus Hospital in Barhathawa. Hospital staffers told Republica that the injured student is being administered saline drip and other medication.

“In the morning, when we were gathering for the assembly at the school, he [principal] beat us with a stick. As the stick broke due to the thrashing, he started punching us with his fist,” said Sanjeev. “After that, I fell to the ground. I don’t know what happened next. When I regained consciousness, I was in the hospital bed.”

He said the teacher also beat up Tetari Devi, Bisunder Sahani, Santanu Sahani and Bibek Sahani, among other students of his class.

Elected chairman of ward-1, Ratna Bahadur Giri, accused the principal of behaving with little children in an inhumane way.

“We had worked hard to encourage the local children to go to school by providing them bags, shoes and snacks at school,” said Giri. “Such behavior by the principal will now terrorize the students.”

A teacher of the school Bhuwaneshwar Sahani said that the principal beat up the students for not queuing up straight and not following instructions during the morning assembly.

Principal Raya, however, refuted the allegation that he thrashed the students.

“I hit the students lightly to maintain discipline while conducting exercise after they didn’t follow the instructions,” said Raya. “They might have lost consciousness briefly as they were exercising for a long time. But it’s not because of the beating.”

Principal Raya had courted controversy repeatedly for his decisions in the past.

Teacher fired for not admitting her son to community school

PYUTHAN, May 28: Mandavi Rural Municipality has made it mandatory for all those receiving salaries from the government coffers to admit... Read More...

SURKHET, May 20: Liladhar Chapai of Gurvakot Municipality had decided that his children would attend private school even before they... Read More...