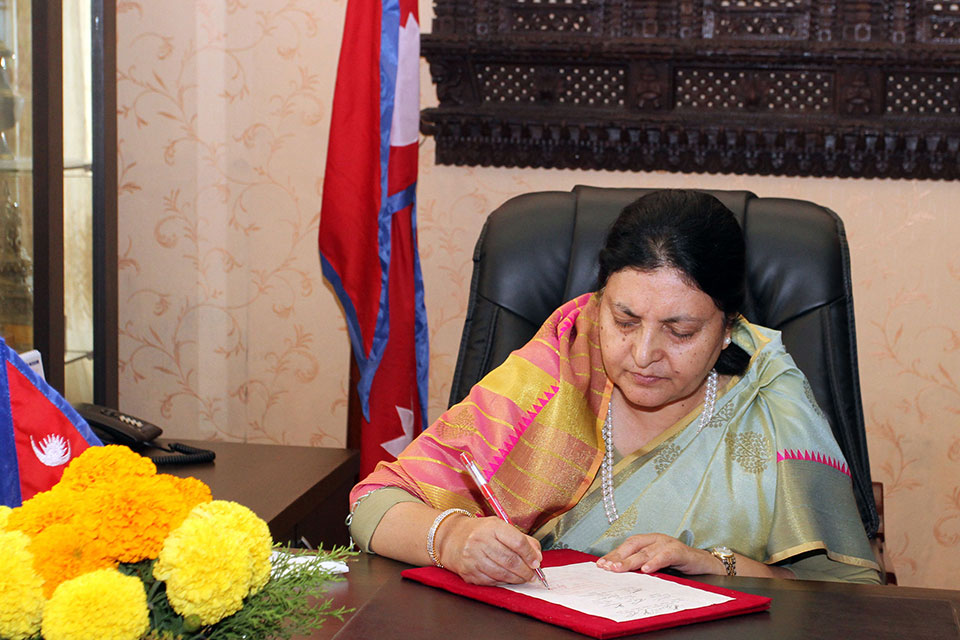 KATHMANDU, Dec 10: President Bidya Bhandari on Sunday endorsed the Civil Servants Adjustment Ordinance 2018, clearing the way for the federal government to depute civil servants to the provincial and local governments.

Of the total 123,000 civil servants envisaged by the ordinance in the country, 45,000 will be kept under the central government, while 21,000 will work for provinces and 57,000 for the local governments.

The government was forced to draft a separate law to this effect after civil service trade unions protested against the Civil Servants Adjustment Act introduced last year. The act had no provision for grade hike or promotion as demanded by the civil servants, and the trade unions challenged the government to implement it.

Civil servants choosing adjustment at the provincial and local levels will not get an opportunity to get transferred to the federal services or to other provinces. However, the ordinance has paved the way for transferring them to other local units under the same province.

The government will give priority to considerations such as seniority, current province or local unit, permanent address, the address mentioned in the citizenship certificate, and age while deputing civil servants to provincial or local government offices.  According to the ordinance, the government will give preference to adjusting spouses in the same province or local unit. The ordinance also proposes a recommendations committee headed by a Public Service Commission member.

The ordinance has also provisioned for the province or local unit concerned to arrange the salary and perks for civil servants under their service as well as severance, pension and other incentives.

KATHMANDU, June 27: A total of 71 local governments have failed to announce their budgets on time this year despite the... Read More...

KATHMANDU, Mar 4: Finance Minister Yubaraj Khatiwada, who has also been entrusted with the Communications and Information Technology portfolio, has... Read More...