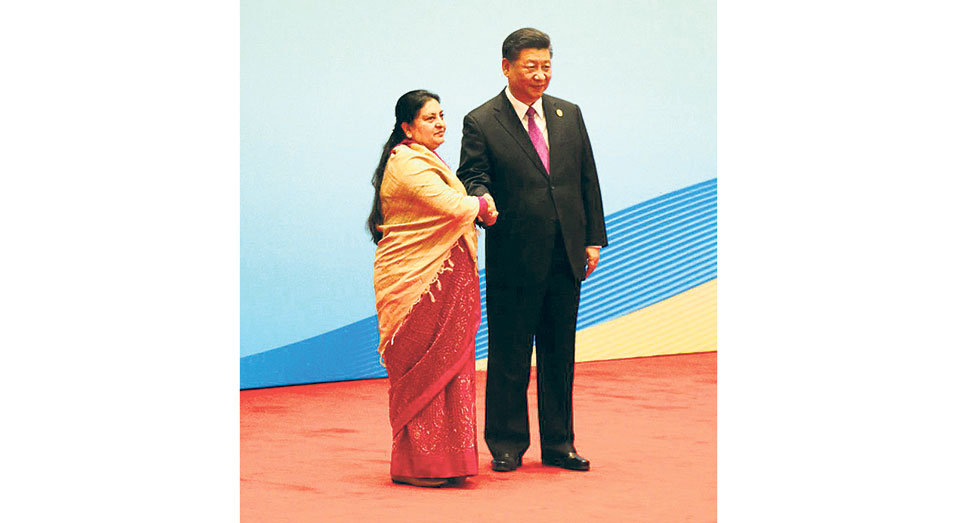 President Bidya Devi Bhandari with her Chinese counterpart Xi Jinping in Beijing on Saturday during her official visit to China. Photo: MoFA/Twitter

BEIJING, April 28: President Bidya Bhandari has said that the Belt and Road Initiatives (BRI) of China will support the economic transformation of Nepal, expanding its connectivity to the global market.

Addressing a roundtable on ‘Promoting Green and Sustainable Development to Implement the UN 2030’ during the second BRI Forum in Beijing on Saturday, President Bhandari said she was happy to find that the BRI goals also correspond with the agenda of a sustainable development goal through development and prosperity.

“We believe that this initiative will support the process of economic transformation of landlocked Nepal by expanding its connectivity networks and integrating its economy into the global market,” she said. “We have laid primary emphasis on the development of a Trans-Himalayan Multidimensional Connectivity Network under the BRI.”

She further stated that in a country like Nepal BRI will “contribute to eradicating poverty, deepening and expanding trade, revolutionizing industries, creating jobs and improving the living conditions of the people by increasing economic opportunities.”

According to Gyawali, Xi also reiterated his commitment to support Nepal in realizing the goal of ‘Prosperous Nepal and Happy Nepali’.

President Bhandari addressed the round table of the BRI Forum in north-west Beijing on Saturday along with President Xi, United Nation Secretary General Antonio Guterres and the presidents of the Philippines, Portugal, the Czech Republic, Switzerland and other countries.

In her speech, Bhandari also drew the attention of the BRI Forum to climate change impact in Nepal. “The clock of caution is ticking louder when it comes to climate change,” she said. “Unfortunately, countries like Nepal are bearing the brunt of climate change despite their negligible emissions.”

Stating that women and underprivileged communities have become the first victims of climate change impact, Bhandari stressed the development of a green economy. Calling for a review of development models, she insisted on keeping the environmental perspective at the center during development activities. “To minimize the environmental risks, scientific researches and solutions based on them should be sought,” she said.

Bhandari also said BRI could be an important medium in transforming to clean-energy and low-carbon pathways for the economy.

She was of the view that Nepal had tremendous potential for developing clean energy through hydropower projects, which could contribute to green development in neighboring countries as well.

President Bhandari briefly met Chinese President Xi during the closing of the session on Saturday. An official meeting between Xi and Bhandari is scheduled for Monday. Bhandari is slated to return to Kathmandu on Thursday after concluding her nine-day China visit.