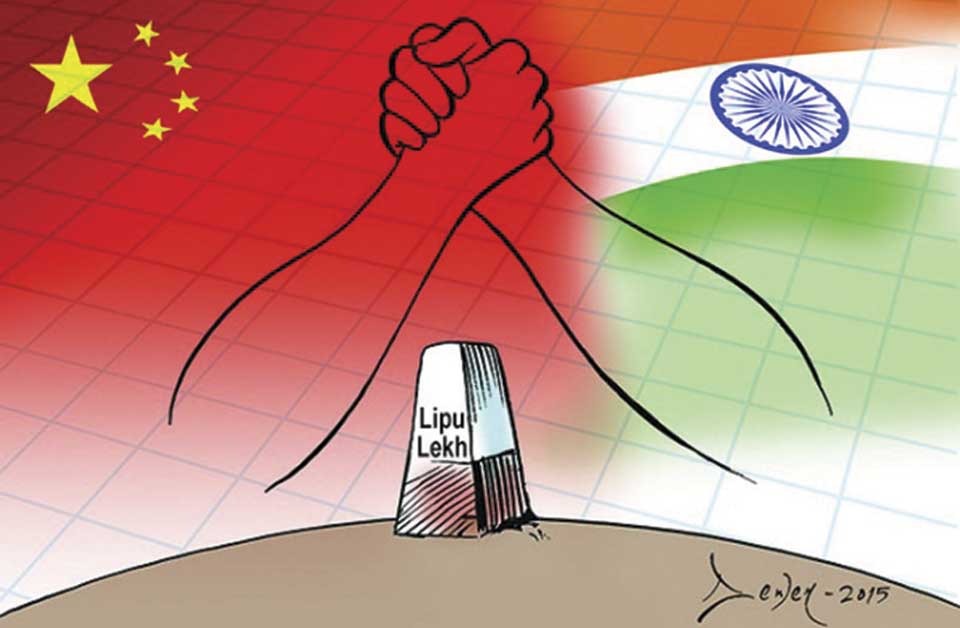 If PM Modi can manage Kashmir, Doklam, Aksai Chin and Arunanchal Pradesh, and border dispute with Nepal, he will be successful in South Asia.

Indian Prime Minister Narendra Modi’s proposed visit to Nepal—the third since he assumed office in 2014—has great a significance for Nepal. The visit follows immediately after his trip to China where he might have gained President Xi Jinping’s view on Nepal’s changed politics, KP Sharma Oli government and his endeavor for communist unity. Oli’s recent visit to India was taken merely as a routine by many. The major decisions are likely to be taken during Modi’s visit which will have reflection of what Xi might have suggested him.

The agreement like on Lipulekh pass that India and China signed in May 15, 2015, without consulting Nepal remains one of the pressing issues. Nepal has claimed entire Limpiyadhura and Lipulekh as its integral territory. Kalapani is presently occupied by Indian Army after Sino-India war in 1962. Lipulekh as is equally important for Nepal as Doklam for Bhutan where both India and China are working to derive strategic gains. They want to exploit Likulekh for their collective advantage at the cost of Nepal.
Nepal is in favor of enhancing connectivity, but ignoring its participatory role is really a matter of concern. Every country wants share of its contributed resources but Nepal was neglected on Lipulekh. The issue will be different if India agrees to Belt and Road Initiative (BRI) that will be productive even for Nepal.

Just as Bhutan is cautious to
safeguard Doklam,
Nepal must take
care of Limpiyadhura
and Lipulekh, territories which belong to Nepal.

India is going to be a full-fledged member of Shanghai Cooperation Organization soon. Pakistan will also be member in this partial military pact. Nepal has decided to become a dialogue partner to it. How India and its long-term rival Pakistan will accommodate China’s greater interest in South Asia will definitely dictate Xi Jinping’s global maneuver. The decisions Modi could have taken during his recent China visit could dictate overall South Asian stability in the days to come.

During Nepal’s foreign minister’s visit to China in April, the think tanks including former Chinese ambassadors to Nepal raised concerns about cause of delay in left unity for the first time. This has been interpreted by some in Kathmandu as interference on domestic affairs. On the other hand, three former Indian envoys to Nepal came trek the western mountains and also met with some political leaders in Kathmandu.  This cannot be only a coincidence.

Modi-Oli impressions
Modi impressed all Nepalis during his first trip to Nepal in August, 2014 with captivating speech. He made a lot of promises and expressed a lot of commitments. During his second for SAARC Summit the same year, his desire to visit Janakpur Dham and to distribute bicycles was highly politicized as he wanted to influence Madhes in his favor and this would seriously impact Nepal’s unity. His wish to visit Lumbini and Muktinath were also tagged in the similar line.

Nepal’s relation with India soured after Nepal promulgated the constitution and India imposed economic embargo. After three tiers of elections and forming of new government under KP Sharma Oli, this relation has become normal largely.

The government of Nepal is preparing to sign some agreements on time-bound railway link construction, expediting Pancheshwor Multiple Project and Kosi River based Ganga waterways. Construction of Kosi high dam is highly controversial in Nepal as it will not only displace large number of people but also damage huge arable land in Tarai. Only time will tell how Nepal will convince people.

PM Modi is charismatic orator and successful leader. His policy has been highly successful to make world leaders to look at India as global power. Under his dynamic leadership, he converted his country’s potentials to be recognized globally. He could successfully manage Indo-Bangladesh border issue. If he can manage Kashmir, Doklam, Aksai Chin and Arunanchal Pradesh with China and the border dispute with Nepal, only then he will be considered successful in South Asia.

Oli has different tasks ahead of him. He wants unity with Maoist Center to strengthen his hold in the government and the federal parliament. His plan to bring Madhesi parties on government board has not materialized due to their demand for constitution amendment. Oli has multiple personality images in Nepali politics. He changes himself frequently depending upon the situation. He was ultra nationalist when there was Indian embargo and main opposition Nepali Congress fears that he could slowly display dictatorial tendencies.

Issue to raise
In the joint press conference held in Beijing, Chinese Foreign Minister Wang Yi indicated that China could seek cooperation of India on Nepal’s development. This shows that PM Modi and President XI Jinping could have detail discussion on to manage geopolitically sensitive neighbors like Nepal but also how to secure their interests in the entire region.
In this situation, just as Bhutan is cautious to safeguard Doklam, Nepal must take care of Limpiyadhura and Lipulekh. Development is secondary to sovereignty and territorial integrity of a nation. Therefore apart from other development concerns this particular issue must be raised during Modi’s Nepal visit.

The author is strategy and security analyst.

Many watched the video of Radha Chaudhary being beaten mercilessly for practising ‘witchcraft’ with horror. It was the sort of... Read More...

KATHMANDU, Dec 29: Brushing aside criticisms that the current government was insensitive toward the concerns of the northern neighbor, Minister for... Read More...