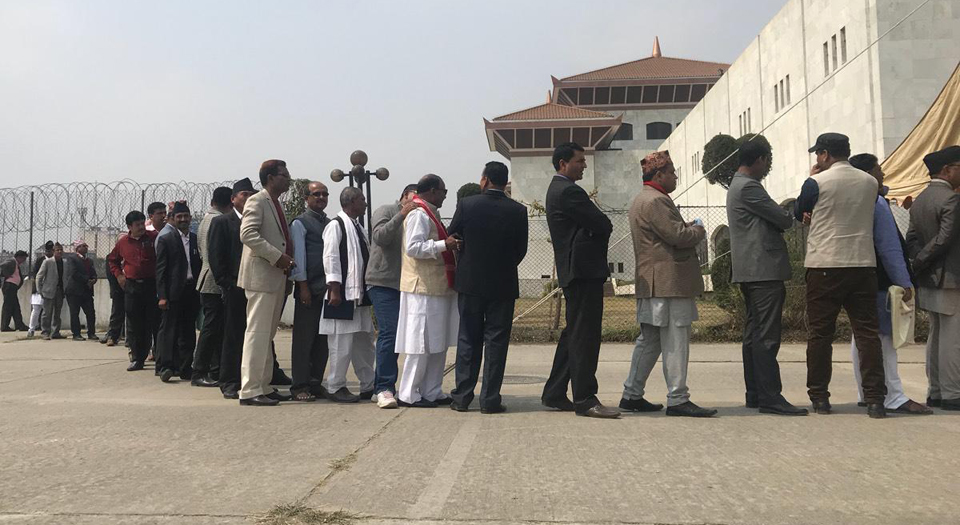 Parliamentarians are in queue for voting. (Photo: Keshab Thoker/Republica)

KATHMANDU, Mar 13: Voting to elect President has been underway in the Federal Parliament at New Baneshwar since 10 am today.

Members of the Federal Parliament and all the seven provincial assemblies, chief ministers, speakers and ministers of the provinces gathered at the parliament building to elect the head of state.

This is the third election to elect the president since the country adopted Federal Democratic Republic system nine years ago. Two presidential elections were held in the past. Dr Ram Baran Yadav was first elected as president in 2008.

Incumbent President Bidya Devi Bahdari succeeded Yadav as the second head of the state. Backed by the left coalition of ruling CPN-UML and CPN (Maoist Center) and some other small political parties Bhandari is running for the second consecutive term in office. Likewise, former lawmaker Kumari Laxmi Rai is a candidate of the main opposition Nepali Congress.

With ruling coalition commanding a nearly two-thirds majority in the parliament, Bhandari is all set to win the post for the second term.

A total of 880 members of the Federal Parliament (House of Representatives and National Assembly) and Provincial Assemblies will cast their ballot in the elections (549 provincial assembly members, and 331 parliamentary members).

The voting began at 10 am and will continue until 3 pm today. Separate polling centers have been set up for members of Federal Parliament and Provincial Assemblies. Likewise, separate lines have been arranged for male and female voters.

KATHAMNDU, Oct 24: All Nepal Football Association (ANFA) will get a new president for remaining one year period through special general... Read More...

Respect the Rule of Law, Mr Prime Minister!
22 hours ago

Nepal’s cultures, heritages should be promoted at int’l level: PM Deuba
28 minutes ago

One killed, one injured in landslide
2 hours ago